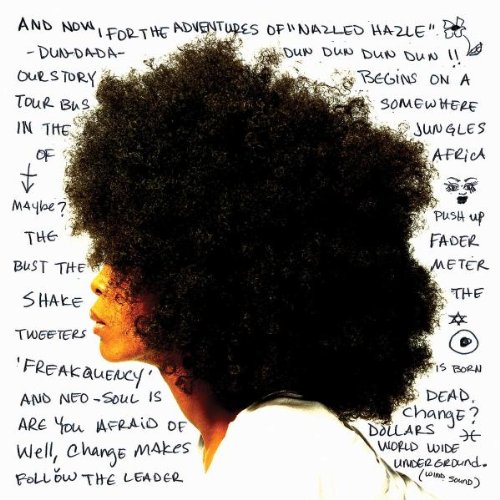 Eryka Badu is always a human being whom I admire and respect,even more so after reading her recent interview for Wax Poetics magazine. She’s insightful,has a good socio-musical understanding and manages to deal with her unique variation on Afrocentrism very well. One of the things I will say about her though is that musically she often has some level of difficulty bringing her ideas into a clear musical focus. Her “neo-funk’ sound always grooves with jazzy rhythmic touches and as much electric piano layering and psychedelic soul musical touches as she can pack into her music. As such the three-four minute pop is not exactly her friend. On this album there’s a concerted effort to remedy that. This album,originally intended as an EP is a ten track album running about ten minutes short of an hour primarily featuring songs of either very short or very long in length.

The overall effect is not so much that of a jam band mentality but more over that of stretching out her broadly chorded and scoped melodies and harmonic effects to their maximum limit. That is exactly what happens on “Bump”,”Back In The Day (Puff)”, and “I Want You”. The overall songs stick within her basic musical framework:spare funk with an MG’s like quality of every instrumental lick counting although it’s loose rather than precise and far far cleaner produced,with puncuated bass synthesizers added for an important measure. The songs also totally split apart by the end,either with a few minutes of free form vocalese or simply slowing the tape down gradually on the songs conclusion. On “The Grind” and “Danger” she brings more hip-hop up front as she brings out that the modern inner city problems of money and the stress that comes with it are as if not more vital today than they were during the period when the music that inspired her was originally being made and the rapping in the songs,by her and others further look to that concept.

Her lyrical focus on general,sometimes non sexual romance (either internally or externally focused) are similarly open ended. The album comes to a very strong conclusion with “Think Twice”, a song in her signature style with fully acknowledges the strong influence of Donald Byrd in her music as well as “Love Of My Life Worldwide”,a more mid length and very well crafted funk song (emphasize song) with a rap provided by Queen Latifah and a very dynamic and inventive bridge. As with just about everything Erykah Badu does musically one does have to expect the unexpected from this album. That is after all part of the essence of who she is as a person and an artist and the lines aren’t as far apart as one might think. Because of the extended runs here she is about to find a little more focus than usual by stretching out the songs so her broad approach doesn’t seem too confined and held back and for the listener and music lover it’s an excellent way to present her artistry.