Like I said last week, it isn’t really fair to describe Sheila E. as a “Prince protegé” in the typical sense of the world. Born Sheila Escovedo, she has an impressive musical pedigree all her own: the daughter of Mexican American percussionist Pete Escovedo and the goddaughter of Latin jazz pioneer Tito Puente, her professional recording career actually predates the Purple One’s; she made her debut on Yesterday’s Dreams by former Weather Report bassist Alphonso Johnson in 1976, two years before the release of Prince’s For You. Prince was, however, responsible for introducing her to a pop audience during his mid-1980s “purple reign”; the pair were also briefly engaged, which places Sheila in Prince’s long, dubious tradition of falling for his muses, only to discard them once the next one came along. Still, theirs was much more a relationship between equals than was typical for Prince, either romantically or professionally; their mutual respect was evident in their renewed collaborations over the years, with Sheila frequently joining Prince for guest appearances and touring stints well into the 2010s.

While these distinctions are important, however, in many ways Sheila’s 1984 debut The Glamorous Life is a bog-standard Prince protegé album. Though his lead artist was a world-class percussionist in her own right, Prince still micro-managed the production almost as much as he had the Time and Vanity 6; his guitar and guide vocals are more prominent on the instrumental “Shortberry Strawcake,” for example, than Sheila’s drums. Still, he does at least give her some props: production on the album is credited to Sheila as well as the usual purple shell corporation “the Starr Company,” and she co-wrote the gauzy ballad “Noon Rendezvous.” Her influence can also clearly be heard on “Oliver’s House,” which grooves almost as hard as Prince’s “Erotic City“; and of course, the classic title track–almost an Apollonia 6 song!–finally allows her to cut loose.

The following year’s Romance 1600 picked up where “The Glamorous Life” (the song) left off, with a more pronounced jazz influence–the manic introduction to opening track “Sister Fate” prefigures Sheila’s and Prince’s work in the fusion side project Madhouse–and much more prominent contributions from E. as a percussionist. One song, the preposterously-titled “Merci for the Speed of a Mad Clown in Summer,” was recorded entirely without Prince’s input. Even when Prince is clearly pulling the strings, however, Romance is a more confident and interesting listen than its predecessor, bristling with the neo-psychedelic invention of the post-Purple Rain era. And of course, “A Love Bizarre” is one of the most indelible pop-funk jams in either artist’s discography.

The next collaboration between Prince and Sheila E. didn’t actually show up on an album at all. The faux-rap “Holly Rock,” a kind of dry run for “Housequake” on Sign “O” the Times, was a loosie for the 1985 hip-hop film Krush Groove, in which Sheila starred–and where her band’s New Romantic-inspired fashions were reportedly a figure of derision for many of the real-life B-boys on set. In the meantime, she continued to keep busy as a de facto member of the Revolution, contributing to the 1986 album Parade and joining the band on tour (that’s her drumming and, er, rapping on the live cut turned album track “It’s Gonna Be a Beautiful Night”). After the Revolution split up later that year, she joined Prince’s band full time, supporting him for the Sign “O” the Times and Lovesexy albums and tours, as well as the aforementioned Madhouse project.

Sheila’s final, self-titled 1987 album on Paisley Park is also probably her most underrated. Produced by Prince and Sheila with David Z., much of it is firmly in the stylistic territory of Sign “O” the Times, with extensive contributions by members of Prince’s touring band at the time: including guitarist Levi Seacer, Jr., singer/keyboardist Boni Boyer, saxophonist Eric Leeds, and trumpeter Atlanta Bliss. Granted, parts of it are also a transparent bid for the adult contemporary charts, with tracks like “Hold Me” and “Faded Photographs” failing to distinguish themselves from most generic late-’80s pop/rock. But all of the Prince-related tracks–opener “One Day (I’m Gonna Make You Mine),” playful single “Koo Koo,” “Anotherlover”-esque pop cut “Pride and the Passion,” fluffy Klymaxx-alike “Boy’s Club,” and closer “Love on a Blue Train“–are all well worth a listen. 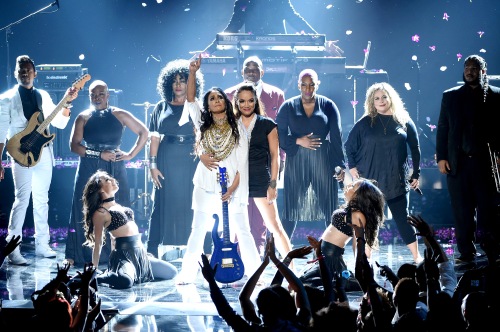 After an aborted followup album that remains unreleased, Sheila E. made her departure from the Prince camp in 1989–though, as noted above, she would return frequently to his orbit, making memorable appearances on Prince’s Live at the Aladdin Las Vegas DVD in 2003 and his Coachella Music Festival performance in 2008, among others. After Prince’s death this April, she was on many a fan’s shortlist to head up the inevitable award-show tributes–which indeed she did, closing out the show at the 2016 BET Awards last month with a monster medley of “Housequake,” “Erotic City,” “Let’s Work,” “U Got the Look,” “A Love Bizarre,” “The Glamorous Life,” “Soul Salsa,” “America,” and “Baby I’m a Star.” The man himself would have been proud.

Sheila E. is currently at work on her eighth studio album: a two-disc set entitled Girl Meets Boy, comprised of half dance-oriented songs recorded prior to Prince’s passing and half tributes to his memory recorded after April. The title track, released as the album’s first single the day after the BET Awards performance, is a decidedly Prince-flavored ballad featuring Sheila solo on piano accompanied by a delicate string arrangement. Sheila recently told Billboard that her mission is “to continue [Prince’s] legacy in a way that is just about his music.” She’s been doing a fine job so far, and I can’t imagine another solo artist better-suited for the task.

This time next week, I’ll be posting about a lesser-known–and much shorter-lived–Prince spinoff act, the Family. As always, feel free to keep up with my other writing on dance / music / sex / romance (my song-by-song chronological Prince blog)  and Dystopian Dance Party (my catch-all pop culture vanity blog). Thanks for reading!