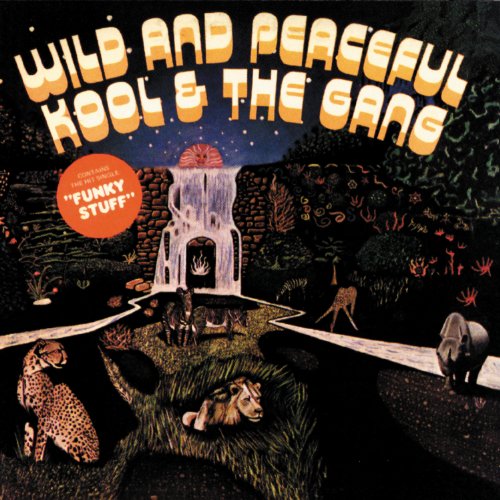 It would take a very long time to even begin to explain why I’ve neglected purchasing this album for such a long time. It would also take a long time to explain my viewpoints on funk music at this point. All I can say is this. A friend of mine once described funk as the “punk music of the black community”,mainly in the sense it was the hardest edge (and by and large most sociopolitical) of the soul music genre. Difference was funk required a very high level of musicianship,usually in a band context to bring out the best in it.

When this album came out Kool & The Gang had been a musically successful recording and performing band for almost half a decade. And had released loads of excellent music,both in the studio and live. But something clicked with this release. It was the “united funk” era. And the music in every sense was in it’s peak period. And this is one of a slew of albums that represents that.

This album got three big pop chart hits for Kool & The Gang,their first if I recall with “Funky Stuff”,”Jungle Boogie” and “Hollywood Swinging”. These songs are 100% first period era K&TG: with the heavy horns,dynamic rhythms and these looseness of playing that defined the bands sound. Aside from that this albums goes deep into another important factor of the funk. Though almost a breezy ballad the conversational “Heaven At Once” finds an adult and teenage man engaged in a dialog over what they should expect of themselves in society.

“This Is You,This Is Me” offers a really charged up rhythmic section,with a churning bass/guitar and the message of “in the ghetto I’ve never seen a tree/this is you/this is me” indicating funks central message of the celebration of difference rather than us all being alike. On “Life Is What You Make It”,it’s a very upbeat and empowering groove. The album ends on the 9+ minute title song,a soothing jazz oriented instrumental number giving members Spike and Dee Tee,on trumpet and flute respectively more chances to solo.

In a way this album links one era of Kool & The Gang to the next. Earlier on in their career,before this album they’d been a band that emphasized instrumentation more than vocals. Their vocal set up was even looser than their sound was. Even when the harmonies were looking to be close. They seemed to be a band more about music than getting pop hits. Somewhere along the line with this album,pop hits found them. Although in two cases on songs that had a very implicit sexual impulse and one that celebrated their success.

At least I’d like to hop it attracted people to the album because the non hit material is often what has the most musical and lyrical value. The message of this album is one that the band would continue on with over the next several albums: a strong awareness of Afrocentric spirituality and a call for unity among all those deemed as unique. This was the conclusion of one era for the band but the beginning of another. But that’s another story.