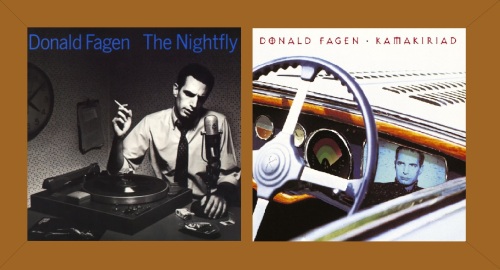 Donald Fagen is someone whom I’ve neglected exploring on Andresmusictalk. And Steely Dan for that matter. Its a major goal for the blog to remedy that this year. Fagen will be one year short of 70 years old this coming Tuesday. And to start that celebration of the man and his music,wanted to start out by discussing the beginning of his solo career. It all began as an outgrowth from Steely Dan at first-utilizing some of the same session musicians such as Greg Phillinganes and Hugh McCracken. He also centered on similar jazzy melodies and his signature processed Fender Rhodes electric piano.

Fagen once discussed his 1982 debut The Nightfly and his follow up a decade later in Kamakiriad as representing the arc of his life. Conceptually his debut focused on his adolescence during the early 60’s during JFK’s “new frontier”-actually one of the song titles. The following album acts as a similar character dealing with middle aged situations,and tentatively looking to the future. Musically both albums reflect the change. The Nightfly sounds like a straight Steely Dan album for the most part. Kamakiriad adds some early 90’s drum programming and electronics on some of its songs.

These two albums are strongly linked to a sense of nostalgia in my own life. Hearing songs such as “IGY” and “Greenflower Street” while driving to pick apples with my parents while in the 4th grade. A local supermarket playing the whole album while at one point in the 90’s. Then there was hearing “Tomorrow’s Girls” on the radio for the first time-as well as “Florida Room” being a major ear worm while vacationing on my 30th birthday with my family in Tampa. Each of the songs on this albums are noteworthy for discussion. In the end though,best to deal with the entire albums themselves.

During his period as half of Steely Dan for all intents and purposes Donald Fagen’s lyrical focus had always been on sly,cryptically phrased musings on the various twisted urban misfits surrounding him and Walter Becker in New York City and LA. It became a trademark. But Fagen had another side to him and a lot of it had to do with a completely middle American existence in 1950’s suburbia. From the stark black and white back cover photography of tract housing to his somewhat ambiguous manifesto written on the back this is certainly a very clever way to differentiate Fagen as a solo artist outside Steely Dan.

Musically this album is not in fact too different than [[ASIN:B00004YX39 Gaucho]] but the sound of the album is quite a bit more full and keyboard oriented. It could easily have been a Steely Dan album since all of the same musicians that you’d find on a latter period Dan recording and the same polished sound,enhanced further by the fact that this is one of the earliest full digital recordings ever made. Songs such as “I.G.Y”,”Greenflower Street” and the wistful shuffle of “Walk Between The Raindrops” explores the pseudo futurism and often ironic romanticism of post WWII America with Fagen wittily crooning about “getting your ticket to the wheel in space”.

The funkified “New Frontier”,named for JFK’s famous slogan gives a similar treatment to an atomic age fallout shelter romance Fagen may or may not have genuinely indulged in during his young. That romantic end of the theme is again explored in the ballad “Maxine” with some wonderfully multi tracked vocals as well as the well received cover of “Ruby Baby”,adding to the period flavor. The title track stars Fagen as “Lester The Nigthtfly”,a graveyard shift DJ broadcasting “jazz and conversation” while taking some eccentric call in’s along the way.

There’s also a noir-ish political intrigue Cuban revolution-era sendup on the breezily percussive “The Goodbye Look”. Even though the album has a unified lyrical and musical theme it also contains enough variety and charm to make it work in many context,from the audiophile to the irony of hearing this entire album played beginning to end for years in the local supermarket. Either way it’s one of the most welcoming and clearly defined of the all the Steely Dan related releases and was the best possible way for Fagen to begin his career on his own.

From the start Donald Fagen has always been a very smart man. Most of the creative decisions he made in Steely Dan tended to be the correct ones,as much of a perfectionist as he tended to be. Likely that was part of it. After his enormously successful solo debut [[ASIN:B000002KXV The Nightfly]],very much an extension on Steely Dan there was a decade long gap between albums. And when this finally emerged it was very much a Steely Dan album in all but name,featuring production and playing from Walter Becker. Something more interesting was going on though.

Part of the appeal of Steely Dan,in terms of their lyrics,was their devotion to very implicit (sometimes cryptic) uses of language. You didn’t always know exactly what they were talking about. Sometimes you got the impression you didn’t want to. This came along at a time where most popular music of the time was stating things in highly explicit ways. You’d think Donald Fagen would have trouble surviving in this environment of harsh music and lyrics. Actually he turned that very much to his advantage.

For starters the focus of this sophomore solo set is the flip of the first one. Where on that he was looking back upon his youth,here he was looking forward on middle aged. And considering we’re talking about one of the most perceptive modern songwriters this side of Joe Jackson,he’s got plenty of stories to tell. He’s very much the observer on “Trans-Island Skyway”,”Countermoon” and “Springtime” that open the album. These are grinding funk jams with some JB like guitar licks and breaks but with this ultra clean production and elaborate pop tunes mithing he was known for.

The somewhat slower “Snowbound” has a lovely sound even as it deals with a midlife crisis. “Tomorrow’s Girls” is very much [[ASIN:B00003002C Aja]] period Steely Dan all the way,with this hilariously witty lyric comparing the new generation of women to Stepford Wife-like B-movie body snatchers. “Florida Room” is one of my favorites on this album full of them for me,a swinging uptempo jazz funk number with an extremely catchy melody and a sassy theme. The near 9 minute “On The Dunes” is a a beautiful jazzy ballad with some wonderful piano chords and a very reflective,if sometimes sad take on going up time and the river as it were.

The album ends with another great mixture of jazz and funk on “Teahouse On The Tracks”. In the end this is one of the finest albums to come out of the Steely Dan musical cannon. Donald Fagen was extremely lucky in that regard. His first two solo records,though released a decade apart were absolute musical triumphs. And both were tremendously successful as well. After being let down so massively by the pop culture changed in 1991-92 hearing “Tomorrows Girl” on new music pop stations was an absolute delight to these ears.

It would be under a decade when Steely Dan finally did re-emerge with a new album [[ASIN:B00004GOXS Two Against Nature]] and take home their first ever Grammy for album of the year. I am of the opinion that if pop music had gone for the type of approach that Steely Dan and people like them had,people could turn on the radio and be able to sing,hum and dance along to music happily that would give them something to think about in the end up. This is music that will make you dance along,hum along,feel happy,sad and creative all at the same time. So if I could thank Fagen himself for putting this kind of music out,I would without hesitation.

These two albums are now part of a trilogy of Donald Fagen albums. The final of them was released just over a decade ago and was called Morph The Cat. It came after two Steely Dan comebacks in the early aughts. And it reflected the transition to elder hood. It isn’t an album I have strong memories of so will have to revisit it in the future. But The Nightfly and Kamakiriad still stand to me as the most representative of Donald Fagen’s solo sound. With his most recent album Sunken Condos dealing with a whole new conceptual threat,we’ll just have to see where Fagen’s groove takes him next time.