Stevie Wonder’s ‘For Once In My Life’ Turns 50 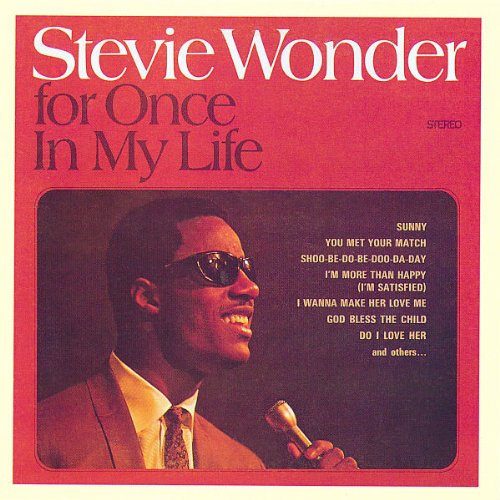 Stevie Wonder turned 18 in 1968. This was a year when months made a  difference in daily life. And for music too. Wonder was still deeply involved in Motown’s assembly line musical approach. But his albums were starting to reflect more of his creative input and vision by the late 60’s. And on this album, he made major leaps forward musically. The title track  is a strong example-a funky uptown soul stomp that was originally a Broadway show tune from Man Of La Mancha. Wonder kept the melodramatic vibe of the song intact on this title song too. And it was the radio breakout here obviously.

Yet its on the slower tempo, deeply grooving funk of “Shoo Be Doo Be Doo Da Day” and the powerfully composed faster funk of “You Met Your Match” and “I Wanna Make You Love Me”-as well as the slower,brooding “Don’t Know Why” where Wonder hauls forth his Clavinet electric piano. Herein begins his mapping out the basic pattern for what would be his 70’s breakthroughs-still within the fairly traditional Motown context. Some songs showcase that  sound of the time with an emphasis on Wonder’s burgeoning songwriting.

“I’m More Than Happy (I’m Satisfied)” is a superb example on the uptempo end of that. “I’d Be A Fool Right Now” is actually one of my favorites here with its creamy orchestrations and strong song craft-easily could’ve been a Top 5 pop single in that regard. “Ain’t No Lovin'” and the breezy “Do I Love Her” have the same effect. Two covers-in the rather Dusty Springfield style take on “Sunny” and the big band arrangement of “God Bless The Child” round out this album album with it’s strongly funky closer “The House On The Hill”.

For Once In My Life musically spoke more to Stevie Wonder’s future than his past. Eight of its twelve songs were either written or co-written by him. And in many ways, it caps off what my friend Henrique and I call his “childhood career”. Funk had arrived during 1967 with James Brown and Sly Stone. And that was the basis of Wonder’s music here-especially with the Clavinet. Its also an important realizing that the funk genre itself was a process. And in terms of Motown and Stevie Wonder’s own artistry, For Once In My Life marked his ongoing journey into the funk genre of music.