George Clinton: Computer Games & Some Of His Best Jokes 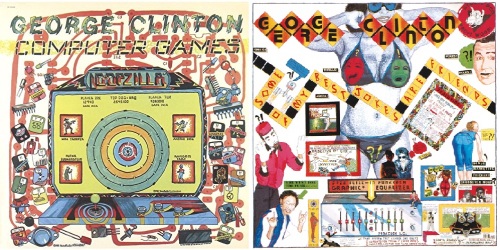 George Clinton,at age 74 is among the final two principle architects of funk left alive. The other being Sly Stone. It was through his music,among others,that inaugurated me into the wondrous world of musical funkiness when I was a teenager. And that’s probably true for many people within a decade or so of my age. Clinton was the major funk innovator for the baby boomer up through the millennial generation. After a decade of leading the mammoth P-Funk ensemble,George Clinton introduced his music in a solo context in 1982. Here are two reviews of his first and second solo albums-from 1982 and 1985.

During the first five years of me getting into P-Funk? Part of my ever continuing education on the subject was the understanding of internal connectivity. When most people think of George Clinton? Motherships and clones might come to mind. Somehow the term I associate with him is atomic. An atomic detonation comes from a chain reaction of split atoms.

Originally from one source but,when unleashed,create a powerful burst of energy. That describes P-Funk extremely well to me: the forces of it are many,and ALWAYS behind it’s musical might. So this is not Parliament,Funkadelic or even P-Funk All Stars we’re talking about here. This is George Clinton. Yet Bootsy,Junie,Gary Shider,Fred Wesley are all still here on this 1982 debut of the man now recording under his own name. And as always? He had a lot to say,in his own kind of way.

It begins with an electronic extension of “(Not Just) Knee Deep” basically. Than it goes directly into this stripped down,early hip-hop type pulse that lyrically references classic Motown to Sir Nose himself. “Pot Sharing Tots” combines reggae and jazzy electric piano for a very insinuating type of melody. The title song combines a scintillating rock solo on the choruses and a funkier rhythm guitar on the refrains.

At least three of these songs follow a conceptual thread of their own-seemingly about the hero’s journey of a player. Yet the concept of funk as a musically fissionable force is explored not only through the lyrics,but the music. Everything from bass,drums, guitar, keyboards and horns bubble up bigger perhaps than anything in P-Funk that came before. It was not only Clinton’s own debut. But the debut for the 80’s variant of P-Funk itself.

Some Of My Best Jokes Are Friends/1985

One of the things that I’ve learned over the years is the potency of P-Funk during the 1980’s. It was a musical organization that was still touring,still recording music and still maintaining a loyal fan base even when the societal odds were rather against what it stood for. And even with that? Some of the most challenging music from the band was being created during time time as well.

Difference was it was mainly being channeled through George Clinton albums where his personality was the central focus. But all the elements of the band were there. In this cast of musical characters we have future Living Color member Doug Wimbish and new wave/funk hit maker Thomas Dolby along for the ride. And it’s one that deserves to be taken more than once.

“Double Oh-Oh” is an electrified march extenuated by very Minneapolis style synthesized horns and female choir vocals. “Bullet Proof” is intense industrial funk-layer upon layer of bass synth combined with high pitched,laser like electronics and that Arabic type melody used in a lot of dance music of that era.

“Pleasures Of Exhaustion (Do It ‘Til You Drop)” is a long,extended jam with a jagged rhythm with both synthesized and electric slap bass accents-along with flutes. “Bodyguard” is a piano,drum and keyboard led dance/funk jam while “Bangladesh” is a slow,doo wop styled ballad. “Thrashin'”,featuring Dolby and the closing title song are both live bass//guitar and horn based P-Funk that only leaves in the contemporary drum machine for the electronic element.

Very much like it’s predecessor? This album ushered P-Funk into the fully electro funk edge. There’s no irony lost on me there since the band were even in their 70’s heyday pioneers of that sub-genre of funk-with Bernie Worrell’s “video game” style synthesizers. Conceptually this album is probably one of Clinton’s most important in the 80’s. It’s apparent that the Reagan era of SDI and the final days of the Cold War were proving fertile ground for his lyricism.

Again the metaphor of the atomic chain reaction is an important part of this album. But is used to make important points about how Clinton’s “pimping of the pleasure principle” prediction seemed to be coming true before his eyes. Yet both musically AND lyrically? He understood that black America had basic human feelings too. And were in the mind to demand another,better way to live. An album that’s a lot funkier and more significant in it’s day than one might think it to be.

Of course George Clinton’s solo debut Computer Games is now pretty much revered as a classic album. The reason why I included Some Of My Best Jokes Are Friends along with this album is that both of them represent an important transition in the focus of Clinton’s musical conception. On these albums,P-Funk met an electronic sound beyond even what it had already helped to bring to the funk genre. And of course George’s sociopolitical commentary never moved an inch either. So with Bernie Worrell now gone,we can only hope George is around long enough to give up just a little more funk.