Funk Revelations Of 1987: ‘Freedom’ by Santana 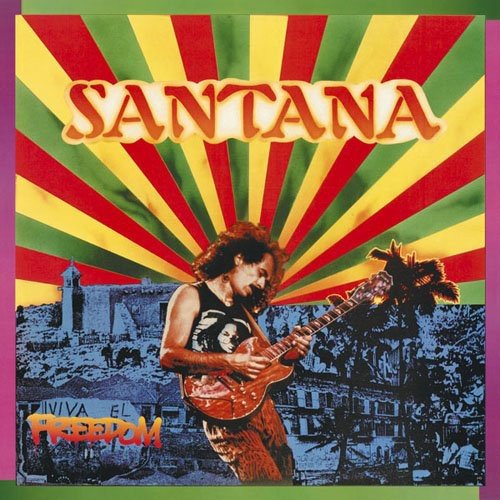 Considering the revivalist creative spirit of the 80’s, it was still surprising that a musician as innovative and distinctive as Carlos Santana was not only still around but had never went away. Signed to Columbia,his music kept reaching the people. And thereby producing an audience-especially when one of his fusions of the contemporary sounds of the given time period impacted strongly on them. All the same, the Mexican American spirituality and Carlos’s 60’s type idealism hadn’t left him either.

During 1987, with social movements such as the ones to end Apartheid in Africa and even the AIDS activism of Act Up were showcasing that positive social protest was alas not dead during the last years of Reaganomics. On this album Santana expanded the hybrid band he was going for to include both Genesis’s Chester Thompson and Graham Lear (himself a Gino Vannelli alumbi) as drummers,along with bringing back keyboardist Tom Coster and bassist Alphonso Johnson into the mix.

In addition to guesting blues icons Buddy Guy and Junior Wells, this album also marked the return of another Santana alumni in Buddy Miles-lead vocalist for this potent album.  “Veracruz” opens this album on the note much of it maintains: heavy duty uptempo danceable funk with Minneapolis style synthesizer riffs and some mean bass lines. With the harmonica solo of Junior Welles here its clear that,outside the instrumentation this song is also squarely in the 12 bar electric blues tradition.  Never a surprise in any funk but it really sticks out strong on this one.

“Once It’s Gotcha” is right in the same heavy funk vein. “Songs Of Freedom”, “Deeper,Dig Deeper”and “Praise” are all right there too. And on them Santana has re-introduced something that the best of funk is always wise to embrace: a strong humanitarian consciousness in the lyrics. “She Can’t Let Go” is a slower tune with a chill styled aura about the moaning electronics and the dynamically intense melody of the chorus. “Love Is You” is a very pretty instrumental-with a strong contemporary jazz/pop flavor with Coster’s glassy synthesizer playing the dreamy melody with Santana’s spirited soloing.

“Before We Go” has a deep gospel/soul flavor about it while “Mandella” is a deeply fluid African inspired instrumental jam that gets everyone on board instrumentally. The album rounds out with the break rhythm oriented and brooding dance/rock of “Victim Of Circumstance”. Two things characterize this album from start to finish. For one, every song on the album are strongly based in soul/funk and are very danceable. This doesn’t have the typical bed of percussion that you’ll find on most Santana albums. Its more integrated into the steady rhythms,which always stay firmly on the one.

Yet Freedom still holds onto the funk era ethnic identification that Santana always held. The production is just as contemporary as it had been on Santana’s previous album Beyond Appearances. Difference is a more live instrumental flavor is strongly showcased here. Another important element of this album is that it truly lives up to its title both lyrically and conceptually. The focus is squarely on both romantic love and the love that humanity has (and should have) for one another as well.  Santana are respected both by musicians musicians and as “classic rock” survivors.

That well rounded respect of Santana’s musical ethic is why I’d highly recommend this album. Both in lyrical and instrumental terms. And to anyone who thought the entirety of the 1980’s represented musical soullessness. Its an album of the band that I personally discovered long after it came it. But it still felt extremely familiar. True, Santana didn’t have the capability of ever being soulless as far as I’m concerned. And in a way, that is a big reason as to why this album can effectively serve as such a high example of what it is.

Anatomy of THE Groove: “Are You Ready” by The Isley Brothers & Santana

Erinie Isley said in a recent interview with Rolling Stone magazine  that he first crossed paths with the Carlos Santana at Columbia Records convention in the 70’s. He recalled Santana’s band “took all the oxygen out of the room” playing their hits such as “Black Magic Woman” from their Abraxas album. Both Santana and the Isleys. Both were innovating in the late 60’s-a time where Latin rhythms, psychedelic bass/guitar and soulful vocals were all coming together for a music that was both highly funkified and rocked out. It would not be until 2016 that a pairing of the two began to take shape.

My friend/blogging consultant was the one who informed me of the collaborative album Power Of Peace. Ron Isley’s sister in law Kimberley-Johnson Breaux, a member of Rod Stewart’s band when she made the introduction between the two,which resulted in a two song collaboration on the Santana IV album in 2015. For their newest project, they are covering a collection of 60’s era topical and spiritual “people music” songs originally from the likes of Willie Dixon, Marvin Gaye, Leon Thomas, Curtis Mayfield and Burt Bacharach. The first song is a version of the Chambers Brother’s “Are You Ready”.

Santana’s classic Afro-Latin percussion starts the song before the jazzy funk bass comes in-playing in a deeply melodic manner around all the polyrhythms. The drums soon come in play a classic two-on-three funk beat. After that Ron Isley’s lead vocals play call and response to a combination of Carlos’s clean guitar tone and Ernie’s heavily filtered psychedelic style. Both play off of each other in beautiful unison throughout the song over melodic backup singing. After a drum/percussion break with on the beat vocal grunts, the drums and guitars close out on a duel psychedelic rock guitar extravaganza.

“Are You Ready” showcases precisely what one might expect from an Isley Brothers and Santana collaboration-even half a century after their salad days. Carlos Santana and Ernie Isley are playing with each other at the top of their form-as if the two guitar icons have been playing together consistently for decades. The groove itself literally has everything message oriented “people funk” would ideally have: that percussive Afro Latin rhythm,the psychedelic solos along with the funky drum and bass line. And its a reminder of the musical daring that generations of musicians need to always remember.

Anatomy of THE Groove: “Tell Me Are You Tired” by Santana

Carlos Santana’s recording career has now spanned 46 years. From his upbringing in Mexico to being the band leader of Santana,his 69th birthday today is an excellent to point out one of the qualities that likely led to his longevity as a musician. One that’s not related to him having one of the most distinctive guitar tones of the last four decades. Like many jazz musicians,Santana’s music has evolved across a number of distinct periods. His percussion heavy Latin sound has remained intact for all of them. Yet the framework’s that sound settles into are always expanding with new developments in recorded music.

During the transition from the early to mid 1970’s,the Santana band itself was was going through one such transition. Starting out as major players on the Bay Area psychedelic rock scene in San Francisco,Carlos was doing more playing with musicians such as John McLaughlin and Alice Coltrane. His interest in jazz extended into funk,always an aspect of Santana’s sound too. This year marks the 40th anniversary of the bands album Amigos, which emphasized their new jazz funk sound most prominently. One such song of this style that keeps growing on me all the time is called “Tell me Are You Tired”.

A processed Fender Rhodes two note scale,separated by a cymbal crash,begin the song. David Brown’s bass then leads the congas and percussion along with the same two note Rhodes solo through the remainder of the refrain. The upcoming chorus has two parts. One contains a massively funky drum with an equally funky Clavinet solo. The second part is built around a lively Afro Brazilian rhythm and female choir vocals. After a second refrain and chorus,an increasingly intense improvisational Rhodes solo takes over the song even as the female choir vocal end of the refrain fades out the song.

Written by the songs drummer and Leon Ndugu Chancler and it’s keyboardist Tom Coster,this song really showcases Carlos Santana’s presence as a bandleader and inspiration more than a soloing instrumentalist.  Coster really takes off on this song-both on Fender Rhodes and Clavinet electric pianos accompanying Greg Walker’s lead vocals. Santana’s funkiness seems to come from him always favoring a highly collective style of instrumental band style. And the funk genre made that ethic it’s strongest emphasis. And this unsung album cut is a shining light for Santana’s funkier grooves.

Anatomy of THE Groove: “This Is This” by Weather Report

Joe Zawinul had a tremendous history in the development of hard bop jazz onto jazz fusion. He immigrated to the US from Austria in 1959. A year later he was part of Cannonball Adderley’s quintet. And he wound up being the composer of Cannonball’s best known song “Mercy Mercy Mercy”. By the late 60’s,Zawinul was playing and writing with Miles Davis on his fusion process album In A Silent Way. When he and another fellow Miles alumni Wayne Shorter formed Weather Report two years later,Zawinul was again pioneering jazz instrumentation into the era of synthesizers.

Between 1971 and 1984,Weather Report recorded 14 albums. Many of them were iconic in the annals of the fusion genre. The band was also well known for developing pioneering bass players. This included Miroslav Vitous,Alphonso Johnson and best known of all the late Jaco Pastorious. The bands final album in 1986 came totally by accident. They thought they’d fulfilled their Columbia contract with their previous album in 1985’s Sportin’ Life. This didn’t end up being the case,so they had to make one more album. And Zawinul really made it one for the road with the title song to their final album called “This Is This”.

Mino Cinelu starts off with some fast paced Afro-Latin  percussion mixed up high. Peter Erksine plays a steady,marching groove that fits like a glove into the spaces left in Cinelu’s percussion. Zawinul and new bassist Victor Bailey rolled right along upfront with one of Zawinul’s most melodically hummable synth bass lines. He provides two for this song-the other a deeper 8-note one later on. Carlos Santana also provides two different guitar parts here-one is high pitched,cosmic guitar atmospherics and some of his exciting lead soloing as well playing call and response to Zawinul’s synth bass lead..

Santana actually get’s accompanied by Zawinul providing two synth brass lines-the first orchestrated big band style ones. This part comes into play after the first few choruses. On the last few choruses of the song, the other synth brass part arrives playing more succinct,funkier charts. By this time Santana’s guitar,Cinelu’s percussion,Erksine’s drums and Zawinul’s synth bass all come together in a beautiful,rhythmic unison of colorful sounds. Little by little,each instrumental element drops out of the mix. And the song slows back into percussion,bass and guitar as it fades.

Before people like Billy Preston and of course Prince,Joe Zawinul was a major pioneer of the bass synthesizers. By 1986,synth brass was the big thing in American pop music with the advent of the Minneapolis sound. With Zawinul having worked it for years,”This Is This” is a highly underrated song for Weather Report-perhaps one of Zawinul’s strongest compositions. The groove is strongly Afrocentric,and the playing is as funky as they come. It really brings out the best in ever instrumentalist involved and allowed Weather Report to go out again innovating with some electro funk style world fusion.