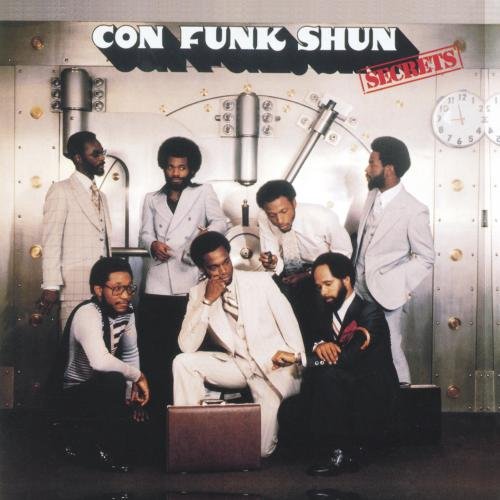 Con Funk Shun (since they’ve recently reunited) remain a band with a strong personal connection to both me and friend/co-founder of Andresmusictalk Henrique Hopkins. For Henrique,it was a being childhood friends with Dameion Harrell-son of the bands sax player/flutist Paul Harrell. For me,the personal connection came from their 1979 jam “Chase Me” being part of that often discussed first long form exposure to funk via the compilation The Best Of The Funk Essentials. Somehow or other,the bands sound (along with Earth Wind & Fire) became a strong criteria for 70’s funk in my listening tastes.

Their 1977 album Secrets,which celebrated its 40th anniversary on March 25th, was reissued on CD during the mid 90’s funk reissue boom. I found it at the local Borders Books & Music. They’d let you listen to CD’s in a player behind the counter-since they had equipment to reseal opened media at the time. Having just learned that this had been the bands second album,hearing it really went against the film/music/literature cliche of the sophomore slump. All nine of the songs on this album were consistently excellent. And that was heavily reflected in my Amazon.com review of the album.

On their sophomore release these Vallejo California natives actually sharpen up a good deal of the harder edged elements of their sound found on 1976’s Con Funk Shun and develop something of a new flavor to their sound. Seen by many people who,as I was at first familiar with the band through compilations as something of a fully west coast answer to EWF.

Now that has some truth to it and not too. While bandleader Felton Pilate and Michael Cooper have similar vocal exchanges to Maurice White/Phillip Bailey and their harmony based,melodic groove sounds do have a passing similarity Con Funk Shun don’t concentrate as much of their concepts as they do instrumental exchanges and songwriting. And this particular album features endless examples of their new style.

Despite the hard driving nature of the hit “Ffun” and “ConFunkShunIzeYa” these two horn heavy grooves are by no means indicative of the entire album as a whole “DoWhaChaWannaDo”,with it’s elegent mix of melodic arrangements,on time rhythm and strong craft showcases this as music that stands directly in between th earlier,classic “united funk” and the pre disco sophistifunk style.

This also shows up on the smoother,more midtempo grooves of “Who has The Time” and the title cut,both powered by wah wah’s,heavily reverbed rhythm guitars and sultry harmonies. The outright ballads “Tear In My Eye” and “I’ll Set You Out OK” have all the sitar/orchestration effects of classic Northern soul with all the melody intact. “Indian Summer Love”,an uptempo instrumental showcasing the jazzier end of the bands sound has a George Benson/Wes Montgomery/Bobby Broom style guitar exchange between Michael and Felton that is pure icing on the cake.

Honestly have purchased this during the time I was really thoroughly exploring the funk genre I’d recommend this and other albums like it to those people who think they don’t like funk or find it “annoying”,an all too common phrase I hear sadly. It’s melodic enough to show how wonderful music in the groove can be. Also the instrumental ability of the band is more than strong enough to make this great for more serious listening as well.

Always mildly ignored and under praised when compared to some of their contemporaries with more name recognition (The Commodores,Ohio Players, Kool & The Gang and The Bar Kays come to mind), Con Funk Shun had a definite niche carved out as among the smoother of them all. But smooth FUNK,not just smooth grooves and that’s important to distinguish. So one will likely just put this on and take the ride with them because it will be a happy surprise for anyone pretty much.

Con Funk Shun’s Secrets album was part of a huge array of funk classics that came out in 1977. To use writer Rickey Vincent’s terminology, albums of this kind stood as a transitional one between the early/mid 70’s “united funk” era and the later 70’s “dance funk” one. It was definitely a melodic album that was extremely catchy and singable. At the same time the combinations of rhythms,horns,synthesizers and bass/guitar interaction really typified the junction right between these two eras of funk music’s development. That makes Secrets one of the most important funk albums of its era.

Anatomy of THE Groove: “DooWhatChaWannaDoo” by Con Funk Shun

Con Funk Shun are among my favorite funk bands of the 70’s. Originally hailing from Vallejo,California,this band is someone whom my friend and blogging inspiration Henrique Hopkins has a good deal of musical knowledge of. Based on what I heard beforehand, Con Funk Shun were a band with many similarities to Earth,Wind & Fire. They favored well recorded grooves with strong melodies. They also often enlisted the writing/instrumental assistance of Skip Scarborough. Band founder Felton Pilate went into fame on his own by producing MC Hammer on his debut album in 1988.

This band first came to my attention via my dad’s cassette copy of the Best Of Funk Essentials  compilation around 1993. Later on while browsing the cutout CD’s at Borders Books & Music,I came across a reissue of the bands 1977 sophomore album Secrets. At the time,Borders had a CD player behind the counter. And opened CD’s for customers to listen to before purchase. If they didn’t want them after,they’d reseal them. This particular CD was not one I asked them to reseal. And a big part of this was due to the fact the first song really jumped out at me. Its called “DooWhatChaWannaDoo”.

A fast snare drum kick starts out the song. After that,the drum takes on a mild Brazilian flavor-accenting a faster three hit drum on the second beat. Scarborough builds both a high pitched melodic synthesizer and an elaborate Moog bass into the mix as well. The bands horn charts play the main melody of the song-accented by climactic strings. The refrains emphasize the bluesiest aspects of the keyboard parts-while intro represents the chorus. The bridge takes it all down to a chunky high/bass synth duet with accenting strings before the chorus repeats up to the fade out of the song.

“DooWhatChaWannaDoo” is one of those songs that represents the sophistifunk sound at some of its very finest. The keyboards and horns both have an equally thick,gurgling throb about them. And it all manages to accent the very singable (and also elaborate melody) as well. Its a great example of starting off an album with one of its strongest songs that could draw in the listener to its melody and groove. Con Funk Shun ably blend a harder edged Dayton style hard funk vocal and rhythm attitude with the slickness of their West Coast funk contemporaries. And it makes this song a shining example of their funk.

A major learning experience for me has come from writing this blog. And it’s that sometimes? Focusing on a single song can be very musically instructive. That’s especially true for an album listener. Of course? This all boils down to a matter of personal taste. An album might have a lot of a particular style of music that once doesn’t like,and very little of a style one does like. And that is a particularly important factor of the song I’m going to be talking about today. And it comes from famous West Coast funk veterans out of Vallejo.

One of the biggest surprises this year was that Con Funk Shun made a big album comeback. Michael Cooper and Felton Pilate reunited the band with the production team behind Charlie Wilson’s recent solo albums after a tour. And released the album More Than Love on the Shanachie label at the end of this past April. After previewing the album? I find the album far too contemporary soul ballad heavy for my personal liking. Still, among the few uptempo songs present on the album? One song stood out for me personally. And that was “Once I Get In”.

The song starts with a straight up amplified blues guitar riff before going into a thick,jazzy chorded funk groove. This is fed into a series of orchestral synthesizers,organ with thick slap bass accents. The choruses of the song are a call and response series of expansive multi tracked vocal harmonies singing along with the leads. These vocals and the stomping instrumental refrain lead each other through a couple of building choruses. Towards the end of the song? The horn and rhythm guitar accents back up an entire alternate vocal chorus before the song fads out.

On this song? Con Funk Shun function in a similar manner as they did in their musical heyday. The rhythm section including the bass,guitar and drums function to elevate the choruses,melody and more vocal oriented elements of the song. But do so in the funkiest possible way by keeping the groove phat and fluid. This song is a much slower and more direct funk stomp than the more uptempo,EWF like post disco style they are more famous for. While the vocals themselves and the rhythms aren’t quite as imaginative as they would’ve been in the late 70’/early 80’s? On this one song along? It’s a joy to hear Con Funk Shun spend 3 minutes back in the groove.