Daryl Hall & John Oates have been part of the soundtrack to the lives of millions of pop music lovers of the early/mid 1980’s. These Philly natives had a handful of smash singles in the mid to late 70’s. And unlike many white artists doing soul/funk they (in a similar manner to Boz Scaggs and The Rolling Stones),they innovated and embraced the side of the genre that was contemporary at the time. When they began producing their own records starting with 1980’s Voices,they soon found themselves the most commercially (and in my opinion,creative) American duo of the 80’s decade.

Personally I had the pleasure of seeing Daryl and John perform live at the Darlings Waterfront Pavilion in Bangor,Maine this past summer. It amazed my ears to not only hear them abstract on their classic hit songs in a very instrumental way,but how positively the audiences responded to them. One of these hits reminded me of the very first pop song I remembering hearing-likely at around 3 years old at the Bangor Mall. Over the years,its become of those songs that defines my listening tastes for its melodic and solid musicality. The name of the 1981 song is “I Can’t Go That (No Can Do)”.

Daryl Hall’s Roland CR-78 drum machine,reverbed by echo on each beat,begins the songs soloing before John Siegler’s upfront,8 note bass line chimes right in. Than Hall’s glistening,high pitched synthesizer comes in. That along with John Oates chunky rhythm guitar and another counter keyboard from Hall. That countering keyboard duets with Hall’s vocals-even on the chorus when he and Oates are harmonizing on the choruses. Charles DeChant takes a beautiful sax solo on the bridge that’s heavy on melodic sustain. All before Daryl and John riff on the chorus until the song fades out.

This is probably my very favorite Hall & Oates hit from their early 80’s run. It has all the hallmarks I love about them. The emphasis on the heavy drum machine rhythm/bass interaction,the choral modulations and harmonic complexity and still providing the capacity for the listeners to tap their foot and sing along to it. Its prime #1 funk for 1981. So much so that it inspired Michael Jackson while making his blockbuster album Thriller‘s hit “Billie Jean”. Its one of those great examples of how putting energy into the musical aspects of a song,not just the performance,that makes a huge hit funky and eternal. 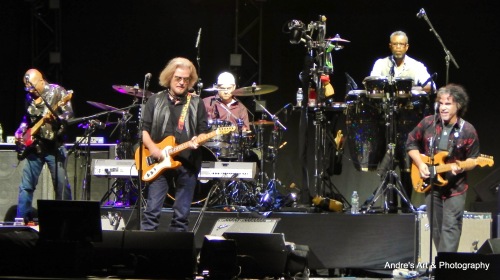 Daryl Hall and John Oates provided me with the first pop song I remember hearing in “I Can’t Go For That”. Since their music shaped what I listen for on the radio,it was extremely exciting that these now Rock ‘N Roll Hall Of Famers decided to make a tour stop at Darling’s Waterfront Pavilion,Bangor Maine’s major outdoor concert venue. Attending a Hall & Oates concert with great seats and a price would be amazing in and of itself. But in 2016 they are touring with two of other musical acts that are among the funkiest people at this time: Troy “Trombone Shorty” Andrews and Sharon Jones & The Dap Kings. 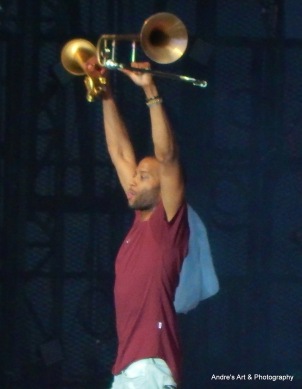 Trombone Shorty was the first act in the set. He and his band were amazing showmen. Especially in Andrew’s facility with both the trombone and cornet. 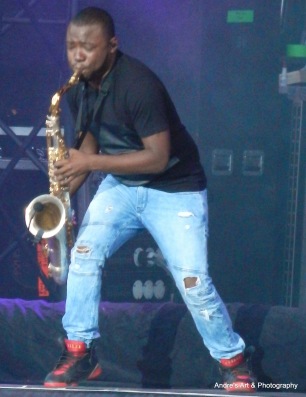 The interplay between Andrew’s and his two sax players was incredible. And one of them provided some amazing solos as well. 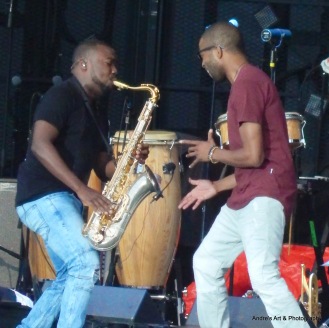 Andrew’s conducted his band in the classic jazz/soul tradition of using his body and dancing as a human baton. This really added to the entire showmanship of his show. 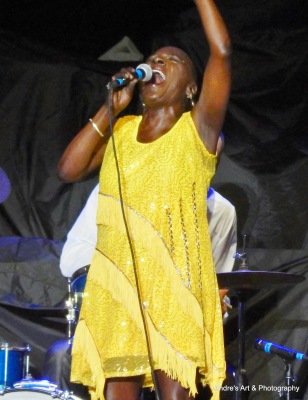 Sharon Jones is a true soul survivor. Her entire performance was based around her still being treated for the cancer that nearly took her life several years ago. Her powerful Tina Turner like vocals and fast,joyous physical moves and dances (plus her bright yellow dress) lit up the stage brighter than the sun that had finally set when she began performing. 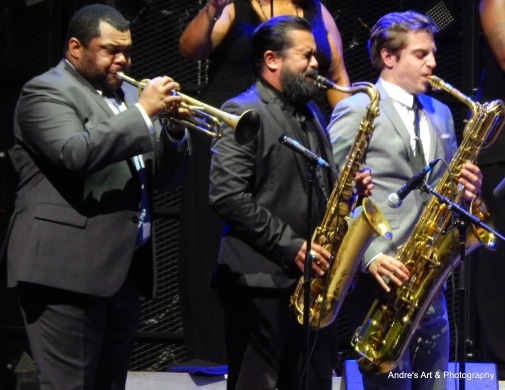 The Dap Kings come to LIFE when their horn section are blowing,especially when seen on the stage when your hearing them in person. 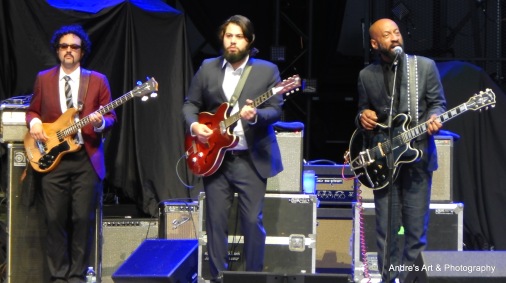 Of course,no funk band is quite complete with it’s bass/guitar interplay. And the Dap Kings always have that covered! 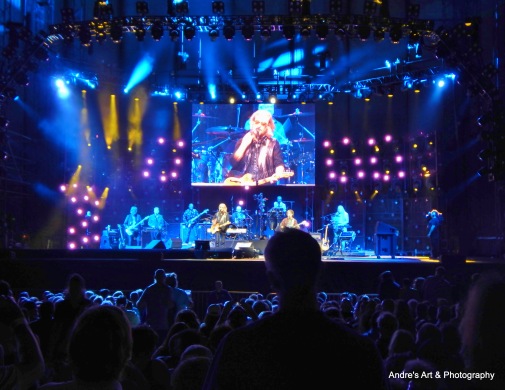 Hall & Oates game out to an excited house dancing and singing along. One thing the duo and their amazing onstage band did is present their classic 70’s and 80’s hit songs in new and unique ways. But the people attending the show still loved listening to them. 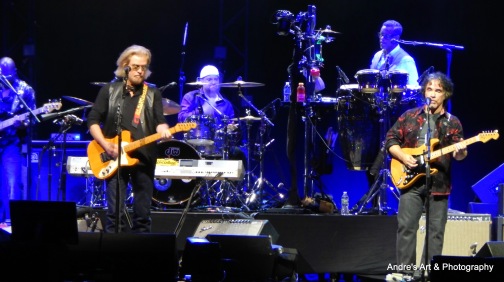 Daryl & John seem to have been in different areas of Maine before,especially with Daryl restoring an house in Kittery Point. The duo’s interplay with each other flowed so smoothly-in the way that musicians who’ve played together professionally for over 45 years tends to do. When it began to rain,Daryl kept the audience into the show by saying “It’s raining,but your tough in Maine right?” 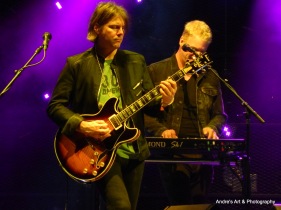 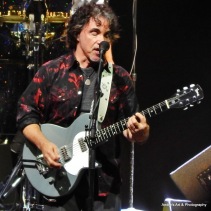 John Oates and the band’s second guitarist really rocked out on solos and lead lines throughout the show-especially between the songs hooks. 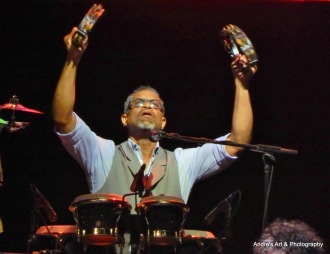 One of the very first things I remembered observing about Hall & Oates was the amazing bands they had throughout their career. Between the bassist,drummer/percussionist and a sax player who was almost as much a star of the show as Daryl and John,their musicality shined brightly as a unit as well as with their amazing songs-among them a jazzy funk live instrumental take of “I Can’t Go For That” which went on for over 8 minutes.

Because the audience was applauding so hard when their names were announced,I never did quite hear the names of Hall & Oates terrific band members. But everyone from that band,Sharon Jones and the Dap Kings and Trombone Shorty were amazing! It is the very first funk/soul revue show I’ve ever seen live in my own hometown. And being able to experience the music,sing it and photograph it is something I will never forget for the rest of my life.

Anatomy of THE Groove: “Phunk Shui” by John Oates

Hall & Oates indirectly propagated the first music I remember hearing while in public with their hit “I Can’t Go For That”. John Oates is turning 68 today. He recorded his first single the same year he enrolled at Temple University,where of course he met Daryl Hall. And as for them as a duo,the rest is history. Throughout their decade and a half career peak of being the most commercially successful American duo in rock history,Oates generally only had one or two songs on each of their albums that he sung lead on. While Daryl Hall began a solo career in the mid 1980’s,it would take Oates another 16 years to release his very first solo album,which he entitled Phunk Shui.

Around the time I picked up this album,there was a lot of talk within my family about the Chinese philosophy of Feng Shui. This basically reduces down to harmonizing everyone with their surrounding environment. In that case,it had to do with the structural orientation of doors in our townhouse apartment closing directly onto each other. But seeing the title associated on this John Oates album with the funk music genre,before even hearing the album,reminded me of how much of an effect the energy created by this rhythm based music had on my own spacial orientation. When I finally heard the title song of John Oates album,the whole idea that the title projected completely clicked.

A heavily processed Clavinet sounding keyboard opens the song,before the hit hat kicks in the groove starts right up. The James Brown style rhythm guitar gets going heavy on the refrain. The melody changes up just before the chorus with the organ mixed high while the keyboard sound that opens the song opens up for the choral refrain. Oates sings the song in both the middle,high and bass end of his vocal change. On the bridge of the song,the organ references the descending opening electric sitar of Stevie Wonder’s “Signed,Sealed And Delivered” before going into a rock guitar solo from Oates. This solo continues onward as the chorus repeats to the songs fade.

Considering that live band funk was few and far between from the late 90’s through the 2000’s,this song was a tremendous revelation. It also showcases how important funk was to the success that Hall & Oates had during their late 70’s and early 80’s peak. Songs such as the aforementioned “I Can’t Go For That” and “Method Of Modern Love” both showcase that influence. He mentions P-Funk,Ohio Players,Gap Band and Morris Day as making a huge impact on his sound. Along the way he even brings out how so many contemporary pop acts have neglected funky musicianship just to make money. And that now that “things have gone wrong”,the time has come to relight the funky fire.