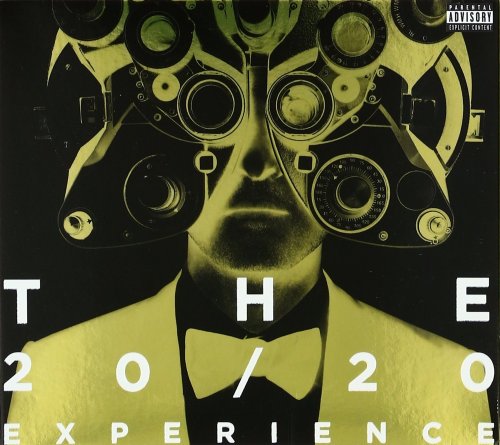 Eight years ago Justin Timberlake released his second studio album FutureSex / LoveSounds,an album very much defined by uptempo funk and EDM musical ideas and hybrids. The grooves were emphasized over the vocals a lot of the times, and it was quite a creative departure from his debut. In the time since that release Justin Timberlake has taken time to star in feature films and,for awhile seemed to be joining the ranks of Elvis Presley and Whitney Houston who traded in their musical banner for shots at the silver screen. But not only did his theatrical roles turn out to be a big success, but they seemed to have inspired him creatively as well.

During mid summer my friend Henrique informed me that Justin Timberlake’s The 20/20 Experience would be followed up by the end of September by a second volume. Seems Timberlake has recorded easily enough usable material in the last seven years for a double album. But probably knowing the economy level of most music buyers he elected to release it in two parts,also releasing the two full albums as the double set it was intended for those who haven’t gotten the first part yet.

For one thing,the idea that a contemporary recording artist to think creatively in terms of double albums (or albums period) is a profound revelation. Of course it helped that the first volume on this focused primarily on a genre one could call AOS/AOF (album oriented soul and/or funk) that hearkened back to the prime of the 70’s funk era. Of course I was eagerly anticipating this album. Of course I steered clear of streaming as I wanted to allow this album to speak for itself as I listened. From what came through that was a very good idea.

Most popularly inclined music artists today have gone backwards to a degree to emphasizing single songs again. Mainly,as with the 45 RPM record half a century ago, that format is more in tune with the age of internet based formats such as YouTube and MP3’s. Not only is Timberlake a fan of dressing and grooming himself in a sharp,elegant manner but his time in film probably exposed him more to the medium’s dynamic way of presenting its vision. So since Timberlake bought “sexy” back last time out,he is now bringing the musical quality of the album format back in a similar fashion.

The album opens with the upbeat melody and stop and start groove of “Pusher Love Girl”,with Timberlake’s sensuously subtle vocal approaching wrapping around the hiccuping rhythms as he compares a strong relationship to an addiction. Hearing it here I’ve warmed up heavily to “Suit & Tie”,a percussively rhythmic funk piece where Jay Z’s rap is perfectly in tune with the musical setting and never intrudes on Timberlake’s melodic vocal harmonies. “Don’t Hold The Wall” blends a slower 2-step dance groove with a trance music-type harmonic atmosphere,complete with East Indian singing and flutes. “Strawberry Bubblegum” is one of my favorite songs here. It begins with a lightly pulsing,spare electro funk and builds in it’s last three minutes into a afrolatin dance/funk/percussive jam.

The enormous rhythmic dynamics of “Tunnel Vision” and the slower “Spaceship Coupe” but more of the emphasis on Timberlake’s songwriting and vocals again-as he vocally harmonizes with himself Marvin Gaye side to express both the romantic and carnal side of his personality in these songs. “That Girl” is a sweetly melodic neo soul type number-led by a fantastic jazzy guitar riff that again places the focus on his singing and melodicism. “Let The Groove In” is just amazing-a hyper kinetic funk era style jam that is heavy on a genuine African percussion/tribal dance rhythm.

“Mirrors” is a very potent mixture of modern soul and progressive pop/rock that grows stronger in tone as the song progresses-especially in terms of its melodic development. The final song “Blue Ocean Floor”-with it’s spare trance/electronica sound and backwards loops takes the overall approach of this entire album to its most basic level. “Gimme What I Don’t Know (I Want)”,”True Blood” and “Murder” are driving,rhythmically thick funk of the highest order. Justin jams on the one throughout all of these-intersecting the related grooves of James Brown,Michael Jackson and Prince through his own distinctive vocals,beat boxing and sexually eccentric lyrical orientation.

His slyness,wit and assertions to freedom of expression permeate all of these. While both very well composed and rhythmically complex the 2-step hip-hop/dance styles of “Cabaret” and “TKO” are probably my least favorite here. Yet the fact they are not stereotypically overproduced does give them extra vitality and groove. “Take Back The Night” is a beautiful dance/funk odyssey-almost a follow up to “Rock Your Body” from Justified only with a fuller production. Its easily my favorite here,and one of my favorite Timberlake songs of all time. “Drink You Away” is a grinding,rocking and funky blues type number-with Timberlake supplying some grooving guitar work of his own.

And what is the overall approach of this album exactly? In a modern production concept from Justin and Timbaland,who produced the previous album, Justin Timberlake has managed to bring out a re-visitation of the cinematic psychedelic soul/funk/pop-rock sound that permeated music by Isaac Hayes and much of the Norman Whitfield era Temptations. The songs here are generally seven + minutes and therefore have enough space to develop instrumentally and vocally. But as opposed to relying on a backup vocalists and enormous orchestral instrumental passages with no vocals, Timberlake’s own talents in singing/songwriting are integrally linked to the conceptually dynamic instrumental approach this album takes.

And the mixture of tradition string and horn arrangements with modern day EDM/hip-hop electronics give this album the possibility of being the commercial fruition of how music in the last three or four years has began to grow out of the unsettling complacency its been in since the turn of the millennium. Considering this albums already strong commercial success, if an approach to music like this catches on in the coming years, the funk/soul album innovations of the century might reach their commercial golden age.

Links to the original reviews for both albums below: