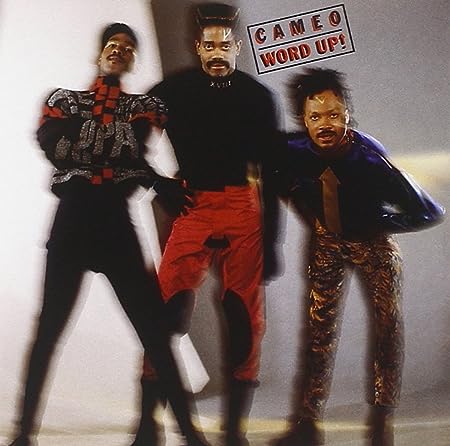 Cameo and “Word Up” (as a song) in general have been a consistent point of discussion between myself and Henrique Hopkins over the years. At this point,my primary outlet for writing about music was through Amazon.com’s customer reviews. For a number of reasons,my forum or music based writing became based more around my WordPress blogs such as Andresmusictalk. So much of my opinion went into my currently unpublished Amazon.com review of the Word Up album itself. So over three months after its 30th anniversary,here’s my personal take on Cameo’s major funk crossover album from 1986.

Truth be told? This album probably represented the very first funk by a contemporary artist I ever heard. Keep in mind it was when it came out. And at the time I had no idea what a musical genre (let alone funk) even was. The music of Cameo has always had a strong attraction to me ever since-likely due to that core musical memory. Historically for Cameo,this was an interesting time. Starting with 1984’s She’s Strange,Cameo pared down to a trio of three members in bandleader/founder Larry Blackmon on lead vocals and bass with Nathan Leftenant and Tomi Jenkins as vocalists.

Charlie Singleton left the band functionally to start a solo career. Yet the deepest thing about that was that Charlie,along with other members of the band,didn’t leave completely. He,along with session musicians such as the Brecker brothers remained behind on this album which,as it were wound up being their iconic breakthrough album commercially-at least as far as pop char success was concerned.

The title song and “Candy” are of course the signature mid 80’s Cameo sound-stripped down funk sound,slap bass the texture of thick liquid. Another element that makes them stand out is the strong percussion breaks and Michael Brecker’s sax solo on “Candy”-making for one of the strongest rhythmic patterns of mid 80’s hard funk. “Back And Forth” is a straighter dance/funk groove that’s highly catchy and melodic. It seems like a naked funk number,but the arrangement is filled with layers of dreamy synthesizers as well.

It was a full sound creeping up from behind rather than immediately out front. “She’s Mind” is the one slow jam here-really more mid tempo boogie with an appropriately jazzy pop sense of song craft showcasing what terrific songwriters Cameo were. “She’s Mine”,a drum beat oriented hip-hop/funk hybrid as well as the furious live band oriented funk of “Fast,Fierce & Funny” and “You Can Have The World” are all brightly composed and heavily rhythmic grooves-all focusing on the theme of materialistically demanding women that was a mainstay for Cameo throughout the years.

Many “jam fans” who have an intense dislike for the music of the first half of the 1980’s refer to the period in which this album came out as a rebirth of the funk. As soon as James Brown hit the airwaves with “Living In America”,music that was strongly linked with classic funk began to be innovated on. That also found itself spreading into the next generation of hip-hop as well-especially as the functional original funk bands who didn’t have the commercial success of Cameo abandoned the idea of radio play and musical commerce.

So the “nu funk” as it were,and the generation of hip-hop that both inspired it and was inspired by it was all part of the culture from which this album came. It would seem looking back that no one was particularly self conscious about this burst of funk creativity. It seemed to be a degree of life breathed into the “number one funk” aestetic of the 60’s and 70’s-where music that celebrated advanced rhythmic ideas and lyrical wit in a contemporary context could flourish. This album is one of the many that really captures that spirit. And reminds any cynic who thinks that funk is dead that,when it seems to begone,it can survive and (in cases such as this) be enormously successful as well.

One of the ideas I had that sprang up from writing this review was about the type of funk that is becoming successful today. Songs such as “Uptown Funk” (the “Word Up” of 2014/2015 in terms of commercial success in many ways) are generally inspired by the synth based style of 80’s funk. Word Up,as both a song and an album,was a whole other thing though. The slap bass and the slow,hard hitting beats that are seldom heard in modern funk really define this album through and through. Still,it not only represents a major crossover triumph for Cameo but hard funk in the 1980’s in general.

Anatomy of THE Groove: “Crosswind” by Billy Cobham

William Emanuel “Billy” Cobham shared the same Panamanian heritage with members of the 70’s Latin-funk band Mandrill. After his family moved to New York and playing drums throughout childhood,Cobham attended the New York High School For Music And Art-after which he had a brief time in the army where he played in their band. Upon discharge, he played in Horace Silver’s band-in addition to doing sessions with Stanley Turrentine, Shirley Scott and George Benson. He was part of the original lineup of John McLaughlin’s Mahavishnu Orchestra in the early 1970’s before branching out into a solo career.

His solo debut Spectrum was released in 1973 while he was still in the Mahavishnu Orchestra-with band mate Jan Hammer helping out on keyboards. This album is considered a fusion classic. Though it’s funkiness comes mainly as bridges amidst elongated,speedy hard rock rhythms with elaborate improvisations. His sophomore album Crosswinds got far deeper inside the groove-especially with folks like George Duke and the Brecker brothers aboard. And it’s the closing title song that makes that point best.

Cobham set’s the groove up with a slow,funky drum with Lee Pastora providing some thick percussion accents. George Duke lays down a strong bluesy groove of his own with a loud,fuzzed out Fender Rhodes while John Williams brings in an excellent foundational bass line. The Brecker’s and trombonist Garnett Brown provide some accenting,melodic horn charts. John Abercrombie,who worked with Cobham for years,provides some brittle,scintillating hard rock guitar solos until the rhythm section and the horn section brings the entire groove to an abrupt halt.

This song is a fantastic rocking funk-played by some talented jazz players who KNEW how to play funk and do some heavy rock soloing. Though the instrumentation is quite a lot more sleek and tight on this song,the shuffling drum/percussion part and slow,bluesy melody has a similar flavor to Funkadelic’s song “Nappy Dugout” from the same general time period. It really showcases how high the then fairly new funk sound was effecting the most technically inclined of jazz/rock fusion players at the same time that genre was beginning to enter it’s own peak period of musical excellence.

Anatomy Of THE Groove For The Brothers And Sisters Who Aren’t Here: “East River” by The Brecker Brothers

The late saxophonist Michael Brecker and his older,trumpet playing brother Randy were major session fixtures in the mid/late 1970’s. They would go on to have a 30 year long career both together and apart,with Michael often being touted as the most influential jazz sax player since John Coltrane.It was through George Clinton’s P-Funk that the Brecker’s  entered the Library Of Congress’s National Recording Registry in 2011. That’s because Parliament’s 1975 album Mothership Connection was added to that registry. Funk officially became notarized in the capital in Chocolate City itself that day. And even so,the Brecker’s contributions didn’t end there.

Between 1975 and 1977,the Brecker’s released three studio albums as a duo. These albums were very heavy with funk. Not to even mention the horn blowing pair maintained their session work with P-Funk. They played with the JB’s own Fred Wesley and Maceo Parker on two albums by the Horny Horns. And through them they participated in albums by Bootsy’s Rubber Band as well. In 1978 they released a live album entitled Heavy Metal Be-Bop. The album showcased the brothers usage of Eddie Harris inspired electric sax and trumpet. It also contained a brand new studio track with additional personal that was entitled “East River”.

A thundering drum solo and discordant horn fanfare opens the song. A thudding,slow tempo funky drummer and a round,popping drum-like bass from Neil Jason.Barry Finnerty adds a thick layer of amp’d up rock guitar to the vocal changing and Michael’s bop style sax solos. The song breaks right down to an ultra funky mix of clanging percussion,hand claps,Dyno-My-Piano Fender Rhodes,rhythm guitar,horns and Jason’s lead vocals. This stomping refrain returns after an additional repeat of the chorus. That main chorus of the song basically repeats itself throughout the rest of the song-allowing Michael Brecker to take a solo bridge along with the lead guitar before fading out.

In addition to being a strongly P-Funk inspired jam,this song is a sonically impressive example of hard rocking funk at it’s most fiery. Barry Finnerty’s guitar solo rocks hard indeed. But as with the rest of the music here,it’s a total rhythmic element. It’s the horns,both as a collective and solo element,that are truly the instrumental voice of this groove out front. The high recording quality,with everything about the rhythm popping out with amazing clarity,has a punchy live sound. It showcases just how far P-Funk’s instrumental reach was by 1978. And how much musicians like Michael Brecker played in the evolution of the uncut groove itself.