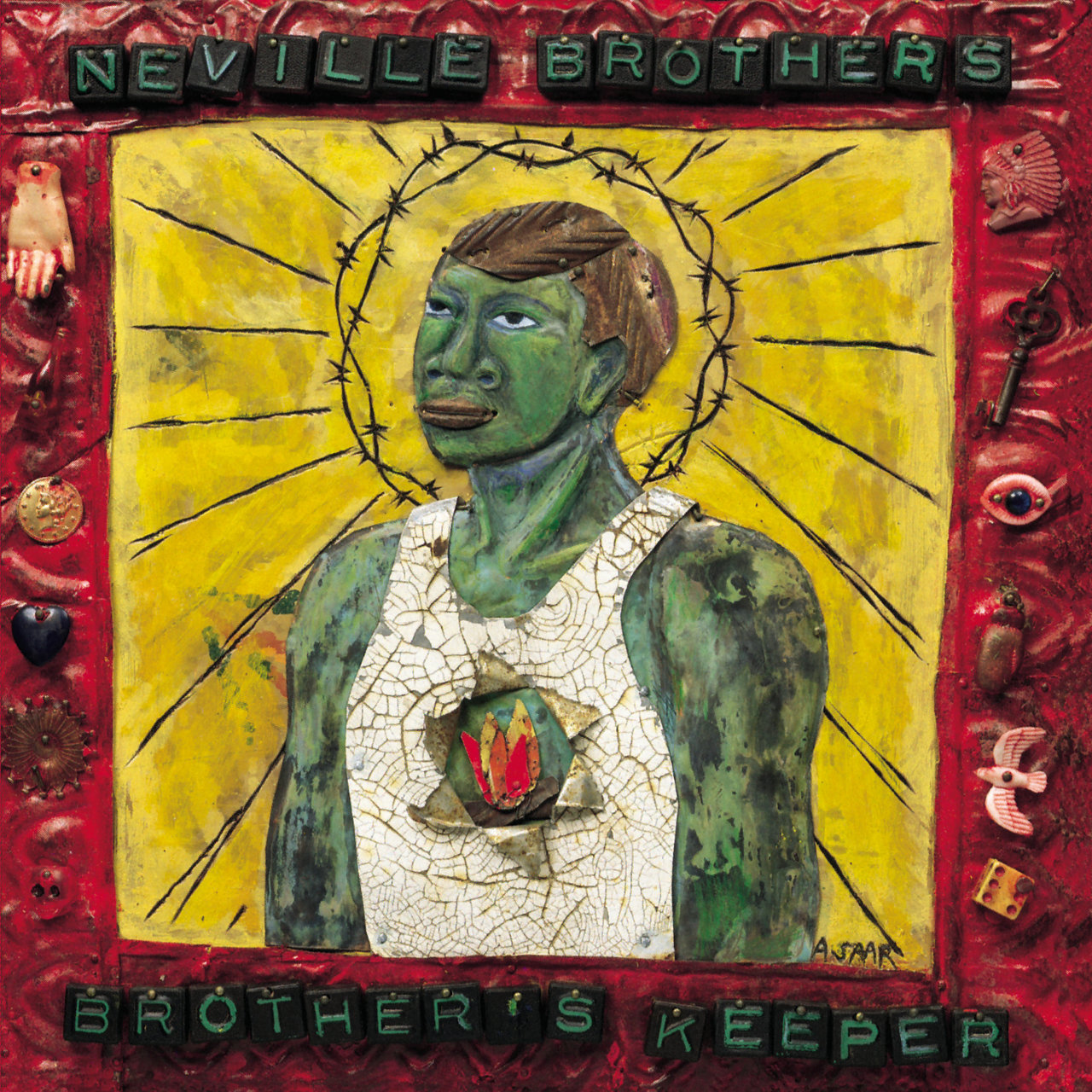 The Neville Brothers were a semi regular presence in my musical life to such an extent? They almost worked their way into the aestetic back round of that life. That was until I started exploring their music 5-6 years ago. And found that, in terms of music that came out following the 1980’s, the Brother’s Keeper is quite different from what I could possibly have imagined. Known about this for a long time. Picked it up same day,same format and same price as I did the Neville’s Fiyo on the Bayou. Decided as I often do to listen to the two together.

I expected both albums to be excellent and interesting. And that they both are. But there’s something on this particular album that is somewhat hard to put into words. It’s a sort of flavor you get from that type of 1970’s funk that stretched conceptually out beyond merely the latest dance or whatever. In terms of cultural,moral and spiritual understanding this album makes no apologies in showcasing the Neville’s outlook on all of that both lyrically and musically all at once. It’s nothing like their late 70’s,early 80’s sound at all. They evolved into something quite different.

A  good deal of these songs (in fact)  have a strong blues/country-soul vibe to them from “Steer Me Right”, the Linda Ronstadt duet of “Fearless”, “Fallin’ Rain” and “Witness” actually have more a potent combination that is closer to a country/soul/blues fusion somewhere around the middle since there’s a lot of gospel overtones in their too. “Brother Jake” isn’t exactly a heartwarming tale but at the same time it’s one of my favorites here and showcases them modernizing their funk again. Only it’s very much late 80’s sounding.

“River Of Life” and “Mystery Train” are very funk oriented but delve into the blues end of it a bit further,again telling some captivating stories that I won’t spoil for anyone here. “Sons And Daughters” is goes right back to the West Indian style percussive rhythms of Congo Square- with Charlie Neville himself delivering a spoken word lyric to the effect of politics being used as a force to spiritually bankrupt human kind to the point where there’s only “free speech unless you say too much”. “Jah Love” again points to the Afro Caribbean spirituality of the New Orleans culture.

Lyrically and musically the title song is contemplates the idea of brotherhood (both literally and figuratively) over some major chorded Crescent City type funk. The album ends with Aaron’s “Bird On A Wire”,the most sleek and 1990’s style track on this album with it’s (then) fully contemporary album. Even though one might not think of it in precisely these terms,this is a funk album. Not generationally perhaps, or in terms of it’s relation to the funk era of the 70’s. But in terms of how it presents itself stylistically and rhythmically.

This quality is especially significant on the lightly percussive opener “Brother Blood”. It has a very diverse range of  grooves and messages here that somehow all coalesce into itself. Of course when one discuss New Orleans, funk of some sort or another is bound to come into the equation sooner or later. Far as I know? The musical term “funk” itself was born there during the earliest days of jazz. In a nutshell, I suppose that’s the most important thing this particular album reflects. And can add to that importance especially one song in particular here has on the legacy of the late Charlie Neville.