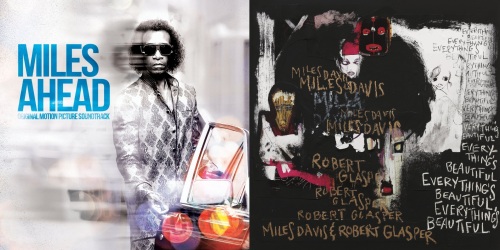 Miles Davis was possessed of a character that was elusive to biographical translation. When Don Cheadle began work on his largely crowd funded motion picture Miles Ahead,the best approach to Miles’ story would be more a personal ambiance than informational. Cheadle imagine Miles Davis as he would like to have seen himself. Along with bits of half remembered personal history and playing witness to fragmented pieces of himself.

Robert Glasper is a modern day pianist who feels exactly the same as Miles did about music in general. That the improvisational art of jazz consistently has to be re-invented with new themes,new standards all the time. And that’s it’s the musician, not the writers/ critics, who sets that tone. Since Cheadle worked with Glapser on  the music surrounding the film,it seemed appropriate to explore the full spectrum of this musical project.

Over the years,I’ve generally avoided soundtrack albums. It seems all too easy for someone to simply pile a series of songs onto the CD and call it a soundtrack. Don Cheadle’s film Miles Ahead takes a more cinematic approach to the Miles Davis attitude as opposed to being a straight biographical narrative. Cheadle was joined by 80’s era Miles alumni in drummer Vince Wilburn and the defiant pianist Robert Glasper in terms of producing this album. The selection of songs for the project could’ve been exhaustive-considering the breadth of Miles’s recorded catalog of music. So instead of going with the traditional method of soundtracks that keeps me away from most,this takes another sort of approach.

Songs that represent Miles’ modal period such as “So What” flow along into “Solea”,the uptempo “Seven Steps To Heaven” and “Nefertiti”. These represent his acoustic period on this collection It goes from there into what Miles referred to as his “directions in music” with songs like “Frelon Brun” and the 6th take of “Duran”. His full blow fusion sound is represented by “Go Ahead,John”,an edit of “Black Satin” and “Back Seat Betty” from 1981. Glasper provides the sax heavy jazz-funk of “Juniors Jam”,the orchestral electric piano heavy ballad “Francessence”. “What’s Wrong With That?” is a flowing fusion/funk jam with Cheadle actually playing trumpet with the surviving members of Miles second quintet of the 1960’s.”Gone 2015″ ends the album with an big horn fanfare of a jazz/hip-hop number from Glasper and rapper Pharoahe Monich.

This album traces the musical legacy of Miles Davis from 1959 through his early 80’s comeback-the time period dealt with in the film. What really makes it a standout motion picture soundtrack is that it takes the Spike Lee approach in telling a story through the full album format. Moments of Cheadle portraying Miles’s famous quotes and statements are put into the mix as interludes between songs. This allows for the soundtrack to feel like a journey one is taking through the mind of Miles. Which essentially reduces down to an audio version of the films intent. Ending with Miles inspired new numbers from Robert Glasper makes this perhaps the sonic film soundtrack experience of 2016.

Over the last several years,Robert Glasper has been seeking to change the vocabulary of jazz. His approach has always seemed to me very similar in that regard to the late Miles Davis. He often has made similar references that jazz needed to look outside itself for new standards on which to create new improvised art. From what I’ve heard of Glasper,he’s largely looked to hip-hop as a musical medium for the nu jazz sound of which he’s a major player. He ended up being the musical directer behind the new Don Cheadle film Miles Ahead. So it was very exciting for me to see Glasper create an entire project based on the man whose musical ethnic most shaped his own.

“Talking Shit” opens the album with a rhythmic sample of Miles’ 1969 discussion with drummer Joe Chambers that sets up the album title-the trumpet players view on music itself basically. “Ghetto Talk” features the soaring vocals of longtime Glasper collaborator Bilal and while “They Can’t Hold Me Down” brings in rapper Illa J. These songs all have blunted hip-hop beats with jazzy funk atmospherics. “Violets” brings in the Foreign Exchanges’ Phonte in for a brooding,slow swinging piano based groove. “Maiyshia (So Long)” has Erykah Badu dealing with an electronic bossa nova with a sassy rhythm. “Little Church” and “Silence Is The Key” deal with a modern electronica reboot of Miles’ classic modal sound.

“Song For Selim” takes on the same effect of re-imagining modality in a current context while Georgia Anne Muldrow sizzles up the electro swing big time for a makeover of “Milestones”. “I’m Leaving You” is one of my favorites here-thick bluesy funk sampling Miles himself with Ledisi’s vocal leads and John Scofield’s guitar. Stevie Wonder comes in for the closer “Right On Brother”-looking Miles’ solo from “Right Off” into a synth bass heavy funk/house context. Glasper didn’t want a trumpet based tribute to Miles here. He knew the man wouldn’t have wanted that. Instead,he showcased Miles Davis’s influence on musicians as a whole. And did so by again re-inventing the nu jazz sound in the most funky possible manner.

Everyone involved in both of these projects understood very well the creative daring and self absurdness that defined Miles Davis’s music during his lifetime. When it came to Robert Glasper creating his own music based on the Miles attitude and musical school,he did so with the maximum amount of strong,extended melody and funkiness wherever it was needed. So for what would’ve been Miles’ 90th year of life,this is a special occasion.

Anatomy of THE Groove: “I’m Leaving You” by Robert Glasper w/ Miles Davis,Ledisi And John Scofield

Robert Glasper shares a lot in common with another musical free spirit in the late Miles Davis. The Texas native got an early start in dealing with the jazz hip-hop style which of course Miles was beginning to embrace during his final years. While in high school,he met neo soul singer Bilal. This led to gigs with other jazz informed hip-hoppers such as Q-Tip,Talib Kweli and the late J Dilla. He made his debut album in 2004,and his major label debut for Blue Note a year later. On his album Double Booked,he began moving towards a more electric sound. But that was only the beginning as it turned out.

In 2012 he released the first in what’s been two separate volumes of his Black Radio series. The subtext for this,which I read in interviews Glasper gave to a music magazine of my fathers, went for the Miles Davis angle that the jazz genre needed to improvise over new standards. Both volumes of this album contain covers of songs such as Sade’s “Cherish The Day” alongside his own material. This year,Glasper appeared with surviving members of Miles’ 60’s quintet in the Don Cheadle film Miles Ahead. And one of the grooves on his upcoming Miles tribute album Everything’s Beautiful is called “I’m Leaving You”.

Drums playing at a five beat pattern with a break between each rhythm lay the bedrock for this song. The bass comes out as a round,ascending bottom while the very scratchy guitar samples play as a purely percussive element. Also on that groove,Miles’ trademark horse speaking voice is re-sampled saying “wait a minute,wait a minute” throughout the song. A reedy whistle,a wah wah guitar and Scofield’s bluesy guitar assist Ledisi’s soulful vocals. On the bridge,Scofield takes a full guitar solo after which Ledisi responds to her own backup vocals while the bass line and drum fade the song out in a silent way.

Having not heard a lot of Robert Glasper, this is by far the funkiest song I’ve ever heard him do. The musical bedrock of John Scofield,who of course played with Miles Davis, is held down by a core rhythm section. As well as what sound like metallic rhythm guitar looped from Miles’ 1972 song “On The Corner”. During his lifetime,Miles tended to deal with funk as rhythm vamps to solo over. Here Glasper takes samples of Miles’ music,voice and puts them into a more structured hard funk context. I have a feeling the late trumpet player would’ve found this groove one that came at people with plenty of attitude.