It was through his collaboration with Phonte on the latest album by The Foreign Exchange that got me interested in the music of Matthjis “Nicolay” Rook. Now this is a Dutch native who has been creating both solo albums and different collaborations within the funkiest side of the electronica/hip-hop/soul spectrum of music. His emphasis on live musicianship with his acumen as a multi instrumentalist is a big part of his artistic appeal for me personally.

Over the past decade,Nicolay has released a series of solo records in his City Lights series. Generally weaving them directly in between his released as a member of The Foreign Exchange. I’ve never had one of these albums. Yet the newest volume of this was subtitled ‘Soweto’-as a tribute to the South African township of the same name. And through online streaming? It was it’s opening song “Tomorrow” which caught my ear the most.

Beginning and ending with the voice of what is perhaps Bantu language conversation in the back-round? The song begins with a round bass synthesizer chord-accompanied by breezy orchestral electronics. Suddenly a burst of intense percussion kicks in for the main rhythm of the song-with congas,high hat and other Afro-Latin percussive sounds. On the bridge of the song a high pitch,and still round toned series of synthesizers play a horn like jazzy riff before gearing down into a higher pitched synth scaling up and down. All before the song ends with a light Ebonic vocalese.

One of the things I enjoy about this song is some of the same quality I heard on “If I Knew Then” from The Foreign Exchange. This song is of course far faster and electronic in straight up instrumental tone. That being said? Nicolay borrows a lot of his technique from early/mid 80’s Prince. In the sense that he is a master programmer and creator of live rhythmic and warmer,brittle bass lines with electronic drums and keyboards. It also helps greatly that he’s also an electric bassist and guitarist as well. He therefore understands the importance of a fat,rhythmic groove. Whether or not it’s produced organically. Along with it’s similarity to 1980’s Miles Davis and Weather Report? This song brings out the link between funk and contemporary electronica very strongly. 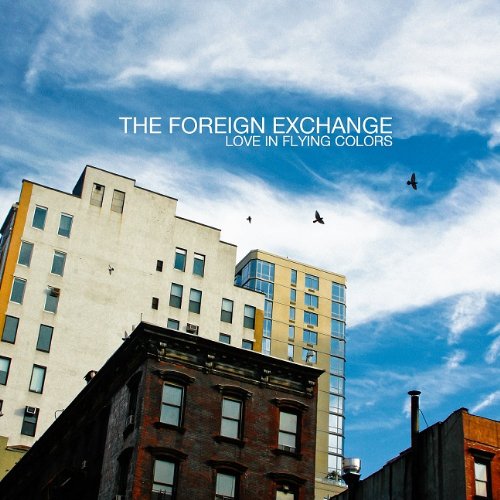 Just 24 hours prior to writing this review, a friend of mine named Thomas Carley recommended I seek out the latest release from The Foreign Exchange. Came into streaming some of their songs without knowing anything about the band members or their histories. Even now I still know very little. All I do know of them comes from another friend Henrique. He informed me that the bands founder Phonte was apparently a member of a group called Little Brother-a hip-hop group hailing from Durham,North Carolina. Knowing how hip-hop groups often spin off into completely alternate musical projects such as this,none of that information surprises me one bit. What did surprise me was how they musically presented themselves in the accompanying CD booklet. Some of the music of course is supplied by keyboardist/multi instrumentalist Nicolay. But this album also features,and credits with a great deal of enthusiasm,their 19 piece string section as well as it’s arrangers and conductors. That level of respect for the ethic of cinematic music production correctly led me to believe I would be in for a real treat with this album.

“If I Knew Then” opens the album with a wonderfully expansive funk/jazz fusion number-with melodies and rhythms elevating right up there with the many classics of the late 1970’s end of that genre. “Right After Midnight” continues on with a powerful synthesizer boogie funk number. This returns to even greater effect on “On A Day Like Today”-a number with enough early 80’s post disco rhythm box/electronic invention and song craft to make it a potentially enormous hit somewhere even today. The more acoustically textured guitar led jazz-pop of “Better” is equally wonderful-especially Phonte’s obviously growing vocal turns. Only wild card is a somewhat foul mouthed rap insert from him that,while delivering what turns out to be a good message,is more than a little out of place. “Listen To The Rain” returns to that flavor with a full vocal take with no rap. “Call It Home” brings a drum-n-bass rhythm flavor to this jazzy funk compositional attitude whereas the house fusion of “The Moment” recalls Incognito to some degree.

“Can’t Turn Around” returns to the expansive 70’s fusion-funk take and “Dreams Are Made For Two” returns to the drum machine led boogie funk before blending the two seamlessly for the closing “When I Feel Love” which,through that hybrid sounds close as this album comes to a modern hip-hop based funk-pop production. This album actually succeeds on every level it’s creators intended it to. The harmonically rich female vocals of Carmen Rodgers,Shana Tucker,Gwen Bunn,Carlitta Durand and Jeane Jolly combine with Phonte’s creamy delivery for a very meaningful and poetic combination of instrumentation and lyricism. The two rap inserts are both well harmonized from the music and are at least from within,which is refreshing in the tail end of the guest rapper age. The way the albums themes are presented are very much in tune with something of a cornucopia of the tail end of the funk era-the stylings from roughly 1977 through 1983 coming into full flower here. The Foreign Exchange are not new and are apparently a live act of high quality. Personally I’d say if this is the direction Phonte is taking them? I’d keep going for it if I were him.