The First Rhythm: A Narrative Poem By Andre’ About Music, Art & Sharing 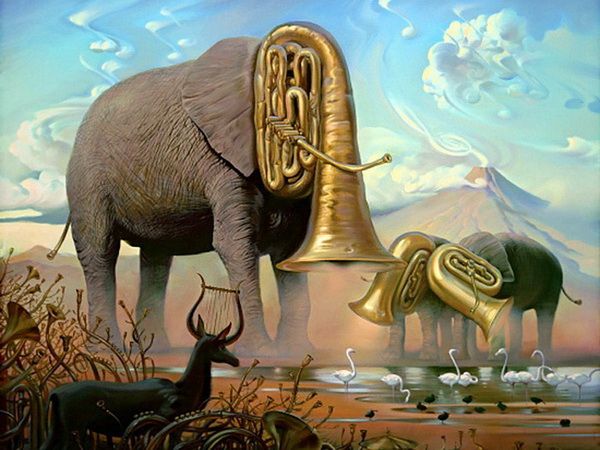 The first rhythm came from the rustling seas. There were the melodies of the dinosaurs-calling out with the cracking rhythms as the super continent of Pangaea broke up to make the world. Millennia after millennia, the music went on. From the call of the first wild mammals and birds. From the first hominids- beating their sticks. Building their wheels. Beating their drums to celebrate their harvests, their celebrations, their unions of love. From drum to horn. From harp to piano. From the concert hall to the first vinyl pressing. From Beethoven to Ellington. From Miles to Wonder. Its an ongoing adventure.

As the newest millennia dawned, the human race was in a whole new age. The computer age. The age of the world wide web. Socializing became social media. The young would one day walk the streets talking to one another. Not always with their voices. But with their hands on their phones. From real life sci fi to real life wi fi. The tap of the human fingers on the digital keyboard continues dancing to the rhythm. The music of an entire century of recording through ringtones. The rhythmic clicking of keys both real and unreal.  The music goes on and on by the day and night.

Bigger worlds lead to bigger worries sometimes. One person’s temporary condition is another person’s cause. Many of us know a cause can cause problems if we don’t like the effect. When it comes to the internet and music, a song or a sound spreads to people faster. To the world over. And that comes after another condition where music and sound are servants and slaves. Brought and sold as property. And the conflict arises. To use legalities to limit. Or have more music, available to more people than other time in history, for free. Its become a year by year, day by day game of musical keep away.

I am just one of many in this world. One of many who shares what I know about music that goes back to the post Pangaea world. That first drum on the dark continent, and its many children. And from this little spot on this world wide web, I am sometimes tangled in confusion. The oral tradition turning into litigation. A healthy musical society turning its sights fast onto privacy. For those of us who share our knowledge on music given to us, learned by us to you? Let that knowledge flow. Do not hush even one voice in this musical world. Let the music and what we know about it go on, and on, and on. Forever.

Anatomy of THE Groove 6/20/14: Andre’s Pick-“Leviticus: Faggot” by Me’Shell Ndegeocello

Personally I can truly relate to Harvey Fierstein’s remark about having to have to a literal translation of heterosexual romance to apply to who I was as a homosexual man. Right in the middle of when I was getting deeply into funk and soul? I’d often find myself asking “why are these love themed songs about the opposite sex only?”. Many years later,I would learn of the homosexuality of the late Wayne Cooper (from Cameo) and Billy Preston. Also,and somewhat unfortunately of the homophobic content of Gil Scott Heron’s ‘The Subject Was Faggots” and,far less overtly Graham Central Stations otherwise extremely funky song “Mirror”. But during much of the 1990’s? Any reference to homosexuality in funk/soul music was truly a dark theater. As was often the case with me growing up,my father introduced me to the song that really changed this factor in my adolescent life. And before he was (at least admittedly) are that I was gay no less. Not only that but it was the revelation of a new artist-during that personally disturbing summer of 1996. The artist was Me’SHell Ndegeocello,the CD was Peace Beyond Passion and the song was called “Leviticus: Faggot”.

The song begins with a high hat drum kick that increases in volume until Me’Shell’s sturdy,popping and ascending bass line kicks in-very prominently so as well. Surrounded by layers of wah-wah guitar and even a cinematic string section? The music is as straight up mid 70’s “united funk”,as writer Ricky Vincent refers to it,as one could possibly get. Me’Shell half sings/rhythmically speaks in her slippery baritone as she tells the tale of a young gay black man-as she describes a situation where “daddy’s sweet little boy’s just a little too sweet”. As she illustrates his desire for love “from strong hands” and “wanting the love of a man”. The chorus immediately turns into a full on hallelujah gospel chorus of “his mother would pray” before returning to the full on funk approach as Me’Shell states the actual prayer of “save him from this life”. The story continues on as the mans father tries to find him that woman “fine and beautiful” to give him more acceptability among the family’s social circle. After finally throwing his gay son out of the house,the music suddenly turns to an uncertain electric piano based jazz-funk sound as the song closes-with Me’Shell’s harmonizing vocalese leading out.

One thing that I never told my family,or anyone else for that matter until now, is that this song was the beginning of a six-seven year thought process that culminated in me coming out of the closet. I knew my family would never conceive of reacting as the father in this songs lyrics did. But in the end,Me’Shell provided a means by which funk was not only changing my perceptions of music. But funk was also now instrumental in helping me to come to terms with the truth of my own sexual orientation. The thing that really moves me about “Leviticus: Faggot”,it’s title of course referring to the often opportunistically quoted-out-of-context biblical verse,is that it came out long before any massive LGBT oriented activism was in the media. Very few homosexual male celebrities,especially in the black community,were truthfully discussing their sexuality. And even Ellen DeGeneres was still in the closet at this time. KD Lang not withstanding. Though I was aware that Boy George was bold enough in his soulful and funky new wave era music to sing to and about male characters in his songs? The fact that Me’Shell Ndegeocello,herself a relatively new up and coming artist,was making “people music” funk in a Nina Simone style about the then still uncomfortable subject matter of homophobia at this particular time? It showed me how much bravery and fearlessness she has. And that any person who are who they are should really have in terms of speaking,singing and playing the truth about themselves.

One of the most surprising musical moments of my life was when I was browsing through Bull Moose Records in Bangor and found a copy of an EP by Ashford And Simpson from 1996 featuring…Maya Angelou? I was so puzzled by the seemingly odd creative fit that I avoided the album time and time again. Yesterday I was met with the unfortunate news that Miss Angelou had passed away at the age of 1986. She was one of those individuals who had an amazing life-a black Silent generation woman who achieved an enormous level of literary respect on her own. And someone whose prose,verse,dignity and grace of person not only earned her much acclaim but was an enormous influence on the careers of many diverse figures-from Oprah Winfrey to Barack Obama. Realizing Motown being founded by a group of eager Silent generation artists looking to present music with grace and dignity? I suddenly realized just how appropriate Maya’s collaboration with Nick & Val was. Especially upon hearing their song together entitled “Sweet Thing”.

The song opens musically with an echoing, Clavinet like synthesizer that rings out a tinkling blues riff before the drums kick in and this foot stomping rhythm & blues shuffle kicks in,full of hard gospel/soul style horns and a thumping bass-all with a slickly contemporary production twist of course. Nick and Valerie start in by alternately harmonizing on what begin as passionately romantic lyrics that have that great storytelling quality that most classic Motown songs possessed. After their their harmonized chorus,Maya chimes in offering her own spoken word impressions of a similar impulse. She utilizes her imagistic metaphors,which would not be out of place had they actually come from the pen of a Smokey Robinson. A favorite lyrical aspect of Maya’s part of the song for me is when she says “when the world asks me what’s my favorite film,I say St.Louis Blues and he plays it a little” . She goes on to say “If someone asks me how to call your name,your a riff by Bird and solo by John Coltrane,your the whole Misssissippi river the the whole coast of Maine”

The lyrical imagery that Maya Angelou bought to this song enhances the fact that this is actually extremely hard driving,high quality funky music-especially for its era. During the mid 1990’s,many Silent generation veteran musicians were rather concerned with sounding “new” rather than being true to themselves. A trend that continues to this day to  a degree. While musical styles of past decades accomodated many generations? The post hip-hop world was a bit more fickle in that regard. What Maya Angelous and Ashford & Simpson did on this song was not only modernize classic shuffling rhythm & blues music,by that time largely a brand name whose true meaning seemed lost,and looked to remind a younger and often more profane youth culture that the concerns of the three generations of black people living at the time were not as divergent as they seemed to be . While Maya herself could politely ask her friend Richard Pryor to leave her home due to his profane language? She also realized that romance and hope were something that would far outlast one rather cynical age. And both musically and lyrically,this song with Ashford & Simpson bought that to the table when it was perhaps most needed. Both the late Nick Ashford and Maya Angelou will be missed,yet their legacy together as artists will remain in works such as this