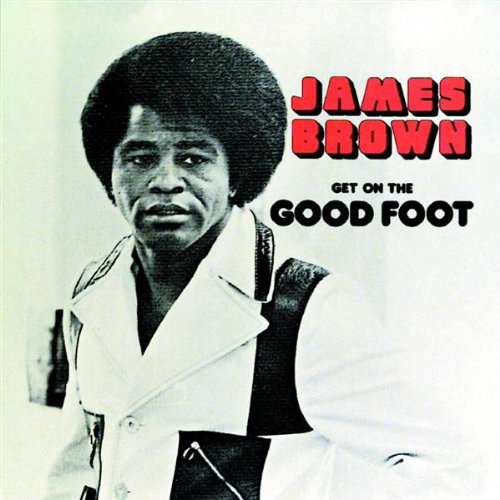 James Brown was one of few artist who,upon first hearing the box set Star Time,made a thoroughly positive musical impression on me. Only one song didn’t then nor fully does now make a huge impact on me. And of all songs it was “Get On The Good Foot”. Its one of many 70’s funk classics of course. Just when set up with so many of his classic extended funk pieces such as “There It Is”,”Hot Pants”,”Soul Power”,”The Payback” and “Funky Drummer”? Something about the groove didn’t have the same vitality to me somehow. And that opinion seems strange to any friend or family member I tell it to.

This song is also the title song of James Brown’s second 1972 album. Its one which I saw for years on CD. Mostly at the old Borders Books & Music. Yet my lack of interested in the title song had me avoiding it. That continued onto the period when I began exploring original JB albums-always favoring The Payback or any of the Apollo live albums over Get On The Good Foot. It became somewhat rare on CD and vinyl in my area during this time. When I started to here more about what the rest of the album had on it,was luckily able to snag an inexpensive used CD of it and take the whole thing in.

James Brown seems to have presented even his studio records in much the same manner he did his life shows. You would have re-workings of classics from his catalog. And he’d take the grooves and songs he was currently working-and put them into that mix. That had the effect of making JB’s studio offerings in his salad days rather more intimate affairs than most. I personally was first exposed to the title song of this album plus “I Got A Bag Of My Own” via JB’s box set ‘Star Time’. After taking many years to track this,Brown’s first double studio album,down on CD, it became clear just how important this enormous musical statement was to The Godfather at the height of his funky innovations.

The title track of this album is one of his known classics. For unknown reasons,this particular groove is the only JB funk jam that never totally moved me. Surprising considering how bass/guitar/horn driven it is. On “The Whole World Needs Liberation” a Latin soul jazz styled groove-filled with percussion,electric piano,heavy bass and strings illustrates a vocal call for freedom. “Your Love Was Good For Me” is a beautifully orchestrated Chicago type sweet soul number. “Cold Sweat is done up as a faster,slightly more modern take six years after the original. There’s also a recitation over a cinematic soul backdrop from Hank Ballard about JB’s musical cultural importance.

“I’ve Got A Bag Of My Own” is one of JB’s most fiery funk jams-with its percussion rhythm and deep bass/guitar chord. The almost rocking intensity of “Funky Side Of Town” keeps a similar groove percolating along with “My Part/Make It Funky”. “Nothing Beats a Try But A Fail” is a 6/8 time bluesy soul ballad of determination whereas the album ends on a similar note with “I Know Its True”. “Please Please”,a retake of JB’s first hit from 1956 is a 12+ minutes musical treatise on everything from brotherly love to his bands origins in the American South. There’s also a retake of the earlier R&B shuffle of “Ain’t That A Groove”,there’s the slow jazzy blues instrumental horn shuffle of “Dirty Harri”.

Since I first began listening to James Brown intensively just over two decades ago,have been gradually exploring his original albums. Especially the ones from the early/mid 70’s. It would seem from listen to this album that 1972 was an extremely strong year along for him musically. With the classic JB lineup in full affect here,this album is assembled as something of an in studio concert. With no breaks between the songs. Some songs are cinematic soul in par with the early 70’s blackspoitation era,some are tone ballads and others are just seriously funky. Its got all sides of classic James Brown of the early 70’s-perfectly capable as keeping it just as live in the studio as he would on stage.

Its kind of a funny afterthought that my friend Henrique and I both grew up during a time when James Brown’s 70’s studio albums were all back in print on CD along with his numerous compilations. As for my case,ended up passing them by for purely monetary reasons. Even though many of them were out of print by the time I could’ve afforded them,have always endeavored to hunt them down. And each time I do,there’s something to learn about the way James Brown presented his recorded music. In every way what the Star Time box set did for me when I first heard it.

Get On The Good Foot actually has the total opposite effect for me that the song first had. And even has me appreciating more hearing it in its native context. This is an album that actually pushes the JB funk sound-based on repeating phrases “on the one” and lushly orchestrated mid tempo/ballad melodies into an album length concept. And in doing so, Get On The Good Foot was a dry run for JB’s next double album opus in late 1973’s The Payback. In the end, this is an album that might’ve been the one that really put it all together for James Brown in terms of the best way to present his studio albums.

*Here’s a link to the Amazon.com review I did of this album that this article is based on. Please click on the review and click the yes or no button there if it helped you or if you liked it. You’ll be glad that you did. And it might even be good to you!