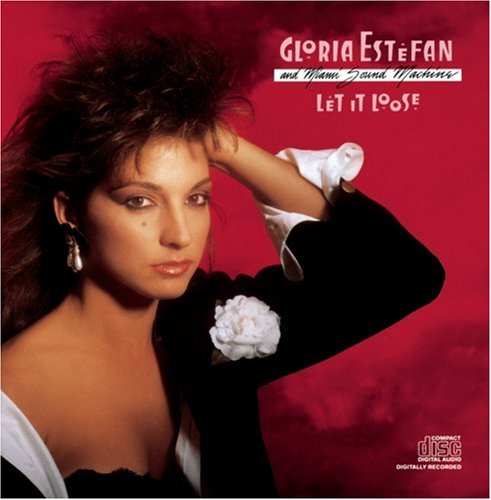 By the late 1980’s when this album came out, so much had changed for Gloria Estefan. An And for just about everything in the Latin-pop/freestyle field of dance music-which had come to rely a lot on people such as Lisa Lisa And Cult Jam as much as Gloria. And it was Estefan who more or less got the ball rolling. This is the album where her roll as a singular Latin diva really began to shine on her own. It’s not clear despite her top billing over Miami Sound Machine (which would continue on the next album) if this album is her solo debut or the final group effort.

Actually, this album wound up being something of a mixture of both as “Emilio And The Jerks” are credited for production. So it’s likely they would be more considered to be her backing band here than her being in more of a participatory role. What mattered most here is just how wonderful an album this is overall. There are some times where an album is based more in uptempo music or ballads. On this album anything, regardless of tempo, is very well done. Now this was recorded in 1987 so the album is arranged with a heavily “contempo” electro-dance style sound.

All the same, every synthesizer used here is used as a rhythm element. So this album is primarily based in rhythmic uptempo numbers such as “”Betcha’ Say That”,the title song,”Give It Up”,”Love Toy” and “I Want You So Bad” so for those who couldn’t get enough of the huge hits “Rhythm Is Gonna Get You” and “1-2-3” will find the rest of the album is very consistent AND equally as poppy. So there’s no filler material here. There are two ballads here-both very different. My favorite is “Can’t Stay Away From You” which is of course the more rhythmic of the two.

“Anything For You”,which with it’s big ballad sound really showcases the more vocal style of Estefan’s music to come. I’ve always been the first one to say that with all the saturation radio play of their hits Gloria and Miami Sound Machine were one of the more unheralded pop phenomenon of their time and their music was highly impressionable on the big Latin pop boom of Ricky Martin and such a decade or so later. And during the the mid to late 80’s the electro/synth dance music of the day got just what it needed in the pulsing Latin rhythms of the freestyle movement.

The freestyle dance approach is one Miami Sound Machine (among others) helped to pioneer. So I’ll always remember this album less as a period piece (as some people might) and as an important step forward in terms of how,at different times, Latin musical styles have helped rescue pop music from rhythmically stifled time periods even when it seemed other significant musical genres could not. Let It Loose would not be the final album credited to Miami Sound Machine. At the same time, it represented them as a significant part of 1987’s vital focus of live and electronic sounds in dance music.

Anatomy of THE Groove: “Lucky Star” by Madonna

Madonna Louise Ciccone and her place as an American cultural phenomenon requires no clarification. From the early 80’s onward, she has been both a fashionista and a trend setter at the same time. What always interested me about her early days as a hungry and ambitious dreamer from Rochester Hills,Michigan is that she climbed up the musical ladder based (among other things) on the music of the black and Latin club scenes of post disco NYC. That has enabled her to not merely follow but often anticipate changes in danceable pop music throughout the decades.

Seymour Stein, co founder of Madonna’s label Sire Records, once spoke of Madonna’s first single (which was a 1982 song called “Everybody”) as not having her picture on the sleeve. He said the reasoning for that was that he felt she sounded like a black post disco artist. And had the opposite approach to what Motown did for Teena Marie in trying to make believe Madonna was black. Valid as a story or not, Madonna’s association with Mtume’s Reggie Lucus on her self titled debut album does make clear her musical connections. That also goes for one of the albums breakout singles “Lucky Star”.

A twinkling, high pitched synth riser begins the song. Then Reggie Lucus’s LINN drum dance beat comes in along with Paul Pesco’s melodic,chunky rhythm guitar. The brittle synth bass pops on every beat or two and is high up in the mix. Light synth horn accents are the order at first. Than by the refrain and chorus, there’s more sustain to the synths. There’s also an iconic be section-with has a thick grooving guitar from Pesco that’s punctuated by pitch pent synth stabs. After a couple such sections, the song settles into an extended chorus until it all fades out.

“Lucky Star” appears a relatively simple song at first. The melody is focused on Madonna’s voice and singability in general. What the production and electronic instrumental touches of Reggie Lucas brought to the song is a mixture of the brittle rhythms of post disco boogie funk, the solid beat of disco and the synthesized approach of new wave. In essence, it allowed Madonna to popularize and to a degree innovate the genre known as dance pop. Madonna herself once said all the negativity regarding her lack of talent helped her to do even better. And this song really set her notoriety alight.

Anatomy Of The Groove: “Jeopardy” by Greg Kihn Band

Greg Kihn,a Baltimore native same as funk icon Rick James,followed his early musical dreams to San Francisco. While still in high school, his mom helped him by submitting a demo to a local radio station while he played coffee houses locally . He moved to the bay area officially by 1972-painting houses,busking and working at a record store in the city of Berkeley. He eventually became part of Beserkley Records label as one of the first acts signed to it-along with other future rock icons such as Johnathan Richman of the Modern Lovers.

By 1976 he had his own group called The Greg Kihn Band. There biggest hit to date was the power pop classic “The Breakup Song” in 1981. During the early 80’s post disco era, the American popular music pendulum tended to swing towards guitar based rock songs. Still as with the decade before it, funk and soul could be found in any section of the record store. Often cleverly disguised by presentation as something else. New wave/synth pop of the era was a mainstay for this. But mainstream rock got a taste of this with the biggest hit Greg Kihn’s Band ever had with 1983’s ‘Jeopardy”.

Gary Phillips’ Clavinet riffing is heard with (as far as I know) Kihn’s own reverbed guitar chords providing a texturing accent to that and Larry Lynch’s steady drum beat and Steve Wright’s slinky, often elaborate bass line pattern . This pattern continues on throughout both the refrain and chorus of the song-with the chord changes reflected the changes in Kihn’s raspy vocal leads. On the bridge, Lynch’s drum plays a three note hit every other beat to the call and response Clavinet and guitar. Kihn’s bluesy guitar riff plays off the pounding drum for a more rockier pattern as the song fades out.

“Jepordy” is now seen as an 80’s rock classic-due mainly to its conceptually interesting MTV video and a hilarious parody by Weird Al Yankovic. But even I sometimes feel like the only one who might listen to this outside its accepted context and hear it as a driving funk/rock jam with a catchy song attached to it. The Clavinet grooves hard on this song,the drum maintains its driving post disco vibe. And the guitar plays something of an accessorizing role-atypical of much mainstream rock. That makes this both a potentially misunderstood and still beloved 80’s pop classic.

Anatomy of THE Groove: “Need You Tonight” by Inxs

Inxs were an Australian band formed by Andrew,Jon and Tim Farriss  at the end of the 70’s. The band also included bass player Gary Beers and the late (and charismatic) lead singer Michael Hutchence. From their debut album in 1980 onward.the bands sound grew from post punk/ska/guitar based new wave into a stripped down,dancefloor friendly funk rock sound. This began to happen in a big way with their 1984 album The Swing and its Nile Rodgers produced hit “Original Sin”. This continued onward with their horn fueled smash “What You Need”  from the follow up album Listen Like Thieves.

The first time I ever heard Inxs was during 1987-1988. This was that period where energetic and cutting edge funk was not only getting back on the radio,but also making its influence felt again on the rock scene. This was often captured in the VHS collections of music videos from MTV my father would bring home for me to watch. A couple were Inxs videos of hits coming from their latest album at the time Kick. One of them was a song that has stuck with me so much,it remains among my favorite songs of them-especially from the funkier side of their musical personality. Its called “Need You Tonight”.

A heavy bass/snare drum kick starts off the song before Hutchence whispers “come over here”. That’s when the first rhythm guitar kicks in. This plays three quick chords,then a descending vamp. After that the pumping bass groove and lower,post disco/boogie rhythm guitar kicks on. These two compliment each other with a burst of reverbed keyboard as an accent. As Hutchence and the Farriss’s trade off call and response lead and backup vocals on the choruses,two rocky guitar chords. This represents the refrain/chorus pattern of the song. There is only strategic break of complete silence before entering into the last chorus of the song before it ends up Hutchence,without backup sings “your one of my kind”.

“Need You Tonight” is a song that I’ll always admire. Having learned so much about music,yet also knowing so little,still have my doubts as to whether people would consider this song to have any particular connection to disco/funk whatsoever. That being said, it does seem to be the basis of this song. From the multiple rhythm guitars playing call and response with Hutchence’s sexually charged vocals,it has the vibe of how a late 80’s pop /rock equivalent to the Rolling Stone’s might deal with contemporary black music of their time. That makes it a great personal standout of that ever important 1987 year for funk.