Too Hot To Handle: Heatwave’s Debut Album’s 40th Anniversary In the US 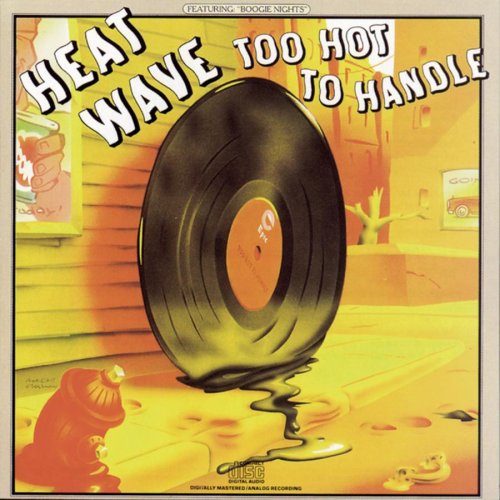 Heatwave had been a huge international disco era funk mainstay from the get-go. When the late Johnny Wilder Jr began assembling the band while in West Germany-following discharge for the US Army in 1975. In 1976, the band released their debut album Too Hot To Handle in the UK. The original album cover art was a painting of a sun’s horizon over the sea courtesy of Norman Moore. The album was released on May 30th of the following year in the US. It was given a new cover. This one a comic book design of a vinyl album melting on a sidewalk-this time done by Robert Grossman.

This albums 40th anniversary has already passed. Oddly enough, it was one of the last Heatwave albums I actually investigated. Due to a broken CD player, my first copy of it succumbed to laser rot. A couple of listens to this album gave me to realize that its one of those albums that deserves a full form review of its contents. All the songs on it were written by the late,great Rod Temperton. And most of them showcased Johnnie Wilder’s dynamic, rangy vocal interpretations. So here,song by song is my own overview of the album. Not song by song exactly. But taking each of them as part of a wonderful whole.

The album starts off with a three prong uptempo punch. First is the title song-which uses call and response horn lines and slinky synthesizers playing similar melodic riffs-right along with the vocal trades of the Wilder brothers Johnnie and Keith. “Boogie Nights” starts off with a swinging,guitar based be bop type intro before heading into a driving Moog bass driven groove-one with funk functioning as top end disco. “Ain’t No Half Steppin'” is heavy bass/rhythm guitar oriented funk that’s directly descended from James Brown. Especially with its condensed, funky drum/percussion based bridge.

The album showcases a diverse range of songs from there out. The vocally epic,Philly style “Always And Forever” is a wedding dance classic now. It was recorded by Johnnie vocally as if he was performing live-ad libs and all. “All You Do Is Dial” has a gentle jazzy pop flavor while “Sho ‘Nuff Must Be Luv” has a cinematic Chi Town soul ballad approach. Those are the main ballads of the album. There’s also “Super Soul Sister”-a guitar and Clavinet fueled funk number that starts into a jazzy swing similar to “Boogie Nights” on the bridge.

“Lay It On Me” has a smooth funk vibe with a driving bass Clavinet,muted trumpet, strings and again Johnnie Wilder’s voice leading the way. The album ends with a nostalgic look back at old school child discipline on the (again) James Brown style funk of “Beat Your Booty”-this time with an open,round synth bass wash goosing the lead and harmony vocals along. Overall Heatwave got off to a powerful start with this album. Their basic sound was still built around the songs being played live. Still,their reputations as masters of the disco era funk/soul sound in the studio shines strongly too.

This band that was a little Dayton,a little continental Europe really showcased themselves as extremely funk oriented here. Not long after this, members of this group Rod Temperton and Johnnie Wilder Jr would become linked in different ways to the launching of a record breaking superstar in Michael Jackson. But with the massive hit success of “Boogie Nights” and “Always And Forever”, Heatwave came right out of the box as a funk band who could play serious grooves,right serious songs and sing serious melodies.  And for that, I have no doubt their legacy will live on.