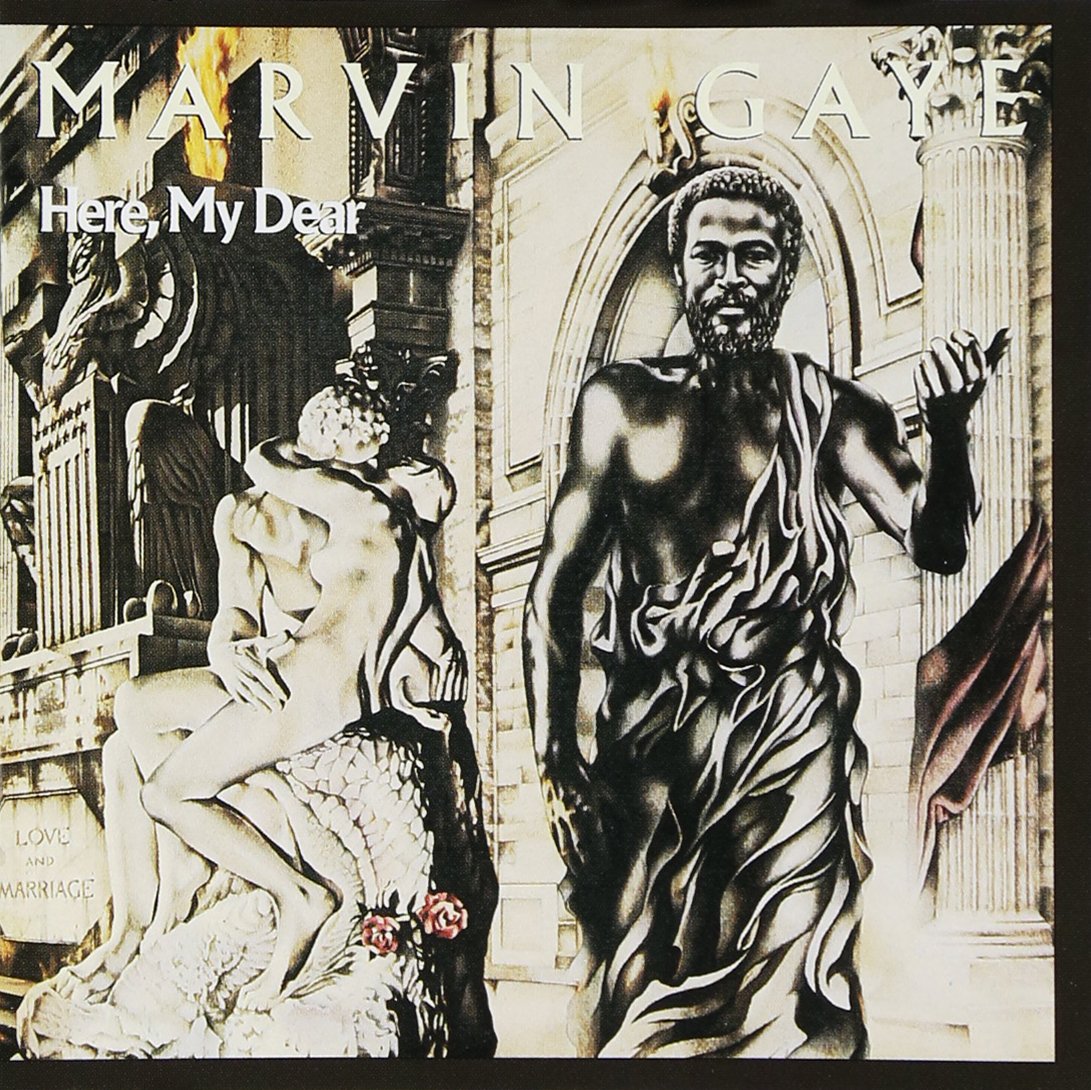 Marvin Gaye’s back story for his fifteenth studio album is well known by this point. Gaye’s wife Anna Gordy sued him for divorce following as he was pursuing a relationship with teenage Janice Hunter. And it was agreed that half the proceeds from his next album to go to Gordy as part of the divorce settlement. At first considering making a lukewarm album out of spite, Marvin decided to weave the reality about the end of  his marriage into one of his musically cinematic narratives- with a conceptually abstract twist. That was the nucleus of the album that became Here, My Dear.

The wah wah heavy title track starts out the album. As writer David Ritz pointed out, Marvin’s vocal harmony based style is rooted in doo wop. And the 70’s funky soft soul of this number, in the 6/8th country/soul shuffle tempo. “I Met A Little Girl” has a similar style- only a bit gentler reflecting both early 60’s Motown balladry and its narrative about the 12 years of his marriage to Anna. “Everybody Needs Love” is a moment where the basic groove of the opening title song extends into a full blown self examination of Gaye’s view on love in general.

“When Did You Stop Loving Me, When Did I Stop Loving You” is also reprised as an instrumental. But its a whole other beast musically- a powerful, percussion laced groove filled with the kind of jazzy chords and melodic exchanges this album celebrates. Now for songs that get heavily into the jazz styled vibe? “Sparrow” alternates from blues to Afro Latin percussion-including a bop styled sax solo from Ernie Fields. “Is That Enough” goes for a cinematic approach that showcases not only heavily arranged orchestration, but a section of the song where the musicians jam away without lead vocals from Gaye.

“Anna’s Song” returns to the medium tempo R&B shuffling of “Trouble Man” from seven years earlier. “Time To Get It Together” gets deep into the thumping,percussion laced funk groove-filled with Marvin’s melodically soulful yet futuristic synthesizer playing. “Anger” and “A Funky Space Reincarnation” are both musically based on the same type of sophistifunk Rhodes/wah wah/percussion based funk crawl. Each conceptually contrasts the other. On the former, Gaye is reconciling his scattered emotions. On the latter, he in on a sci fi odyssey with Anna-attempt to seduce her in with “Venusian smoke”.

“You Can Leave, But It’s Going To Cost You”  is another funk number-this time with a more bluesy style of bass/guitar interaction as Gaye illustrates with journalistic clarity his final attempt to reconcile with his estranged wife. The almost Barry White like cinematic funky soul of “Falling In Love Again” goes into his assumed future with Janice. Over the years, my friend Henrique and I have discussed this perhaps more than any other Marvin Gaye album. It was actually first brought to my knowledge through my father purchasing the 8 Track during the 1990’s.

Having heard it with this depth of musical knowledge today? Here, My Dear emerges as probably the most funky breakup album to have been released. While it plays out like the kinds of cinematic soul album opera’s that Gaye had been doing with Leon Ware? A good cross section of the music gets as deep into a contemporary late 70’s sophisticated funk groove with a number of variations in flow and style. From deep in the pocket to jazzier and free flowing. And that goes directly with the “moods of Marvin Gaye” during the time this was recorded too.

With musicians such as guitarists Gordon Banks and Wali Ali interacting with  bassist Frank Blair? Not to mention the drum/percussion flow of drummer Bunny Wilcox with percussionists  Gary Jones and Elmira Collins? The added sweeteners of horn players Nolan Smith’s trump and tenor sax players Charlie Owens and Fernando Hawkins all play their roles in providing what amounts to the soundtrack for the divorce of Marvin Gaye. This is even played out in the Monopoly game of “judgement” on the albums back cover.

Here, My Dear didn’t endear itself to Anna Gordy at first. As David Ritz explained in his Gaye biography Divided Soul, Marvin invited Anna to a private listening of the album. Its conceptual voyeurism had her contemplating a suit for invasion of privacy.  That didn’t seem to have occurred. As my friend Henrique also pointed out, the modern cinematic video approach of a Kanye West might’ve helped visualize Marvin Gaye’s narrative on this album. Gaye did however help innovate the confessional funk approach with soul, class and imagination. Resulting in another album that continues to age like fine wine.