‘Street Player’ At 40: Rufus & Chaka Khan At The Crossroads Of Funk 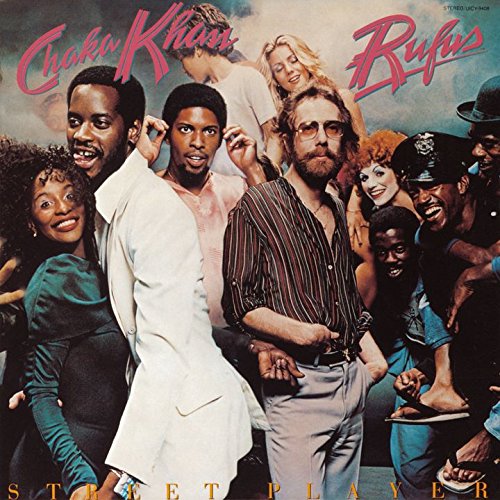 Street Player followed the Ask Rufus album in 1978 with Chaka and the band finding themselves facing new territory. Drummer Andre’ Fischer had departed due to a falling out with Chaka involving her alcoholic and micromanaging husband Richard. Chaka was also moving towards the solo career that seemed inevitable after three of the original band members left in 1974. Not only that, but the band were now without a drummer. While they searched for a more permanent replacement, the band bought in former Leon Russell session drummer Richard “Moon Calhoun for this particular session.

As keyboard player Nate Morgan departed during that same time, David “Hawk” Wolinski, who had co-written the previous albums “Hollywood”, joined Rufus as a regular member. His playing, writing and even singing projected a stronger physical personality into Rufus that no one had possessed since Tony Maiden joined the band in 1974. Since the more reflective (and occasionally slower tempos) of the previous album didn’t always meet with the greatest of enthusiasm, the band decided to take a more contemporary production of their more classic uptempo funk sound.

The title song of this album was written with Hawk and Chicago’s Danny Serephine, and that bands version was included on their 1979 album Chicago 13-an album musically similar to Rufus in many ways. Chaka herself composed “Stay”, a more mellowed out bass/guitar type groove somewhat similar to what was on the previous album yet strong enough to endure as one of her classic songs. “Turn” is a unique hard funk song. Very bluesy in orientation and full of powerful horn, bass/guitar and organ interaction. Moon Calhoun also maintains the classic stop/start rhythmic complexity here.

“Best Of Your Heart” is a melodic, jazzy mid tempo ballad that swings right into the fast paced,percussive Brazilian jazz instrumental “Finale”,featuring a tremendous synthesizer solo from Hawk. “Blue Love” is one of my favorite songs here-starting off with a melodic synth line,it goes from somber break up ballad into an uptempo jazzy funk jam as the confidence level in Chaka’s lyrics rise as the song concludes with understanding “you never know love until somebody leaves you”.”Stranger To Love” is a powerfully orchestrated ballad-built upon its strings and flanger filtered drums.

“Take Time” is one of my favorite Rufus instrumentals-a very bass oriented in the pocket kind of groove with a very strong synthesizer counter melody with Tony Maiden rocking out pretty Hendrix style on lead guitar solo. “Destiny” is a wonderfully melodic bossa/jazz-pop type number that Chaka gives one of her all time stand out vocal performances. As far as I’m concerned? Its one of her classic songs. “Change Yours Ways” ends the album in a very jazzy funk mode-again with somewhat drastic shifts in tempo. This gives Street Player a truly unique quality about it rhythmically.

Each song tends to be like a pocket jazz/funk/soul symphony-often with two unique parts fusing into a single song. And considering what Rufus were experiencing at this time, its only fitting that the lyrical focus of this album zeroed right in on themes of change and growth.  That leaves Street Player as basically the culmination of Rufus’s classic sound. It still has the unique instrumental trademark of mid 70’s Rufus, but a lot of the lushness of the latter 70’s era. In many ways? Its one of Rufus’s most creative, strong and enduring musical works. Especially with its focus on uptempo songs of different musical colors.

Chaka Khan hit yet another personal rough patch last year so it seems. Thought she had to cancel her concert tour to re-enter rehab,she has reached 64 without succumbing to last years “funkapocalypse” of musical artists deaths. Though her solo career has been an amazing progression,there will always be something a bit magical to me about her grooves with Rufus. Especially in the mid 70’s to early 80’s. The scope of evolution from their blues/rock oriented early sound to a uniquely produced jazzy funk sound in their later years really came into focus on their 1978-just prior to Chaka going solo. The name of that album was Street Player.

This album marked the moment when David “Hawk” Wolinski became an official member of the band. And their one and only album featuring Andre Fischer’s successor in drummer Richard “Moon” Calhoun. This is not a story about this album however. Its about being in my town of birth-Waterville,Maine. And visiting a record store there with my boyfriend Scott called Record Connection. This record store is somewhat nationally famous so it seems. And between its full priced records and dollar bin vinyl,there is always something unique to be found at this place.

Whilst visiting there last time,I found a copy of Street Player on vinyl for 4 bucks. I had a CD copy but the cover had gone missing and I always loved the gate fold of the band playing B-ball. Upon getting the album out into my mom’s car,I found something very exciting. It was a press kit filled with official promo photos and information sheets. It revealed an amazing on the spot type history of Rufus,Chaka Khan and their musical position by the late 70’s. For Chaka’s birthday celebration,I’m going to post this material here to speak for itself in regard to the band,its perceptions and those of their record label.

Anatomy of THE Groove: “Razzamatazz” by Patti Austin

Harlem born Patti Austin actually had a couple unique musical careers before her 70’s and 80’s breakthroughs. She was singing at the Apollo by age 4,and had a recording contract with RCA a year later. After her career as a child star,she became a teen queen of the commercial jingles during the mid to late 60’s. During the 70’s she began her career as a backup singer for Franki Valli and The Four Seasons as well as Japanese fusion artist Yutaka’s debut album in 1978. By then,she’d already recorded two solo albums of her own in End Of The Rainbow and Havana Candy.

First time I ever heard of her was through her work with Quincy Jones in the late 70’s and early 8o’s.  Big examples would be songs like “Its The Falling Love” and “Baby,Come To Me” from 1979 and 81-duetting with Michael Jackson and James Ingram respectfully. Austin has a plaintive tone and elastic vocal range. This alternating voice makes her adept in jazz,funk and pop. One of the few versatile singers with a truly distinctive style to her that I know of. One of her shinning moments was on Quincy Jones 1981 album The Dude in 1981,where she sang frequently throughout. The name of the song is “Razzamatazz”.

Greg Phillinganes,Steve Lukather and Herbie Hancock start off the song with some viruosic electric piano/guitar interaction before Jerry Hey’s horn blasts get the song going. The refrain consists of Hancock’s electric piano,Lukather’s rhythm guitar and the drum/Moog bass of Rufus’s John Robinson and David Hawk Wolinski. On the choruses,Phillinganes adds his own melodic synthesizer touch. There are three different bridges here. One showcases the horns and Paulinho Da Costa’s percussion,the other reduces down to Phillinganes synth solo,and another is Lukather soloing over the refrain.

The song itself actually fades out on its second refrain. Patti Austin really gives her all on this song. This Rod Temperton composition is a very busy number,with a thick sophistifunk groove encompassing a number of powerful musical ideas. Especially its brittle,boogie funk juxtaposition of live horn arrangements,percussion and synth bass. On the second chorus,there’s an entire symphony of multi tracked Patti Austin’s singing the line “make it better with a little bit of razzamatazz”. Its a very melodic jazz/funk/post disco number whose energy level truly lives up to the exciting sound of its title.

Anatomy of THE Groove: “Tonight We Love” by Rufus

Rufus are extremely important to how funk music has translated into more recent years. As Questlove pointed out so well in his book  Mo Meta Blues while breaking down the 1977 album Ask Rufus, the bands fairly stripped down rhythm section based sound was a stylistic precursor to the neo soul sound of the early/late aughts. When guitarist Tony Maiden joined Rufus in 1974,he came a key focus of the band-often duetting with his voice and guitar with the bands iconic lead vocalist Chaka Khan. When Chaka left the band in the late 70’s to pursue a solo career,Rufus started recording albums without her.

The second of these post-Chaka Khan Rufus albums was 1981’s Party ‘Til You’re Broke. On this album the main instrumental,songwriting and vocal focuses shifted directly to Tony and the bands late 70’s keyboardist David “Hawk” Wolinksi. It was yet another album that music literature of my adolescence instructed readers to avoid. Ended up finding a vinyl copy at a small record shop in NYC while visiting my aunt. More recently I picked up a Japanese import CD of it. Still it really stopped me in my tracks to throw this vinyl on my aunt’s old turntable and be blown away RIGHT away with “Tonight We Love”.

On the choruses of the song,the main melodic statement turns to beginning theme of the song afer the main synth bass/drum intro-with Hey’s horn charts playing direct call and response to the vocal hook. There’s a second refrain after the second play of the chorus-this one in a more major key and featuring Hey’s woodwinds for the melodic statement. After a huge horn fanfare and drum roll,the song strips down to the drums again with Louis Johnson throwing down an ultra funky slap bass solo. After this-the song essentially reboots itself for another round of refrains/choruses before the groove fades out.

“Tonight We Love” is simply an amazing song. I’d personally put it up there as the finest funk Rufus made after Chaka Khan went solo. The late Louis Johnson almost acts as an official member of Rufus hear-his slap bass as much the star of the show as Tony’s many different guitar licks and Hawk’s many keyboard parts. This is a very Westlake studio oriented boogie/post disco type production-very well played on and produced. All the same,the funk kicks extremely hard in that classic “rufusized” sort of way. With the driving synths,guitar,drums and bass this is some serious early 80’s hard funk.