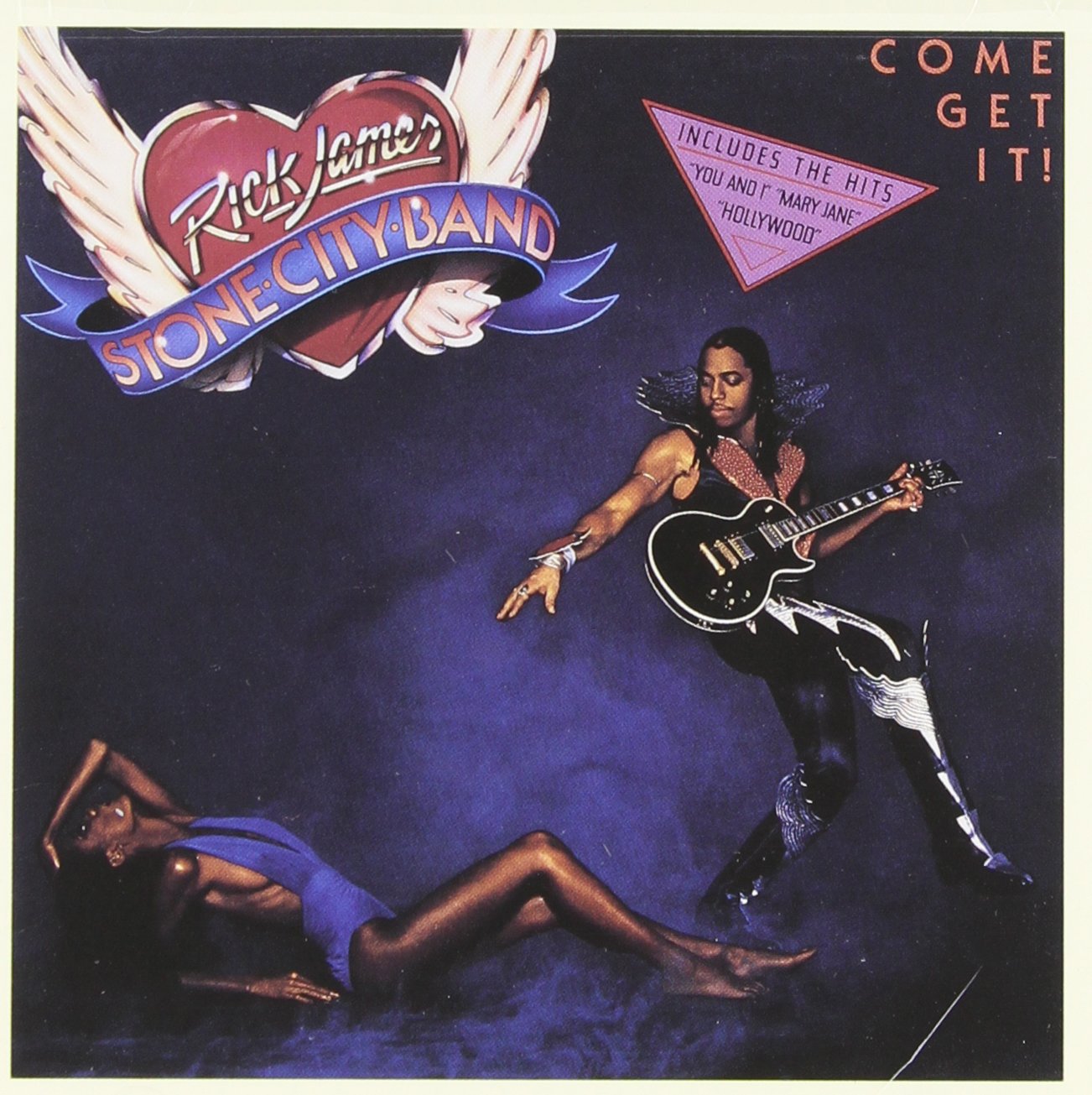 Rick James always seemed destined to have a career at Motown.  From his work with the Myna Birds to being a member of the staff writing there. He had spent much of the 70’s a musical gypsy-recording a few records and performing with a few different rock bands during the decade before decamping back to Buffalo and forming the Stone City Band. He then returned to the record label that had seemed to provide a strong sense of security for him as an artist/band leader in 1977. And they dropped this debut album the following April of 1978.

“Stone City Band,Hi” opens the album with a live recording that adds a strong P-Funk horn based hump to it. “You And I” starts off with a rhythm guitar groove that swings into a full blown orchestrated female vocal gospel/disco chorus before going into a 7+ clavinet driven fast funk groove with some harmonically fluid jazz guitar accents by final refrains. “Sexy Lady” deals with a polished and precise jazz-funk number with a strong West Coast vibe about it. “Dream Maker” hearkens back to Rick’s doo-wop days with it’s spoken intro and piano based soul ballad shuffle.

“Be My Lady” is another melodically bright mix of bass/guitar/horn oriented funk with the disco beat and “woo hoo” chants. “Mary Jane” begins with an arena style guitar thump and orchestral synthesizer before going into a stripped down jazzy soul-pop ballad with a lyric that could be taken (in it’s time) in two different ways. “Hollywood” starts out as a tender ballad about Rick saying goodbye to his family, while leaving behind the ghetto environment he feels might destroy him, before ending on a reggae style coda. The album concludes with a reprise of the title song.

When I first got this album on vinyl, I remember not caring for it too much. Hearing it fresh today on CD helps me realize what a strong debut this really is. The steely punk funk sound Rick James would develop isn’t as evident on this album. He’s very much a live band styled funk/soul brother on this album-with little concern for crossover anymore than doing so on his own musical terms. Stone City Band were a strong outfit too-with a big band funk style that can switch years between monster humps and lush disco friendly sounds. An excellent debut from an artist and band still getting their legs.

“Nina” and “Miles Ahead” – Flawed but fascinating – Improvisations

After recently seeing Cynthia Mort’s “Nina” a few weeks in advance of viewing Don Cheadle’s “Miles Ahead,” both seem to me flawed but fascinating. Each has a magnetic lead performance, neither attempts to provide the kind of substantive portrait that a documentarian would seek, and depending on your agenda, you can find them satisfactory, decent or atrocities. That there have been folks who’ve devoted lots of words and space while differing in their assessments is another indicator of just how difficult the whole biopic field has become.

Mort’s “Nina” was embroiled in controversy almost from the beginning, in large part due to the casting of A-list actress Zoe Saldana to portray the dynamic, often controversial NIna Simone. Charges of “colorism” were launched, and those cries became even louder when word surfaced about the alleged use of skin darkening makeup and a fake nose to enhance the facial contrast between Saldana and Simone. Add the presence of another international star in David Oyewolo to portray her manager Clifton Henderson, and many critics branded this little more than stunt casting designed to get Hollywood backing and major market circulation.

Mort’s response did validate, to a degree, the casting charges. She acknowledged that there were others considered for the role (though she wouldn’t list their names) and also said Saldana initially turned down the part, returning only because she truly wanted the film made. But the bottom line on “Nina” is that it is a far better film than some claimed. Saldana does a marvelous job of communicating Simone’s very complicated, mercurial personality, though it only skims the surface as far as truly documenting her artistic versatility. However it does spotlight her integrity and determination to do the music she cared about rather than what would be the most commercial, and it also highlights a fierce dignity, cultural awareness and solidarity that were unquestionably at the core of her music.

What “Nina” isn’t, and this is the implicit weakness in any biopic, is an exhaustive cinematic summation of Simone’s career, a breakdown of what made her unique and distinctive as a stylist, or a thorough recitation of all her career highlights. Folks who look to Hollywood productions for that kind of detail will always be disappointed, and “Nina” is no different. It has to condense and take shortcuts, and sometimes the juggling of exact and reworked for creative impact details tend to blur to the point that no one should take for granted that everything they see her actually happened. Netflix’s Oscar-nominated Simone documentary would be the place to go for those who want a comprehensive look at Nina Simone. As a work of dramatic intensity with some biographical elements, “Nina” succeeds despite its weaknesses.

If the evaluation is based wholly on acting skill and storytelling impact, then Cheadle’s “Miles Ahead” also can be deemed a success. It was understandable that with a career as majestic, extensive and varied as Miles Davis, no biopic that was only in the two-three hour range could fully do it justice. Plus Cheadle announced from the very beginning he had no desire to even attempt some kind of career-spanning epic. So, despite learning to play the trumpet to ensure accuracy, Cheadle instead opted for a work that focused on Miles Davis off the bandstand, while still giving you glimpses of what made him such a star on it.

You do see in the various “gangster” episodes of Miles Davis the things that also came through in his music. These include an adventurous spirit, a desire to never do what’s expected, a character who could be obsessively selfish one minute and remarkably kind the next, and someone who never felt they were treated the way that they should have been by those in positions of power, whether they be music executives or police officers.

As a lifelong Miles Davis fan and someone well versed in his various adventures, musical and otherwise, Cheadle’s portrayal was quite credible in many ways. But where “Miles Ahead” didn’t quite click was in communicating the greatness of his music, which since it didn’t set out to do that anyhow, is probably an unfair criticism. Only in the jam session portion at the end does some of the wonderful energy and vitality that was in all Miles’ great music come across on screen, and then it’s as much due to the assembled group as to anything else coming from the film.

The standard Hollywood biopic will never really satisfy the hardcore music fan, because they are about exaggerated personality and dramatic conflict first and foremost. Even those that do come close to also revealing what made the central character so important like “Ray” or “Get On Up” still have to focus more on things that will hook audience members who are casual listeners or in many instances totally unfamiliar with the music of the person being profiled, especially if we’re talking about non-rock or pop musicians. It is unrealistic at this point to expect the sort of adherence to fact and concern about technique and artistic evolution in a Hollywood biopic that you’d routinely demand from something on even the History Channel, let alone a stand-alone documentary.

Thus, in terms of the job that they were required to fufill, both “Nina” and “Miles Ahead” are basically serviceable works considerably elevated by outstanding lead performances, and augmented with some scenes from key moments in both performers’ lives that everyone should know. Given the general state of 21st century cinema, that qualifies as the best one can expect when commercial studios are in charge of any production.