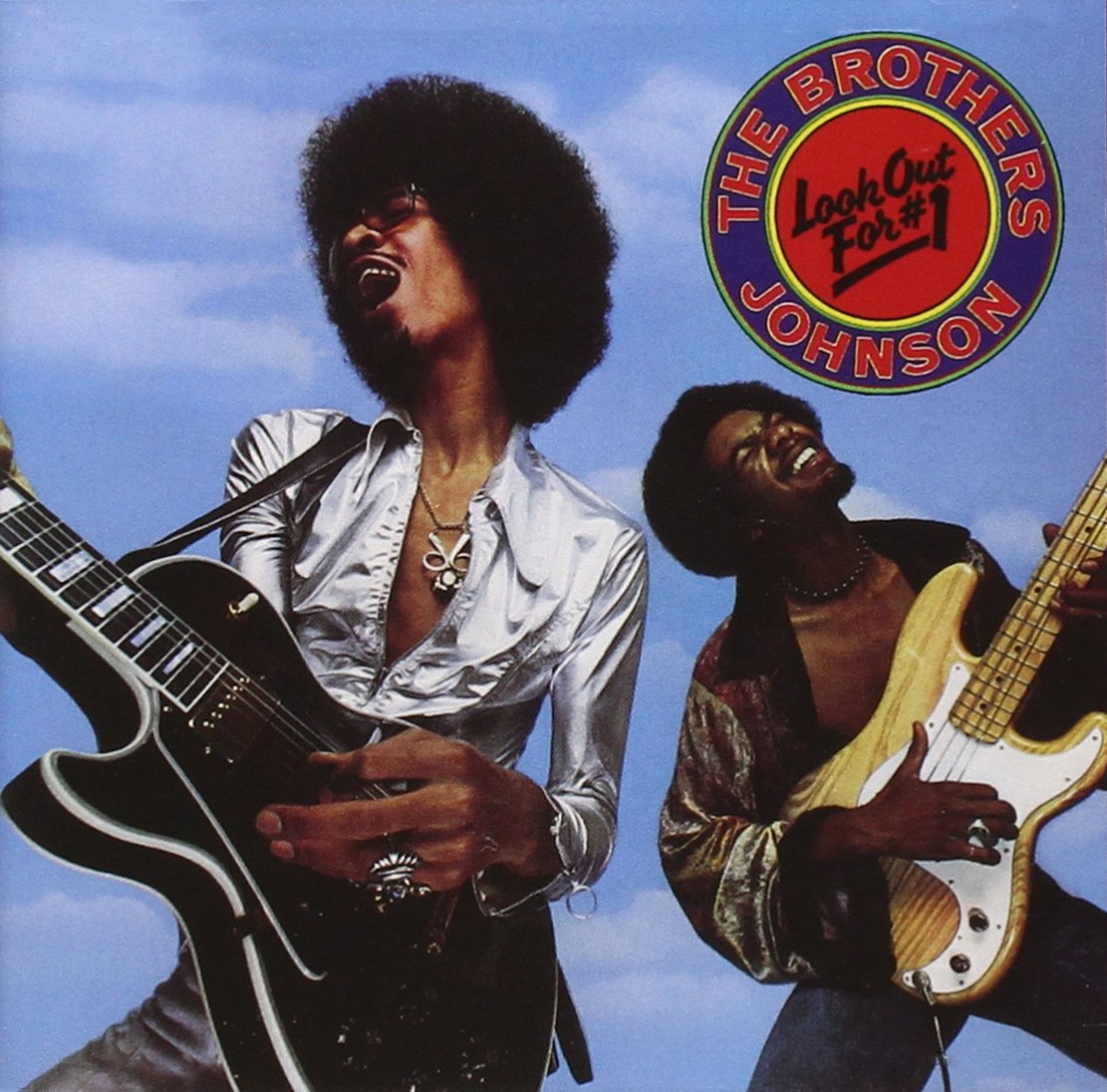 Somehow it never occurred to me that the Brothers Johnson’s debut album Look Out For#1 was celebrating its 40th anniversary. Sadly,it did so without the presence of the late great Louis Johnson-who passed away in the spring of 2015. One of the most important things to say about this album,released on new years day of 1976,is that it represents the very peak of #1 funk-a time when the music was at its strongest in terms of crossover. It was also Quincy Jones’ first major funk/soul production for another artist. Which in turn paved the way for Quincy’s success in that arena in the early 80’s.

George and Louis Johnson started playing professionally with Billy Preston as teenagers. As they approached adulthood,the guitar/bass duo backed up Quincy Jones on his 1975 album Mellow Madness. The setup was that the brothers wrote the songs,played the guitar and bass parts while George did the majority of the vocals with his high,percussive vocal stutter.  This was essentially the setup for Look Out For #1. Other prominent jazz/funk instrumentalists such as Dave Grusin,Ian Underwood,Lee Ritenour ,Billy Cobham,Toots Thielemans and Ernie Watts were among the musicians who played on the album as well.

One thing I’ve come to appreciate about this album is how it presents funk at its best recorded,produced and with its highest variety. “I’ll Be Good To You”,the primary single for the album,has a strong Sly & The Family Stone melodic singability. The instrumental “Tomorrow” has a similarly melodic vibe about it. Of course the song that gets the most harmonically advanced about that style is “Land Of Ladies”,the one song sung by Louis in his grunting,cooing vocal approach. Of course,after one goes from there Look Out For #1 is extremely dense with funk.

“Get The Funk Out Of My Face” is the most commercially successful example of this albums funkiness-with its fast tempo and processed wah wah effects. “Free And Single” and ‘Dancin’ And Prancin'”,with their heavy horn charts,take that same sound to the next logical step. A version of The Beatles “Come Together” and the closing “The Devil” are slow,gurgling deep funk that just grind the groove into the subconscious very deeply. The groove that pulls the sound of this entire album together in one song is titled for the brothers nicknames “Thunder Thumbs And Lightin’ Licks”.

There’s a deep point to this album that actually passed by even me,an avid funkateer,for sometime. A lot of times,even the most classic funk albums of this period mixed heavy funk in with jazz,rock or heavily arranged ballad material on an album. Even though this album has at least one slower ballad type number,the main priority of this album is on heavy uptempo funk. The immense talent of the Johnson brothers,as well as the instrumentalists playing with them,showcase how much the funk genre celebrates instrumental,melodic and rhythmic complication at its finest.

Conceptually,this album attracted me from the first time I saw the album cover on CD 20 years ago this year. It was a fish eye view from below,featuring the brothers playing their bass and guitar in front of a bright blue sky-both seemingly in the middle of singing. George is wearing a silver shirt and slacks with Louis has a silky,Indian looking shirt draped over him while in jeans. The whole image is that of just what they were-two super hip young brothers looking to play funky music for the people with enormous skill,style and flair. And that is what Look Out For#1 represents to me as it turns 40 years old.

Anatomy of THE Groove: “Say You Do” by Janet Jackson

Janet Jackson is turning 50 today. It’s amazing to think her music career is 34 years old now. She was groomed by her family to be an actress-doing Mae West impressions on the Jackson 5’s Las Vegas shows in the mid 70’s and staring on Norman Lear’s Good Times as Penny,an abused child adopted the Evans’ next door neighbor Willona Woods on the show. Just before Mothers Day this year,Janet announced she was 2 weeks pregnant with her first child by her husband of five years Wissam Al Mana. Would like to wish these expectant parents all the happiness in the world for this happy event.

Growing up Janet was actually interested in becoming a horse racing jockey or an entertainment lawyer- supporting herself through acting. By her early teens,she’d become committed to being an entertainer. With the help of her father Joe,she got a contract with A&M Records in 1982. The album had an incredible array of session musicians,songwriters and producers working with an appropriate sound for Janet’s still developing vocals. The album itself did chart in the R&B Top 10. But somehow never produced any hit singles. One big potential one was the opener “Say You Do”.

Starting out with a hard hitting 5 beat pattern on the snare drum,a thunder like sound allows a thumping bass line and a cosmic space funk synthesizer to ascend in sound and pitch into the refrain. After this,a liquid rhythm guitar protects the groove with several accenting keyboard patterns. One is a horn type Clavinet accent,the other is an orchestral Fender Rhodes-themselves accompanied by aggressive Chic-like bursts of disco era strings along with Jerry Hey’s horn arrangements. These work tightly in concert with those Chic style strings arranged by Benjamin Wright.

After several choruses and refrains of Janet’s vocals-featuring the singer accompanying herself with several layers of lead and back-round choruses,there’s a thick and funky drum/Clavinet/synth bass funky bridge before a symphonic chorus of Janet’s vocals comes in. Janet’s voice is elaborately echoed in a rather psychedelic manner-again accompanying herself with her lower and higher range over the 5 beat drumming.After this, that drum breaks off into the thunder sound that started the song concluding it-with the synthesizer that fades up into the intro fading out in the exact opposite manner.

When I first heard this album 20 years ago,it came as a total surprise that so much elaborate musicality would go into an unproven teenager singer-even if she did carry the famous Jackson name. For awhile now,almost no thought goes into the majority of teen singer/boy band/girl group style musical productions. With the entire focus being on the singer’s vocal persona and the songs hook. This Rene & Angela composition that starts out Janet’s debut album takes a totally different approach-much like an early 80’s update of the sound Norman Whitfield got for The Temptation on songs like “Masterpiece”.

The incredible instrumentalists on this song might have a lot to do with this sound. Rufus’s rhythm section Bobby Watson,Tony Maiden,John Robinson AND Andre Fischer are all over this groove. Not to mention James Jamerson Jr. coming in on bass too along jazz oriented keyboardists/synthesizer players  Jeff Lorber and Frank Zappa’s Ian Underwood. Janet’s teenage voice is very impressive on this song. Her maturing vocals not only scale from a low tenor to her high mezzo soprano by turns-along with the multi tracked and echo-plexed symphony of her voice added to the mix too.

Of course there’s also the influence of her brother Michael here too. Michael Jackson was one of the biggest personalities in the music world in 1982,and only about to get bigger on that level. Janet does her own versions of his vocal hiccups and range on this song for sure. But the idea of combining a tight rhythm section of strong session instrumentalists with the horn arrangements of Jerry Hey,also working with Quincy Jones and MJ at the time,showcased her influence from her brother was as much musical as it was from the performance standpoint of her presentation.

Musically this song also bridges two generations of funk as well. It has the elaborate arrangements of the cinematic soul sound of Isaac Hayes and Barry White that inaugurated the disco era. But the clipped,stripped down presentation of the rhythm section and spare bursts of strings and horns also fall in line with the new wave influenced Minneapolis sound of Prince. Which was one Janet would embrace more fully in the next several years. This sort of instrumental thoughtfulness and funkiness stands for me as a superb model for teen singers. And stands as a highly unsung debut song from Miss Janet!