James Brown-Live At The Apollo, Round Two On Record, At Nearly Half a Century 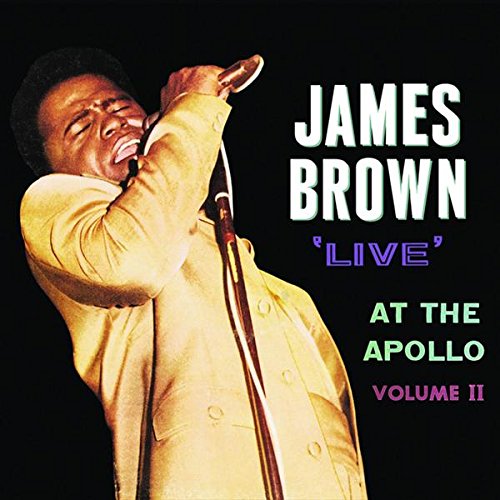 James Brown’s career had a major turning point during 1967-68. Musically speaking,h is songs were not only taking on a completely different character instrumentally. But in terms of format? He had gone from 3-4 minute doo-wop soul balladry to extended,horn based dance jams that were getting their rhythmic character from Latin boogaloo and African high life music. This, of course was known as funk. With the recent passing of John “Jabo” Starks, who played in tandem with the late Clyde Stubblefield during this period very heavily, it seemed a good time to discuss JB’s own funk process onstage.

The “funk process” was entering it’s peak for James Brown. As was his sociopolitical consciousness and activity. During the summer of love, and the emergence of Sly Stone and Jimi Hendrix, many black American’s in the early/mid 30’s even at the time were still very much in love with the suited up, processed haired JB. One who was a dramatic, gospel fueled soul balladeer. While his persona was still in the same place, James Brown’s second live recording at the Apollo would have to serve to illustrate the change in perception of his artistry.

The album begins with an introduction that goes into a faster tempo’d,heavy grooving version of “Think”, where James duets with the sassy Marva Whitney. “I Want To Be Around” and “That’s Life” are both ballad standards making strong use of orchestration and his Famous Flames. “Kansas City” is done at a very fast tempo and in a different key than I usually hear this sometimes over covered song played in. It is through “Let Yourself Go”,”There Was A Time” and “I Feel Alright” are an elongated,bass/guitar driven funky process all it’s on that leads to…”Cold Sweat” of course-his big record at the time.

After an equally furious tempo on “It May Be The Last Time” and a brief intro of “I Got You (I Feel Good)”, JB goes into an elongated version of “Prisoner Of Love”-similar in approach to “It’s A Man’s Man’s Man’s World” and “Lost Someone” later in the album. “Bring It Up” has another a very fast tempo similar to “Please Please Please”, which concludes the album. “”Try Me” meanwhile is done more traditionally.  I once heard this  album described as erratic it sounding- likely because it emphasized extended soul ballads rather than focusing on JB’s funk innovations of the late 60’s.
On the surface, there actually is some fact in that. Taking this album out of the literary context and back into the more human one? The fact these ballads are done in 7-10 minutes lengths is musically futurist for soul as well-anticipating the approach Barry White and Isaac Hayes would take several years later on conceptually thick studio albums with a similar style format. Likewise, the shorter uptempo numbers (which are often combined together here) anticipated the musical formats of the disco era medley’s that would show up within a decade from this albums release.
Also, this allowed more vocal oriented fans of James Brown to acclimate to the idea of extended runs. Also,when the funk is on fire here? It’s SERIOUSLY on fire-probably because it was performed as it was being innovated. Not to mention how these JB’s musical innovations were generally closely linked with his live performances. Combined with James’ grateful, appreciative and loving interaction with the audience? This is also JB’s key transitional moment as a performer-as he was further emphasizing the instrumental sound of the JB’s more then the vocal centered one of the Famous Flames.