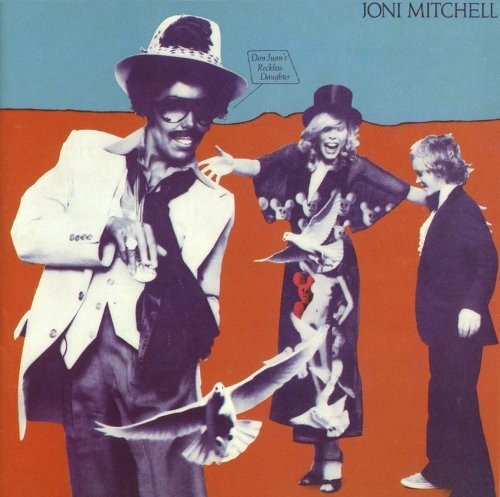 Joni Mitchell did something very special in the mid to late 1970’s. Something that impacted on me personally roughly 25 years later. She began to combine folk oriented singer/songwriter instrumentation with jazz chords and harmonies. Her approach at this evolved from working with Crusaders Joe Sample and Wilton Felder to fretless bass icon Jaco Pastorius-all between 1974 and 1974. In particularly on 1975’s The Hissing Of Summer Lawns,  Mitchell’s music was her own unique hybrid. Neither jazz or folk. This all came to a tremendous head with her 1977 release Don Juan’s Reckless Daughter.

It was an album where the cover art (as was typical done by Mitchell herself) drew me into its musical world. It depicts three images of herself. One seems to be a herself as a teenager. The other is a character she portrayed at a Halloween party named Art Nouveau. This was based on a black man she met who complimented her at that time. Mitchell describes her soul as “not being that of a white woman”.  And that she often writes from a black perspective. Embracing the jazz aestetic, from be bop style poetics to the music itself, all became a part of what made this 1977 double LP what it was.

The song “Cotton Avenue” starts the album with an overture, one where Mitchell is playing six differently tuned guitar tracks simultaneously. The song itself is a swinging number-heavily textured by Jaco’s atmospheric bass lines.  The faster “Talk To Me” and the slower “Jericho” both explore the approach of Mitchell’s guitar with Jaco’s bass-playing in an almost Salsa like rhythm on the former, and back to the jazzy swing on the latter. “Paprika Pains” is a 16+ minute cinematic number, showcasing Mitchell’s improvised piano with full jazz orchestration.

“Paprika Plains”‘s music also serves as the soundtrack to a first person description of a late night bar gathering of Canadian First Nations tribe’s people-poetically touching on matters of alcoholism and despair. “Otis & Marlena” is a fairly conventional country tinged folk number. Its based in the acoustic guitar. Its a character sketch of two people vacationing in Miami while “Muslims are sticking up Washington”. “The Tenth Worlds” is primarily the work of Puerto Rican percussionist Manolo Badrena, one which focuses only on his fluid Afro-Latin percussion and improvised vocal chants.

Weather Report member Alex Acuna joins in for “Dreamland”, my personal favorite number on this album.”Dreamland” merges an even broader (and somewhat slower) Salsa percussion sound with the highly hummable, Caribbean folk style melody of Mitchell’s. Chaka Khan provides a very tribal sounding back up vocalese right along with Mitchell’s on the song. The title song is somewhat similar to “Talk To Me” from earlier in the album-as well as “Coyote” from her previous album Heijra.  The more rocky “Off Night Backstreet” and the folk oriented “The Silky Veils Of Ardor” close out the album.

Don Juan’s Reckless Daughter represents the official birth of what could best be described as a Joni Mitchell sound. Its true that jazz always accommodated other musical styles into it. Mitchell wasn’t new at doing that. But she did manage to expand on the possibilities of jazz fusion at the same time as she did the same for her own songwriting style. That coalition of personal and overall creative intent would is likely a lot rarer a thing than it might seem. And just for creating a welcoming and enticing entry point into Joni Mitchell’s musical hybridizing makes this album one of her most iconic ones.

During the mid/late 80’s,Prince was refashioning the MPLS sound into something far beyond its stripped down drum machine/synth brass based new wave style groove it started out as being.His music was becoming far more orchestral and jazzier-showcasing a more live instrumental approach and more improvisational horn charts and solos. In 1986 however, Prince was still close enough to his signature sound to expand on it with some of his newer musical ideas. This came to fruition on the unreleased album Dream Factory,which evolved into Sign O The Times.

When I first started collecting Prince CD’s,Sign O The Times was on my bucket list of albums in terms of introductions to his music. It was actually the last on this list I ended up getting. It was a 2 CD set that I actually had to listen to several times in order to gauge what each song meant to me. Looking back on it now,the album has o conceptual unity as its cobbled together from several unreleased sessions. Yet all the songs sound like they belong together. One of a handful of album tracks that really stood out for me on this particular,the top of that list would be “The Ballad Of Dorothy Parker”.

A drum kick on the Linn LM-1 starts out the song. A steady Linn drum track,with a number of call and response Afro Latin percussion accents and claps,remains the main rhythm of the entire song-save for another drum kick before another refrain. The bass line is an intricate,snaky movement sewing the song together. Prince provides a number of unique synth leads here. One is a high,pitch bent one that sounds almost out of tune. The other is a similarly toned line if a bit lower-both improvising on the series of melodies throughout the song until it ends on the same theme on which it began.

Especially since this same man sang “its time for jazz to die” in 1982,this song shows how much Prince had integrated jazz improvisation and Latin drum patterns into his one man band approach by the mid 80’s. Some of the unusual,improvised modulations of the synthesizers on this sound have a similarity to Joni Mitchell’s music,of which Prince was a major fan growing up. He even name drops her as an element in the story told by the lyrics-a rye musing on Prince being played by a cocktail waitress. In terms of his multi instrumental jazz/funk approach,this is among my very favorite Prince songs.

Anatomy of THE Groove: “Judas” by Esperanza Spalding

Esperanza Spalding has always celebrated the ebb and flow of jazz in her career arc thus far. Being a bassist and therefore rhythm player,she’s adapted herself into a number of different tributaries of jazz. From small chamber groups,to vocal to funk. On the latter end her Radio Music Society album of five years ago dovetailed nicely into her work with Janelle Monae a year later on their collaborative song “Dorothy Dandridge Eyes”. There is one concept that Spalding has been evolving over the last few years. It’s based on her understanding of the 60’s super group Cream consisting of jazz oriented members in Jack Bruce and the late Ginger Baker. And that’s her adapting her sound to a rock power trio.

That trio consists of guitarist Matthew Stevens,whose played with Christian Scott and on Harvey Mason’s newest album along with drummers Justin Tyson and Karriem Riggins-the latter of whom is also a DJ whose played for Erykah Badu and with Slum Village.  Their brand new album is titled for an alter ego (Spalding’s middle name) called Emily’s D+Evolution.  She describes this concept as dealing with a modern mind afflicted by a primal urge. And how great strides in creative development could be inspired from a less enlightened version of oneself. As applied to the music of Spalding’s new album, only one track with a groove that impacted strongly on me. And it is called “Judas”.

The song begins with the peddling swinging drum rhythm with Spalding scaling up and down on her electric bass. After that the high pitched electric/acoustic guitar comes in to accent the songs constantly scaling and complex chordal structure. The song itself is very chorus heavy-with the Afro-Latin rhythm breaks of the percussive,hi hat heavy drumming being the consistent element in a song where the main melodic change is from the major chords of the chorus to the more minor chords of the refrains. After each repeat,the calmer riff that opens the song repeats itself before the next set of choral refrains until Spaldings vocals and the hi hat cycle out of the song itself.

Because this song is stripped down with a vocal melody based around the chords of the rhythm section, this song has a similar musical technique to the be-bop styled singer/songwriter folk-pop of Joni Mitchell’s late 70’s work. Instrumentally the trio she’s playing with project a strong jazzy fluidity here. Having streamed this album early on,I was quite unimpressed with what came across as raggedy alternative rock instrumentation that seemed to get in the way of Spalding’s complex songwriting on the majority of the album. But the combination of the boppish Latin rhythms makes this one song stand out as both jazzy and funky.

About the “Emily” concept itself  it’s effects on this song,Esperanza herself describes this musical character as someone she does not yet know fully. She’s been touring for a year or so now with what’s known as the ACS trio-also consisting of Geri Allen and Terri Lyne Carrington with the songs from this album.Lyrically the song “Judas” comes across as the childhood dreams that inspired Spalding for this musical act. If I were to try to break it down,the lyrics to this song seem to be about just making it in a complex world. And it’s described more in terms of stream of conscious actions than realistic events. So the music and lyrics of this song really look to providing Spalding clarity for her new concept.

Much in the same manner as Prince and Joni Mitchell had? Teena Marie elected to follow up her huge commercial breakthrough of 1984’s Starchild by satisfying her’s and the people’s urges for a broader level of musical expression. Understanding the instrumental continuity through jazz,soul and funk already was certainly a help in doing this. But especially in the mid 80’s? It was still a nervy move for a female artist with Lady T’s level of creative control/input. The result of this was her 1986 album Emerald City.

As with her Epic label debut four years earlier? It was a concept album. But this time with a more richly picturesque Wizard Of Oz type setting. Only with a more racially aware sociopolitical subtext-the story of a girl named Pity who decided more than anything she wanted to be green,as the liner notes state. As an album? It isn’t particularly long on the funkier grooves of her earlier albums. But when that does pop up? It does so with dramatic abandon. The finest example I can think of here is the title song which opens up the album.

An orchestral polyphonic synthesizer opens the door to the kinetic,fast paced Afro-Cuban percussion that pulses in and out of the stop/start tempo throughout the song. On each of the instrumental refrains? A bell like keyboard plays a very Japanese industrial electronica style melody alongside very slick synth bass lines. None other than Bootsy Collins himself provides one of his rapped vocal intros to the proceedings. On the second refrain of the song? A hard rocking guitar solo is even referenced lyrically before the rhythmic intensity continues it’s own end.

By embracing instrumental elements of Afro-Funk and Asian styles of industrial electronica? This particular song reminds me a lot of the pan ethnic “neo geo” style of electro dance/funk being pioneered at this time by former Yellow Magic Orchestra member Ryuichi Sakamoto. It is wonderful to see how Teena Marie took a very different route from the stereotypical blue eyed soul/funk,which often looks to the music’s past approach,and took a more genuinely futurist view of it. Again it’s an example of her understanding of black American music’s continued evolution in her own creative context.