Tag Archives: Life Is A Song Worth Singing

78 On The Longplay: ‘Life Is A Song Worth Singing’ by Teddy Pendergrass 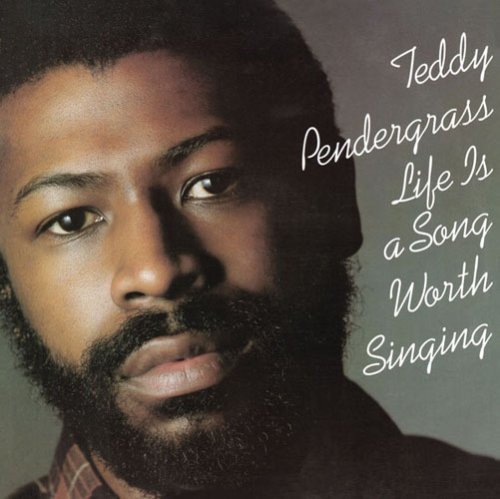 Teddy Pendergrass, at least for his part, wasn’t keen on the notion that he’d be a contributor to the notion that there was a shortage of high quality music in 1978. Life Is A Song Worth Singing stands out as a strong example to the contrary. As potent as the Philly sound was in the 70’s, there were signs in the middle of the decade that there was a need to adapt the style in order to accommodate changes in the R&B/soul/funk world of music. Gamble & Huff already had been doing that as far back their second album with The Jacksons’ Goin’ Places.

Gamble & Huff were taking basic Philly orchestral soul/funk/disco sound, and swinging it just a bit harder driving. Where orchestration was a major part of the whole on Teddy’s debut, this album takes a different approach already with the first two cuts-including the title song and “Only You”. The strings take a strong backseat whereas the horns are upped in the mix. And the slower beats and rhythms are channeled into the same forward thinking musical approach. All with a strong use of rhythmic style electronics and keyboard textures while still being very recognizably the Philly Sound.

The title track not only showcases this production style to a strong degree, but has an excellent message about taking the time to find an inner strength (and hope in yourself) in times of crisis. It’s a message of self determination that Teddy is channeling directly from what James Brown,Sam Cooke and Curtis Mayfield did before him and extended into the disco/funk era pretty much uncut. And I also have to thank Gamble & Huff for keeping that going too. “Cold, Cold World” offers another message of hope on a great mid-tempo tune that looks to the same new direction as the faster tempo beginnings.

The new direction of “Cold, Cold World” is a modernistic sweet funk type of sound- given a toughness largely due to Teddy’s dynamics and that of the arrangement. The classic “Close The Door” and “When Somebody Loves You Back” offer up similar concepts right where one needs them. “Get Up,Get Down,Get Funky,Get Loose” is definitely a classic “Philly Jump” kind of tune and an example of the most positive direction disco was going at this time..  Now “It Don’t Hurt Now” is the slowest song here however it extends on the overall positively affirming and genuine good intentions of these songs messages.

As with its predecessor Life Is A Song Worth Singing makes you think, makes you happy and is romantically and creatively satisfying at the same time. And that makes it yet another example of an album that avoids the sophomore slump syndrome  It’s also a prime example of what made Teddy Pendergrass such a great voice and artist. And on this album, Teddy also represented what writer Rickey Vincent referred to as the black male soul singer as a symbol of strength and pride. This makes Life Is A Song Worth Singing one of Teddy’s definitive albums.