88 On The Longplay: ‘Stronger Than Pride’ by Sade 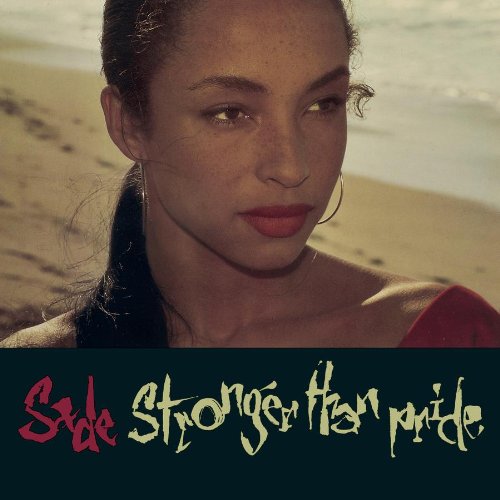 Sade’s first two albums Diamond Life and Promise were both enormous successes. Their respective hits being all over the place-that former album even ending up represented on a breakfast cereal premium sticker I had growing up. It was hard to believe that the band themselves-including the regal beauty of their lead singer Sade Adu herself, were very much unlike most hit musicians of their time period. They were straight out of the same UK jazz/funk scene that had spawned Loose Ends, Incognito, Level 42 and Spandau Ballet.

Despite succeeding on a level that perhaps exceeded the best that any of their contemporaries did, Sade always kept themselves just a little bit behind their own public face. Which was almost totally related to their music. And their music videos with a strong cinematic scope and stylish live performances. They had always possessed a very distinctive quality about their music-almost to the point where they deserved a genre all their own. When this third album, and final of their first decade, arrived in 1988 I have vivid memories of Sade albums somehow being an event.

Over the years I’ve actually had to do much growing into this album-somewhat like a pair of shoes that were just a tad too big for me. “Love Is Stronger Than Pride” itself is nothing like any Sade song I’d ever heard up to that point. There is a wide, empty void in the middle of the songs rhythm-extremely subtle percussion with only a stronger little heartbeat on the choruses. With its atmospheric,ethereal keyboards and sustaining melody it very much encompasses the feeling of a humid, sensuous encounter. Maybe even a mildly distant one at that.

Of course the rhythm is entirely absent from “I Never Thought I’d See The Day”,which flows right along with its moody melody as far as it can take it. “Paradise”,”Nothing Can Come Between Us”,”Keep Looking” and the closing instrumental “Siempre Hay Esperanza” all embody this grooving, heavily stripped down funk sound that has since become most strongly associated with Sade. They are filled with heavy percussion and some of the fattest and locked down bass lines Paul S. Denman has ever thrown down. And he’s thrown down many.

“Turn My Back On You” is a particular favorite of mine-built on a strong,subtle variation of the James Brown-like bass/guitar interaction following each vocal and instrumental chorus. “Haunt Me” is a pretty Flamenco flavored Spanish guitar ballad while “Clean Heart” takes a jazzier pop mid tempo ballad cue-a bit like a more stripped bare variation of some of the music on their debut. When I first heard this album? I didn’t really understand it. Though relatively intelligent by the age of 8, this album contains more adult oriented outlooks on romance. And melodies that were somewhat harder to hum.

During my earliest years of adulthood, I rediscovered this album By that time of course having absorbed a lot of Prince, Crusaders, Miles Davis and an entire myriad of jazz/Afro/Funk hybrids. So one day I found this album on CD,with my father having had the cassette for years and listened to it-as some point near or around the summer of 2003. All of a sudden this album leaped out at me in a way that it never had before. While present this album doesn’t focus in on the horns and piano as much as the first two Sade albums.

The entire album is very much oriented around a very spare type of funk. It was a groove which emphasized Sade’s singing as well as bringing the bass/guitar accents more out front. What I didn’t realize at the time was this Sade were laying the groundwork for all the music they’ve since created on this particular. And for the most part? That hasn’t been a bad thing at all. So in the context of where this took Sade rather than in comparison to what came before,this album is a resounding,romantic and hard grooving success.