Bootsy? Player Of The Year At Just Over 40 Years Old! 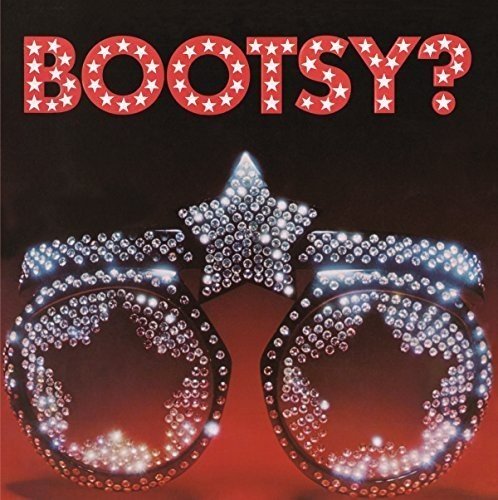 Bootsy Collins’ career as a band leader started around 1971 when he and his brother Phelps “Catfish” Collins put together The House Guests in Cincinnati. And after five years of being folded into George Clinton’s P-Funk collective of Funkalelic and Parliament. In 1976, Bootsy merged some of those former House Guests with other members of P-Funk to form The Rubber Band. From the very beginning, the venture revolved around Bootsy and his stage persona. So he and the Rubber Band’s cartoon like concept attracted a younger audience into enjoying P-Funk.

By1978 , the P-Funk juggernaut was at it’s prime. It had spin off acts flying all over the place. And has a loyal fan base keeping a vested interest. On this album we start out with Bootsy declaring “what’s the name of your town?” on..”Bootsy’s What’s The Name Of This Town”, a frantically quick tempo’d stew of bass/drum rhythm with call and response vocal exchanges. It’s flat out hyper-energized funk. “May The Force Be With You” is a great example of ballad paced funk-with Bootsy’s thick bass pops and the choral vocals illustrating a sexually charged Star Wars metaphor.

The trill falsetto voiced Gary Mudbone Cooper (in contrast with the quirky sighs of Robert “P-Nut” Johnson) takes the lead on the the rather soul/reggae oriented love song of “Very Yes”-cooing in a comically alluring yet sensuous manner. This all continues with “Bootzilla” which, along with “Roto-Rooter” both meld rhythmically exciting,full band funk-thick with orchestral synthesizers and a Bootsy’s explosive instrumental presence. “Hollywood Squares” is a slower crawling, foot stomping  P-Funk number.  These songs embrace that classic P-Funk embrace of satirizing American advertising slogans.

This form of satire comes right from the black DJ tradition. And late 70’s P-Funk expanded on them to promote their own musical concept. “I Love You” features P-Nut and Mudbone again on a more fluid,very jazzy oriented slow groove ballad with strong psychedelic undertones. This album represents Bootsy’s Rubber Band right in it’s musical prime. The energy level,even on the slower songs,is just infectious. And considering P-Funk’s relatively nil commercial reception in the long term scope of things? One doesn’t require the charts for success because as Bootsy might say? The proof is in the footing. 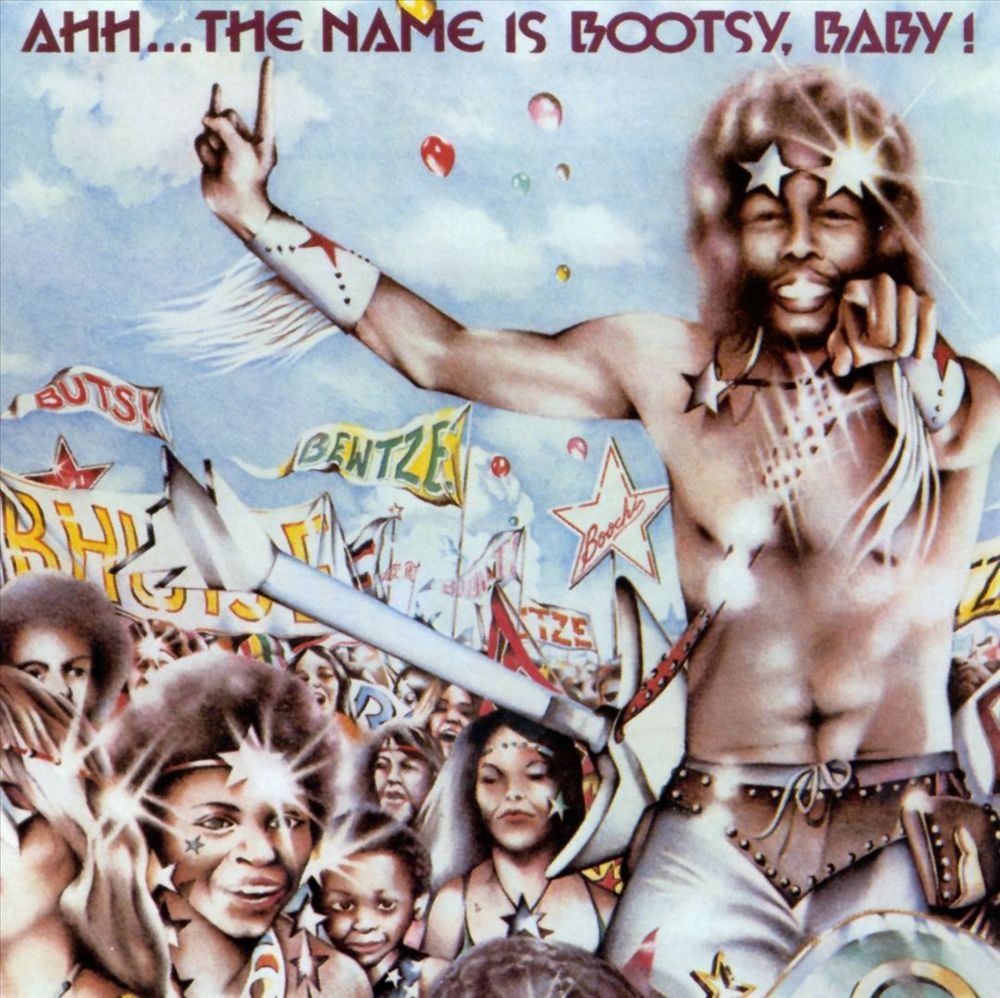 When P-Funk first began to enter my life 22-24 years ago,Bootsy Collins was the first part of the outfit that really got my attention as an individual musician. As most of you reading this blog for some time know,have always been a big admirer of the bass and bass players. Which is awkward because as long as I can remember,hearing bass lines in songs isn’t always easy for me. True,most music listeners may be trained not to hear it. But still to this day,have trouble personally hearing the instrument in a busy instrumental mix. Bootsy has been refreshing for me in his pioneering of  a “bass in your face” style.

His 1977 album Ahh…The Name Is Bootsy,Baby! is a superb example of this. It was recorded with his Rubber Band,his own personal adjunct of the P-Funk musical army. In addition to P-Funk mainstays such as Bernie Worrell,his brother Catfish,Mike Hampton,Glenn Goins and Jerome Brailey,it also featured drummer Frankie “Cash” Waddy and vocalists Gary Cooper and Robert Johnson. The album itself is divided into separately themed halves. The first is uptempo and funk based,while the second is ballad oriented. On vinyl,those themes were divided in a “two sides of Bootsy” approach as it were.

The title song that begins the first side is the first Rubber Band song I ever heard,though originally as the first song on the Bootsy compilation CD Back In The Day. For the most part,the most prominent element is the deep,pounding Moog bass accentuated by  Fred Wesley and Maceo Parker’s horns. The song itself is a musically fictive meet and greet between Bootsy with his younger fan base known as “geepies” asking him questions about his general sense of funkiness. As jazz critic Gary Giddins said of Louis Armstrong,only the great musicians get their own theme song. And this one is certainly that for Bootsy.

“The Pinocchio Theory”,powered by a heavy wah-wah/horn interaction and “Rubber Duckie” are both two more superb examples of Bootsy’s funk style. Both are rhythmically and melodically flamboyant at the same time. All with a joyous sound played to draw people to the funk,and never to play over their heads. The invocation of preteen based pop culture elements,used similarly to George Clinton’s social satire,is well catered to Bootsy’s somewhat younger target audience. “The Pinocchio Theory” is also the origin point of one of P-Funk’s most famous quotes: “don’t fake the funk or your nose’ll grow”.

Interestingly enough,at my first time hearing this,it was still at a time when I skipped over ballads on funk albums generally. So am only hearing these as perhaps the most musically important aspect of this album. With funk,suppose one expects the rhythm to be strong and upfront. Much as with Larry Graham’s ballad approach,slow soul ballads such as “What’s A Telephone Bill?” and the more mid tempo shuffle of “Can’t Stay Away” are turned into funk ballads because of Bootsy’s hefty,quaking “duck face bass” (as I call it) that punctuates every melodic line of both songs.

The album is book ended in the middle and end by interludes such as “Preview Side Too” and a reprise of the title song. The later revisits the part of that song where Bootsy and Catfish play a Jimi Hendrix style revisit of the melody for “Auld Lang Syne “-seeming to express the album coming out early in the year-as well as a new generation of funk getting started. The former as well as “Munchies For Your Love” express far sleeker variation of Funkadelic’s earlier psychedelic rock ventures-only in a slower and more minor chorded jazzy sort of instrumental framework.

This represents one of a serious of albums where,on every song,some element of the bass instrumental sound is upfront and personal on every song.  Before funk emerged as a genre,bass players were not taken very seriously in any popular genre of music. Because it brought rhythm upfront,bassists became vital in funk from the get go. Through his time with James Brown onto George Clinton,Bootsy emerged as funk’s leading bass superstar in the late 70’s. And as this album has turned 40 a week ago now,the idea of the “bass hero” might be Bootsy’s most enduring legacies this album in particular has left on music.