There’s No Place Like America Today: Reflections Into This 1975 Curtis Mayfield Album On Independence Day 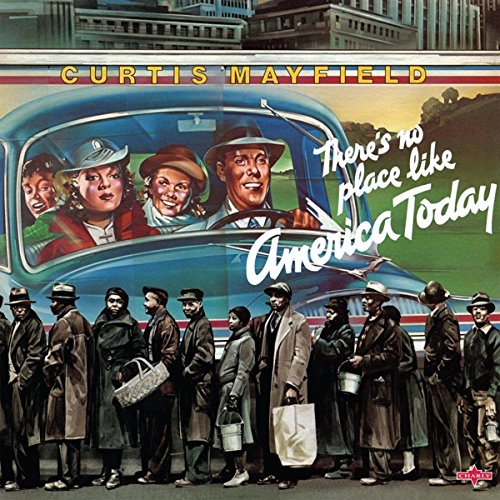 Curtis Mayfield’s message to America’s black community is a hard one to overstate. As Jerry Butler stated, Mayfield witness the financial exploitation of many an (often illiterate) blues musician in Chicago as he was coming up in the world. He arrived into Record Row in the late 50’s as a teenager-witnessing these “musical sharecroppers” (as Butler referred to it as) basically having to “sing for their supper” by gigging just to earn a living. As the 60’s came in, Curtis Mayfield became one of the first black American musical figures to change that for himself. And as an example for others to come.

Half a century later, America is still in many ways a developing nation. Its still an autocratic nation in many ways. With many marginalized people remaining so in a nation that should have plenty for all of them. For thoughtful people such as myself,this might make Independence Day difficult to celebrate these days. In 1975, Curtis Mayfield released There’s No Place Like America Today-an album that addressed such concerns.  Its cover art is based on a photograph of black flood victims in 1937 by Margaret Bourke-White. Here’s my review from a couple of years ago about the album.

From what I’ve heard of the man from the beginning of his solo career onward? Curtis Mayfield’s music focused on sociopolitical matters from the point of view of a storyteller. He’d basically tell the tale in his poetically strong manner, and than make either make passing observations or ask a rhetorical question. Always with the idea of setting things up for positive change.

After the events of Watergate and the ensuing oil crisis in the mid 70’s? Curtis’s thematic focus was beginning to change from one of implied optimism to one of the need to face the harsher realities head on, and as they were. From the cover artwork re-imagine a famous photograph onward? This album exemplified the change of focus in Curtis’s music.

“Billy Jack” is a thick,boiling over the edge yet spare jam defined by melodic wah wah bass-with a crying blues guitar backing it up and carried along rhythmically by conga’s and other percussive elements. “When Seasons Change” keeps the that same sound fully intact with a lot more reverb on this very hollow around the middle,but still beautifully crafted hard funk ballad.

“So In Love” brings in the close horns,organ and pretty orchestral strings for a shuffling mid tempo soul ballad. “Jesus” throws down a tick tocking drum with a high liquid bass and yet more organ for a gospel/soul ballad. “Blue Monday People” is another mid-tempo ballad full of that round,reverbed wah wah sound along with the typically powerful melody.

“Hard Times” brings all the elements of the opener for a hard funk number with a strong blues flavor while “Love To The People” brings in both this heavy echoed rhythm section with the orchestration together for a swelling,horn filled mass of funky soulfulness. Over and over again? This album brings in a spare,very glossy funk sound that stands on near perfect ground with the lyrical focus. And of course it finds Curtis taking a look at the darker side of his one conceptual vision.

He is seeing the inequities of racial privilege for exactly what they are. And makes it clear over and over that the black community will have to turn more and more inward to move forward. And that stands on both creative and social grounds as well. Of course with musicians like Phil Upchurch and Henry Gibson as part of Curtom’s backing band of the day? Curtis Mayfield was in just the right place to take his funk to a musically broader and lyrically less certain place.

The idea that America should celebrate its birthday based on unconditionally positive ideas is probably a destructive one. Every year as knowledge becomes broader, American’s learn not only truths of its history. But the less than savory circumstances on its founding. Yet America is also a nation where its democratically based…messiness (as my friend Henrique said once) allows for a lot of positive things to be accomplished.  There’s No Place Like America Today takes this well rounded view of outward and inner human politics and brings it all to the table. And in Curtis’s own funky eloquence too.

Anatomy of THE Groove: “Nature Boy” by George Benson (1977)-Vocal

George Benson’s vocal style always reminded me a great deal of a higher pitched Donny Hathaway,with just a touch of Stevie Wonder’s melisma for good measure. His vocal tone had such a general strumming quality,his technique of scatting with his guitar became a signature technique. So it was no surprise for me to find out that Benson was in fact someone who knew personally. And they had a musical connection with Phil Upchurch as Benson later covered Hathaway’s “The Ghetto”. Also important is that Benson had always sang AND played throughout his career-long before his 70’s commercial peak. So he is very accessible to appreciate on a purely vocal level as well as instrumental.

In 1976 Benson had a humongous bit of luck with his album Breezin’-produced by Tommy Lipuma and featuring the Bobby Womack penned title hit and his iconic cover of the Leon Russell ballad “This Masquerade”. Also being his debut for Warner Bros. records,Benson was now firmly positioned as a singer/musician who’d have a strong ear as an interpreter. Especially with his back round as a viruosic jazz guitar improviser. His second Warner Bros. release came out in 1977 and was called In Flight. It featured the same lineup of musicians as it predecessor. My personal favorite song from this album is a version of the Nat King Cole standard “Nature Boy”.

Cinematic strings sweep through the beginning of the song. These strings literally segue into Harvey Mason’s drums clipping along at roughly 96 bpm along with Stanley Banks’s two note popping bass,while Jorge Dalto’s Clavinet drives right in the groove along with it. Ralph McDonald’s percussion takes that rhythmic stroll along the way as Ronnie Foster’s electric piano plays along with bell like beauty. This basic groove is the musical atmosphere of the entire song-with the strings moving to the forefront for every other chorus. Benson’s lead vocal carries the first half of the song. On the final minute or two, the melodic focus is on Benson’s guitar/scatting hybrid technique he is so well known for.

When I first heard this,I had no idea Nat Cole wrote  it. Benson sings the original melody very faithfully. At the same time,his timing along with the slow crawling, percussive romantic funk called to mind Marvin Gaye’s musical sound of the same period. Gaye had already done a version of this song in 1965. His interpretation was very close to the original. What Benson bought to the song vocally was not only a more modern gospel/soul flavor,but also that more contemporary Brazilian style jazz/funk instrumental atmosphere. It did an excellent job showcasing the evolution of black American music and to me represents an important milestone for George Benson the singer.