78 On The Longplay: ‘All Fly Home’ by Al Jarreau 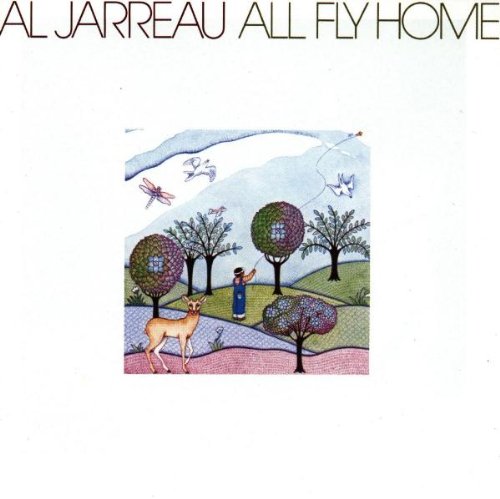 Al Jarreau’s first three albums,including one amazing live set the previous year all earned him a lot of critical acclaim. At the same time Al seemed to be seeking the same sort of commercial success he had overseas in his own country. Somehow it seemed that succeeding in jazz in American meant succeeding mainly with writers and critics. Which may have a little to do with why so many fans of the music began leaving it behind. So the best compromise for Al, who had no intention of abandoning his home grown vocal and writing talent,was through the sounds of soul and funk music.

The songs were flexible enough to allow for a lot of uncut jazz influence. But were,at least during the 70’s anyway also able to offer the possibility of American radio play and chart success. Al Jarreau wasn’t the only one taking this route. And as we all know the writers and critics had a field day of negativity with the idea. But creatively it wasn’t unsound and helped create at least a couple sub genres of music along the way: fusion and later smooth jazz. But what does this say for Al himself? Happily to my ears, this is one of the finest overall records Al Jarreau made in the 70’s.

Part of it is he’s still very much in his early and more jazz oriented phase. But he’s bringing somewhat more of a pop flavor into it too. “Thinkin’ About It Too” and “Wait A Little While” are sprightly uptempo pop/funk tunes-filled with somewhat abstract bass synthesizers,strong melodies and guess what? That vocal is still Al Jarreau being every bit himself. On “I’m Home” and “I Do” he’s back in his mainstay 70’s element: spare, electric piano based jazzy ballads that emphasize his style of vocalese. “Brite N’ Sunny Babe” and “All” both bring this bassy, mid tempo EWF/Charles Stepney style production.

Within this high level of musical joy,  there’s also a version of the sad Lennon/McCartney pop standard “She’s Leaving Home”. I don’t know why people don’t seem to like it. Al, doing his own harmonies same as McCartney on the original, sings the song with just the right amount of shock,regret and disappointment the lyrics require.On the more abstract of interpretations is the closing “Sittin On The Dock Of The Bay”. Done up in this startlingly unique stop and start funk-jazz arrangement Al completely re-harmonizes the song almost all in the minor chords.

For an album intended as something with more crossover potential compared to his earlier recordings, its very much in line with those albums for many reasons. All Fly Home’s primary focus is still on self written vocal numbers- based primarily in jazz. And any influences of pop, R&B, funk or anything else in the music really never takes away from the main focus. This is probably one of his most successful albums in terms of his crossover period in that regard.  If there are contemporary elements strongly at work here, you can tell Al Jarreau and his band are still firmly in control.

Anatomy of THE Groove: “No Problem” by Chuck Mangione

Chuck Mangione is likely the most commercially successful jazz flugelhorn players of the 20th century. After attending the Eastman School Of Music,Mangione filled the esteemed trumpet chair in the iconic Art Blakey’s Jazz Messengers. For at least two decades,Blakey’s Jazz Messengers had mentore many new generations of talented jazz soloists. And after forming his own group The Jazz Brothers with his keyboardist brother Gap,he went onto a hugely successful solo career-with his “Chase The Clouds Away” being used as an Olympic games theme song to the iconic pop smash “Feels So Good” that he’s best known for.

Those events occurred in the mid to late 1970’s. Having listened to more of his music at the recommendation of my friend Henry Cooper,it became clear that Mangione’s talents lay in him being a groove loving melody man. A lighter improviser similar to Herb Alpert,he also brought some of Miles Davis’s modal instrumental style into the pop end of the jazz fusion era-tending to record with smaller groups. This also extended into the 1980’s as well. One such example is from a song off his 1982 album entitled  Love Notes. The name of that particular song is “No Problem”.

Gordon Johnson’s sustained bass line begins the song,and bops along with the main rhythm throughout the song. Playing the melodic counter to this is Peter Harris’s heavily filtered (and very processed electric piano like) electric guitar. Flutist Chris Vadala and Mangione play the same bugle call type melodic solo over this. And this makes up for the primary body of this 12+ minute song,save for one pitch heightening at the 7 minute mark. On two occasions,Vadala’s guitar and Johnson’s slap bass play a wah wah fueled “chase scene” style funk bridge with Magione blowing harder lines before the song finally fades.

“No Problem” is very stripped down for its length. It has Chuck Mangione’s love of minimalist cinematic grooves. Its also one of those grooves that sounds,in its entirety,like the intro to a song that doesn’t ever fully start. Therefore there is lots of drama about it. Everything playing around Everett Silver’s insistent beat on the drums give it a decidedly 70’s flavor for a song that comes out of the early 80’s. Because the rhythm and melody are defined by so many empty spaces,its the sort of groove that someone could actually tell a visual story too. And therefore a great example of dramatic mood funk.

I’m sure there are a lot of people out there who would look back on this album who’d feel something of a guilt complex for liking an album whose musical virtues lay so heavily in it’s production. Sad to say even….a member of my family who I won’t name out of respect didn’t find this album particularly to their liking for a long time. Perhaps one of the reasons why this album has such a different reputation is that it represents a somewhat different Quincy Jones than the one who recorded Sounds & Stuff Like That several years earlier. That was a recording that owed a great deal of it’s musical energy to funk and R&B.

This on the other hand showcased a lot more sleek urban contemporary pop considerations and in the end sounds perhaps like a slightly more commercial record that Quincy had done up to this point. This was released around the time of Mike’s Off the Wall,Johnson’s Light Up the Night and Patti Austin’s Every Home Should Have One. If your already fully familiar with those three albums, than it may not be too necessary for you to read this review since you already sort of know the sound of it. For those who aren’t,here’s what this is.
One of the singer/songwriter/instrumentalists who caught Quincy’s ear around this time was England’s Chas Jankel from Ian Dury’s Blockheads. His debut Chas Jankel contained a song called “Ai No Corrida” that is presented here and,while not as musically abstract it is more “Quincified” along with the lead vocals of Charles May who takes the very British vocal affectations of Chas away from this version. The title song is the most thoroughly funk oriented number here with a stomping beat,bassline and keyboard solo with Q himself rapping as “the dude” along with an artist Quincy was at the time just in the process of developing-James Ingram.

The multi talented singer/musician/songwriter is featured on the slower ballads here such as “Just Once” and “One Hundred Ways”,which without surprise became the biggest hits. But they’re actually far from the best songs. Those were sung by Patti Austin. “Betcha Wouldn’t Hurt Me” and the compulsive “Razzamatazz” are both key uptempo songs here with a vibrant sophistifunk sound to them. “Somethin’ Special” is a similar but slower sort of song,maybe even a little more jazzy and another highlight with a rather adult romance audience in mind. “Velas” is a similarly themed instrumental featuring one of Q’s old hands Toots Theilmans on harmonica and whistling. There were stories I heard that the closing dance funk of “Turn On The Action” was originally intended for Michael Jackson. And honestly it does rather sound like him.

Believe it or not,a persons appreciation of this album will probably have to stem from whether they really take the urban contemporary jazz-sophistifunk sound of the early 80’s very seriously. Coming during the first years of the post disco era,where music of a certain rhythmic and racial signitures couldn’t be played on a lot of radio stations this along with similarly style albums during this time by people like Grover Washington Jr,Al Jarreau and Michael Franks also receive a similar treatment as being at best “a guilty pleasure” and as worst “a sell out”. Honestly I have absolutely no guilty feelings whatsoever in the level of enjoyment I have for this album.

If your a fan of edgy,angst ridden albums filled with a “keeping it real” attitude or something with a variant of hip-hop or neo soul rhythmic pattern to it…no I’d have to agree this album probably isn’t going to be your cup of tea. Whenever you have the level of production,musicianship and songwriting/vocal power you have with something like this it’s from a time and a place where the musical approach was very different. And above all being done by a whole other generation as well. No putting down anyone. But there’s just a different spirit behind this than much of…well even what Quincy himself is currently doing musically. And happily many people in the music world are still paying careful attention to works such as this.