Givin’ It Back: Remembering The First Isley Brothers Album Showcasing The 3+3 Lineup 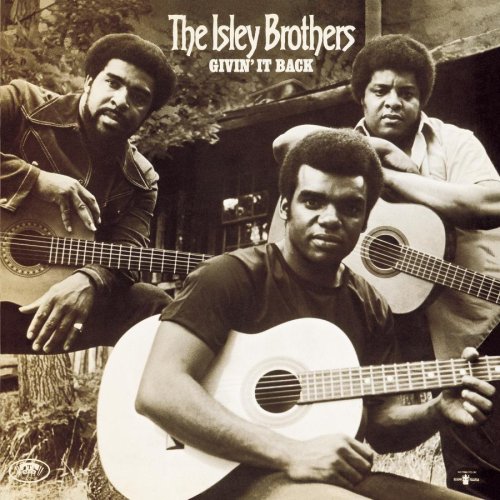 Marvin Isley, the youngest of the Isley brothers, may have passed away eight years ago. But the Cinninati born bassist graduated from the C.W Post College with a degree in music. By that time, he’d already co-wrote a major hit with the Isley’s in “Fight The Power”. Of course, the first time he and Chris Jasper actually played with Marvin’s elder brothers Kelly,Rudy and Ron came six years earlier. It was on a 1971 album where the Isley’s covered many pop and rock hits of the late 60’s and the then present day. It was called Givin’ It Back. And here’s a review of I wrote shortly before Marvin’s passing.

The late 60’s began the Isley’s funk period,circa 1968-1970 when their tune “It’s Your Thing” was enormous and every album seemed to leap them forward somehow musically. Than came this album. It’s 1971 at this point and the optimism of and defiance of the late 60’s had turned to more cautious,inward reflection. This effect musicians of all colors and back rounds and it had it’s effect on the Isley’s too. This album presents elongated cover versions of different pop tunes associated with that era,most of which had some cultural or political bent.

The sepia toned album covers features the three Isley’s with acoustic guitars and you do here those to a degree on this album but despite the way this was actually presented to me this is NOT an acoustic album by any stretch of the imagination. More accurately I would describe it as a mildly more psychedelic funk take on the folk/soul movement that was gaining some popularity at the time of artists such as Bill Withers.

The one thing you can guarantee from the Isley’s is that whatever they do you’ll find some of the most impassioned,soulful and intelligent interpretive vocalizing one is likely to ever hear and this album has it coming out the wazoo! The album starts off with a very Ike Hayes-like ten minute take on “Ohio” and Hendrix’s “Machine Gun”,both a good choice for a medley yes but the unique thing is it’s cinematic soul presented with some acoustic instrumentation so you get two flavors merging into one,yet again.

The most impressive thing about their versions of “Fire And Rain”,”Lay Lady Lay” and especially “Spill The Wine”,with that song’s originally rapped lyric element actually sung this time is how fully Ron Isley in particularly re-harmonizes the vocal arrangements and even if the music is on the same groove somewhat as the originals (melodically anyway) all of these songs sound heavily re invented as opposed to merely covered. The albums closes with the liked minded “Love The One Your With” and with that there’s a tone set not just for this particular album but the Isley’s future in general.

In the years to come after this they would continue refining different combinations of the flavors of this and the previous three albums prior to it to with their famous 3+3 format so even if this music literally reaches into it’s very recent past for song ideas it’s conceptualization also look forward to where the brothers were going musically.

At the time of writing this review, I actually had no idea that this particular album was both Marvin Isley and cousin Chris Jasper’s first time appearing with their elder brothers and brother Ernie,who’d started playing with the Isley’s just a year before. The Isley’s  would go through some amazing changes during the earlier part of the 70s-from a psychedelic tinged funk/soul sound to the folk/soul singer-songwriter stylings of Givin’ It Back. They were playing many styles of music that went with what’s called the funk process. And as a bass player, Marvin was a major part of this transition.

Anatomy of THE Groove: “Shakey Ground” as performed by Phoebe Snow

Phoebe Snow is a native New Yorker who went from an artistic family who raised her in Teaneck, New Jersey to her college years of gigging from one Greenwich Village nightclub to another. She released her self titled debut album in 1974-having her biggest hit with “Poetry Man”. Her sound was somewhat unique-a mix of folk,rock,funk,soul and blues that suited her distinctive,bluesy growl that could also spread across several octaves. Her decision to give up music to care for her child born with severe brain damage halted her career after the early 80’s. But she never totally disappeared.

Her selfless parenting didn’t stop Snow (born Phoebe Taub) from performing the theme song for the first season of the sitcom A Different World. And released a few more studio albums before her death of a cerebral hemorrhage in 2011. Her third album It Looks Like Snow was her second for Columbia Records. On it she interpreted a song that was one of the last major Temptations hits before leaving Motown. It was co-written by P-Funk’s Eddie Hazel along with Jeffrey Bowen. Its an amazing groove for sure. But in 1976 for her third album, Phoebe Snow offered us her own take on “Shakey Ground”.

The hard groove wah wah guitar riff and metronomic drum count in begin the song as on the original. Yet the straight up,acoustically textured blues guitar riffing before the main groove starts adds a totally different flavor to it all. After all of this, there is the layers of guitar: rhythm and wah wah along with an accenting Clavinet. And of course the horns playing the changes. On the instrumental bridge, the bluesy guitar from the intro (likely played by Snow herself) takes a full on solo. That’s before Snow’s vocals take the chorus on an extended musical journey before it fades out.

There’s not much point in me comparing Phoebe Snow and The Tempt’s versions of “Shakey Ground”. Each are hard funk monster jams in their own right. Its the little things that really make the difference on Snow’s. Her super bluesy guitar riffs and solos give it a slightly more old timey flavor. And her jazzy,growling and sometimes unpredictable vocals give the song an emotional vibe on par with the strongest end of the mid 70’s female perspective. When thinking of what would’ve been Snow’s 67th birthday, this song somehow seemed exactly the right one to overview from a funk/soul perspective.