Tag Archives: Take Me To The Next Phase 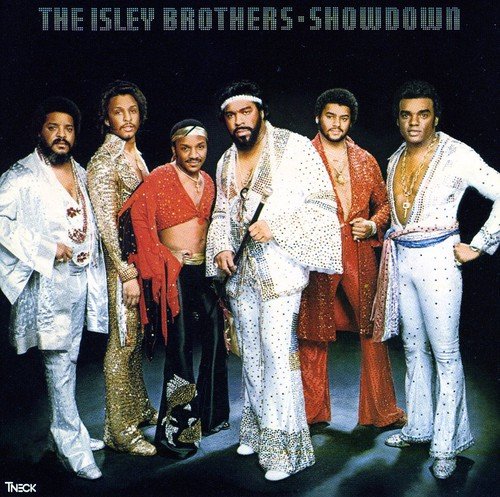 Showdown was recorded in 1978 as the follow up to the Isley’s Go for Your Guns, which followed through with the fast paced funk style of the three previous 3+3 era Isley Brothers’ releases. On the Showdown album, everything had begun to change for this family band . In focusing more on slowing the funk down to this smoldering hot crawl of a groove,even the uptempo stuff  has a sleeker (and less brittle) approach in their instrumentation. This resulted in a certain lushness that mildly  hinted at the disco/dance sound in some of its rhythmic pattern.

The title track is about as great an example of this sound as one could ask. And the Isley’s of course work the groove straight into the subconscious, whilst talking full advantage of the slower tempo.  In the end, that makes the bass/guitar interaction all the funkier. “Groove With You” is another case where the Isley’s do their best type of bedroom groove,setting up the most romantic imagery and of course the music just melts like caramel. “Ain’t Givin’ Up No Love” is type of funk jam that’s like a fist slamming down slow and hard onto a table and leaving an enormous crack.

The simple fact that Chris Jasper seriously throws down with his bass synth on this one right along with Marvin’s bass guitar just throws out all kinds of extra punches. “Rockin’ With Fire” and “Love Fever” are all two part Ernie Isley funk/rockers that all showcase his guitar work and the power of this rhythm section. All are taken at the faster pace of this album. “Take Me To The Next Phase” is just about the most glorious funk jam the Isley’s ever did. In the funk tradition of James Brown,  “Next Phase” is a studio recording overdubbed with applause and band banter to sound like a live stadium performance.

“Take Me To The Next Phase” ends up capturing the flavor of both their own sound along with a bit of Stevie Wonder style funk chords (not surprising since they both utilized the electronic sounds of TONTO at the time) and despite it’s lengths leaves you hoping for more. ‘Coolin’ Me Out” is a more pop crafted variation of the same sound and still turns out to be an incredible jam-probably one of the most unsung on this album. “Fun And Games” harnesses a bit of a West Coast jazz-pop influence in the melody along with the peppy groove.

Showdown is an album that I felt for years was a bit of a letdown compared to its predecessors. In terms of funk, what has been revealed over many listening’s is that its actually an album with one great, iconic song (“Take Me To The Next Phase”) and seven other good to very good songs with…good to very good grooves. That is somewhat what happened upon listening to Funkadelic’s final two 70’s releases with me as well. At four decades old now, this album remains as another potent reminder of how unique the 3+3 era Isley Brother’s were with their take on the funk/rock hybrid.