Off The Record: Andre’s Review Of The 2013 Solo Release From Kraftwerk’s Karl Bartos 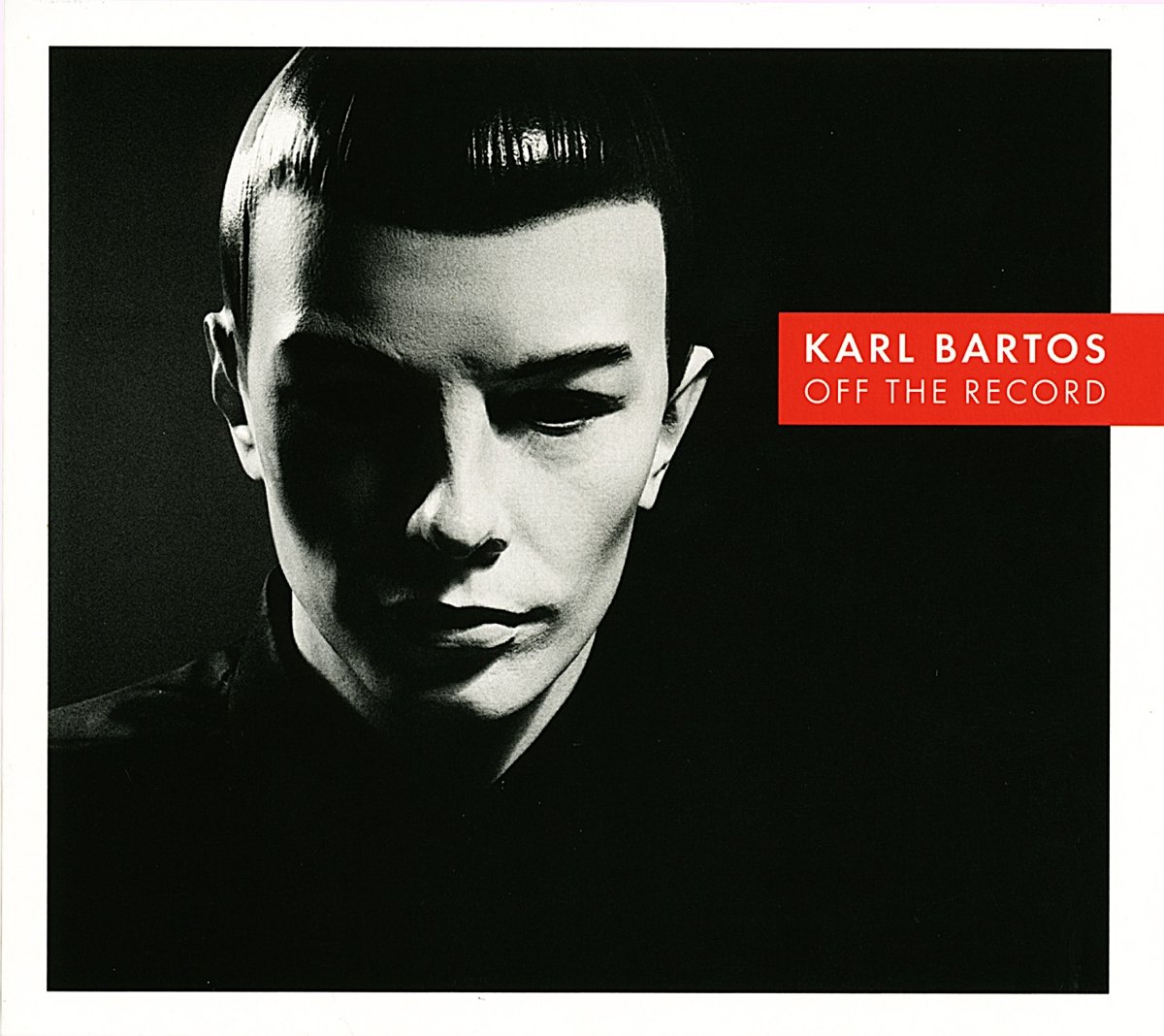 During his time as a member of Kraftwerk, Karl Bartos was apparently something of a musical archivist-using a number of tape machines to record different synthesizer ,computer and electric keyboard loops and snippets that were floating around as raw material as Kraftwerk were producing the music that would be so massively influential to future generations. Karl knew they would probably be of some use to him,someday.

But he didn’t know exactly when. Then came a period between 2010 and this release where,in the midst of conceptualizing his next album,he decided it was now appropriate to construct some type of form out of all the unfinished bits and pieces he had taped during Kraftwerk’s fruitful constructivist period. So he added his own new album concept into fleshing out these musical archives,and the result is this new album.

Not surprisingly this album has the flavor of a classic Kraftwerk album in their heyday. But there’s a very strong individual flavor as well. “Atomium” opens the album,a very orchestral and cinematic venture atypical of Kraftwerk’s more stripped down approach. It sounds like the opening of a feature film almost until snippets of vocoderized conversation about the rise and fall of the atomic age kick in,and one realizes it’s something else.

“Nachtfahrt”,”International Velvet” and even the largely instrumental closer “Hausmusik” are all happily melodic,minimal electronic pop firmly in the late 70’s Kraftwerk tradition of the form. “Without A Trace Of Emotion” and “The Tuning Of The World” strike more somber chords,as a longing for a grand creative subculture and,with no irony lost,a sense of humanity even in electronic music making up the lyrical form of these songs.

“The Binary Code” is a nearly two minute embodiment of “the video game sound” synthesizer composition in action,likely a taped loop unmixed from it’s approach. The almost industrial house approach of “Musica Ex Machina” as well as the far more experimental sound abstractions of “Instant Bayreuth”,”Vox Humana” and “Rhythmus”. These songs are a lot more complex rhythmically and melodically. And sound as if they come from the mid 80’s as Kraftwerk were regrouping to record as they reflect the influence of electro-funk/hip-hop to some degree.

There is a flavor to this album of a compilation of unreleased Kraftwerk material. But if one digs a little deeper there’s quite a lot more of Karl Bartos the individual as well. He has a thoughtful and reflective personality,illustrated in the in depth liner notes on this CD,that comes across loud and clear on his musical and lyrical choices. It’s an excellent recording I highly recommend to anyone who has a strong interest in Kraftwerk and the electronic music revolution in general.

Originally written as an Amazon.com customer review on March 22nd,2013

Kraftwerk now represent part of the base value of the electro funk sound as far as I’m concerned. Obviously Stevie Wonder’s 70’s works on TONTO innovated that sound in a major way as well. A large part of Kraftwerk’s sonic additions to the electro/techno music genres come from the album that’s celebrating its 40th anniversary today-1977’s Trans Europe Express. Ralf Hutter,Florian Schneider,Karl Bartos and Wolfgang Flur had already been the going lineup of the group for four years by the time this came out. And it not only changed the face of music,but the entire general sound of the group itself.

Since their 1974 album Autobahn, Kraftwerk’s music had been becoming more thoroughly electronic in nature. The interesting thing I didn’t know about Trans Europe Express was that it was conceived and recorded in 1976-releasing the next year. That meant that it all came to be before Donna Summer’s equally game changing electronic dance masterpiece “I Feel Love” with Giorgio Moroder. Karl Bartos once spoke of James Brown in a recent Krautrock documentary as being a huge rhythmic influence on Kraftwerk’s late 70’s and early 80’s sound. And much of that got started on this album.

Much of Trans Europe Express is divided into two musical suites-each divided into separate cuts. Yet each following unifying themes. The “suite” of “Europe Endless” (which begins the album),”Frans Schubert” and the closer “Endless Endless” all surround the use of the Synthanorma sequencer,a customized device which allowed them to electronically orchestrate these pieces-melodically based in European classical music. The first of these numbers develops into a rhythmically grooving uptempo jam that runs for over 9 minutes. The sequenced melody is the glue that binds it all together all the same.

“Trans Europe Express” is all based on a slow,heavily resonating electronic drum/ percussion rhythm. The melodic instrumentation involves a series of up and down scaling orchestral string synthesizers backed up by some thick,funky Moog bass. On its extended shadows “Metal On Metal” and “Abzug”,the spoken word elements and orchestration are replaced by electronic industrial tones and repetitious choral vocals. There are two other separate songs on the album. One is the slow,ominous pulse of “The Hall Of Mirrors” and the percussive,almost melodically Gothic styled “Showroom Dummies”.

It was really two people who got me interested in the Trans Europe Express album. First was Afrika Bambaataa. And the other was my father. He told me a story of how he and his old friend David were driving to the Maine state capitol of Augusta while playing this album on an 8-Track. My dad described a memory of hearing the song “Trans Europe Express”‘s metronomic,train like rhythm as they watched the lines in the middle of the road go by. Considering Kraftwerk’s love of industrial rhythm going back to “Autobahn”,this is a superb aural legacy as to the type of groove Kraftwerk innovated with this album.

Trans Europe Express also innovated the way electronic albums were assembled. With six of its eight tracks being variations of two songs, this could very well be one of the first extended remix albums as well. Its implicit lyrical themes of cultural celebration (in this case a futurist,unified Europe) and celebrity self reflection are likely just some of the reasons this album is so influential on electro hip-hop and techno music genres. In as much as it in turn wrote the book on what has become the EDM genre, Trans Europe Express remains a treasure trove for both explored and unexplored dance music revolutions.

Anatomy of THE Groove: “Ruckzuck” by Kraftwerk

Kraftwerk (German for “power plant”) were a group who came to my attention through a PBS documentary talking about electro funk pioneer Afrika Bambaataa. He was explaining how when he first heard the German groups album Trans Europe Express,he was convinced this would be the music for the future. Thanks to Bambaataa’s parties for his proto hip-hop collective Zulu Nation,late 70’s Kraftwerk records became major fixtures at black and Latino dance parties throughout the Bronx and Brooklyn. As krautrock’s prototype for what became today’s EDM sound,Krafwerk had an origin point all it’s own within their native country.

The group’s founders in keyboardist/guitarist Ralf Hutter and flutist/percussionist Florian Schneider,whose celebrating his 69th birthday today,came together at the very end of the 60’s in a psychedelic fusion oriented band known as the Organisation. After that bands first and only album, Ralf and Florian  formed their first addition of Kraftwerk along with drummers Andreas  Hohmaan and Klaus Dinger for their self titled debut. Released in 1970,it was produced by the iconic krautrock producer  Konrad “Conny” Plank. Upon first hearing the album,the opening song stood out to me with heavy familiarity about it. The name of the song was “Ruckzuck”.

Florian begins the song with a double tracked flute solo playing very Arabic style scales. He then brings a very whisper,brittle violin solo which instantly kicks into the song itself. Hohmann’s hi hat heavy,rolling 2 by 2 beat snare drum pushes along at a hard grooving tempo with Hutter’s high pitched organ providing the main melody. Florian’s flute flows in and out of the mix. As Hutter’s organ grows more atonal and higher in the mix,the main melody of the song suddenly returns at an accelerated tempo. Then the whole disappears into a sea of tribal,very aboriginal African sounding percussion before that accelerated main theme fades back in to officially close out the song.

Henrique Hopkins and myself have had a number of discussions on Kraftwerk providing more raw instrumental material than strong melodic song content to those influenced by them. The Kraftwerk on this song are very different. Later member Karl Bartos said once that one the groups main key influences was James Brown. That can be heard on this song having such a complete relationship to rhythm-even the violin soloing. Because everything in this song is mixed in such close proximity,I cannot tell my next point for sure. But it does sound as if the rhythm is deeply locked into the Afro-Latin clave as well. That plus the very tribal pulse in the middle of the groove brings that out as well.

It was a few years ago that the songs familiarity came to me via YouTube. In the late 80’s and early 90’s,about 30 seconds of this song was used as the theme song to the PBS science program Newton’s Apple. The use of the song was apparently unauthorized and was replaced by a cover version during the shows later years. Part of the reasoning for this had to due with Ralf and Florian seemingly disowning this and Kraftwerk’s next two albums after the late 70’s-with Florian himself referring to them as “archaeology”. Even still,hearing Kraftwerk’s first song from their first album in such a progressive jazz-funk context showcases what their musical core has remained over the years.