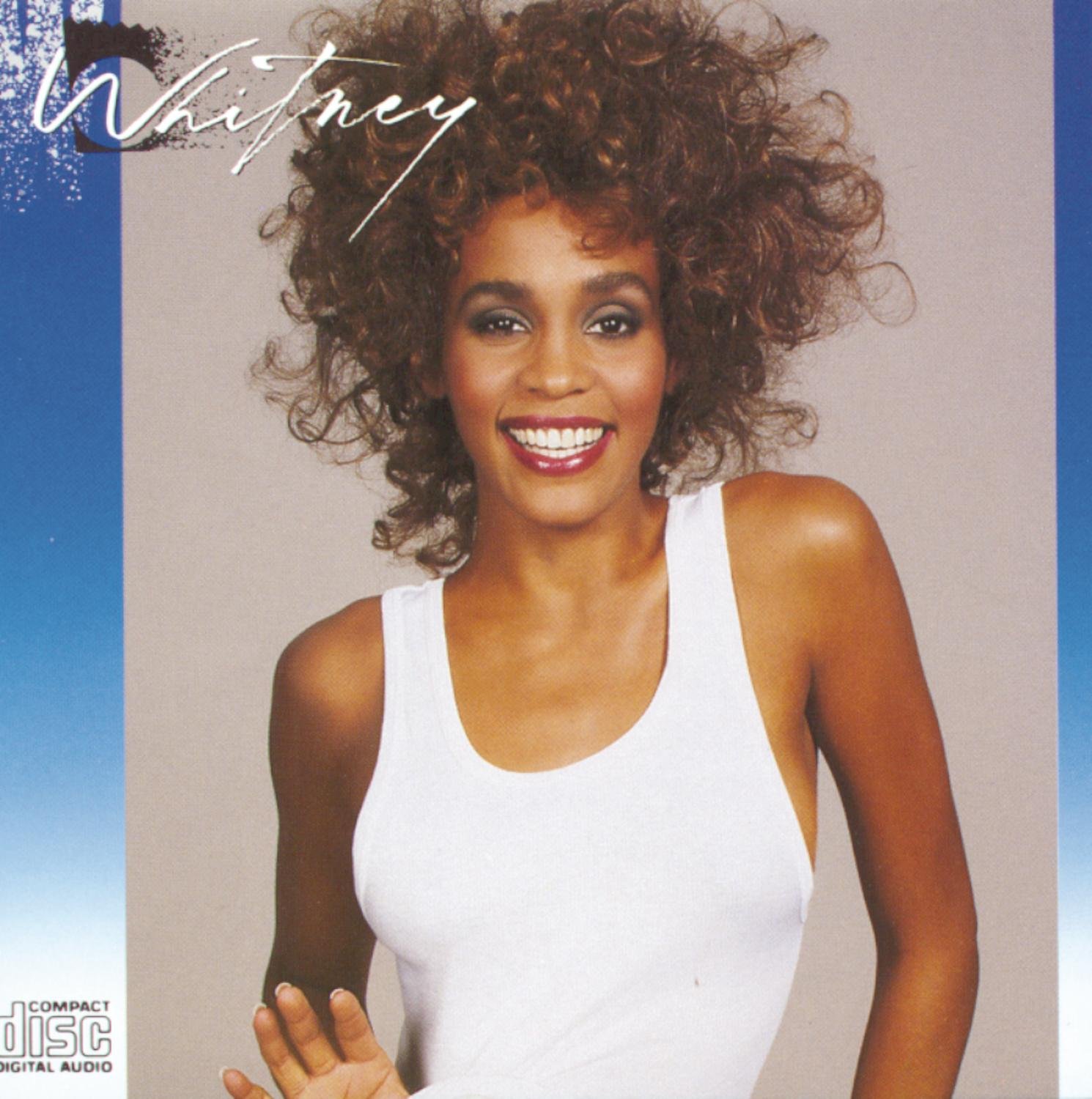 Interestingly enough, I didn’t hear this particular album until well over a decade after it came out. Some of it might’ve been a degree of overexposure,even within the family to her self titled debut album. Even after this had been out for some time. Produced as before with the Narada Michael Walden/Clive Davis team who were also churning out mid 80’s hits for Whitney’s godmother Aretha Franklin,boogie funk maestro Kashif is also on board for this session. Over the years, I’ve read in many publications that all these “cooks in the kitchen” (when it came to producers) diminished Whitney’s vocal presence.

Considering  how much I’d felt Whitney had been bound by her producers when she first came out, this album gave me the impression of being nothing but surface glitter for a wonderful vocal talent. Whitney is also someone who at the time everyone was really rooting for positively. And perhaps we all still do musically anyway. But once I took the negativity of some writers and that of musical pop culture in general,the whole “antieightiesitis” deal,out of the context of this album and really listened to it there’s a possibility this may be Whitney’s most varied and accomplished work of the decade.

For sure the production is big, bright,full of life and major chords but so is Whitney. Her utter joy and rapture in succeeding so much musical blood already in her family is more than apparent. First off this album is home to two of her brightest dance numbers. “I Wanna Dance With Somebody (Who Loves Me)” is a complete late 80’s dance/pop tune but with enough of that gospel/soul style joy from Whitney to make it work. “So Emotional” is meaner and funkier,with something of a Minneapolis/Janet Jackson synth influence.

In a lot of ways Whitney is a far more uptempo based album than her debut,with far more danceable songs. My two personal favorite in that regard are the sleekly jazzy/funk style of “Love Will Save The Day”,featuring a vibraphone solo from Roy Ayers himself and a cleverly chorded hook. “Love Is A Contact Sport” showcases this shuffling retro Motown/Holland-Dozier-Holland type rhythm and a sassy pop/soul atmosphere. Of the ballads my favorite here, probably one of my favorite slower tunes of all of Whitney’s is “Just The Lonley Talking Again”,a reflective,jazzy heartbreak type slow groove.

Ideally, Miles Davis would’ve been perfect playing on “Just The Lonely Talking Again”. And while the name of Kenny G being on it might induce some to cringe…his sax solos do actually gather some some quiet fire here. Of the slower material I honestly prefer Kashif’s “Where Are You” and the gospel powered “I Know Him So Well”,a mother/ daughter duet between Whitney and the husky voiced Cissy. “Didn’t We Almost Have It All”,”You’re Still My Man” and “Where Do Broken Hears Go”? Well two of them were huge radio smashes but were somewhat predictable with what her debut had to offer.

If your a fan of that “big ballad” thing of Whitney’s, the songs just discussed  are great examples of that. And taken as they are they really do complete this in terms of being a pop package. Aside from these matters, the album is actually full of some exciting and energetic vocal and compositional surprises. And in the end,the mix of four producers including Jellybean and Michael Masser (along with Narada and Kashif) actually don’t end up being very intrusive at all. Everyone involved realized how to accommodate the “star” vocalist here.

I imagine her abilities and enthusiasm more than carried the sessions too. Not to mention Whitney also doing her own vocal arrangements here. As with the female soul vocalist greats Whitney admired and came from,she elected to remain an interpretive force strongly involved with the creative process. And on these upbeat songs about love,longing,devotion and joy itself are a reminder of all of her talents. And why so many including myself will miss her being around.

Anatomy of THE Groove: “Love Will Save The Day” by Whitney Houston

Whitney Houston became the first female artist in the US to enter the album chart at #1 30 years and two days ago. That reminded me of that element of Whitney’s success that always had me torn. Nobody can deny Whitney’s pipes. Yet even early on in her recording career, artist development on the musical level wasn’t always considered too heavily. Her output was uneven across her albums as a result. That being said, along with her huge commercial success went through the roof, some came to view her as a natural born sellout later on.

This matter led to my mother,an early fan of Whitney,basically abandoning any and all interest in her after Whitney’s self titled 1985 debut album. So it wasn’t for decades after did I go back and rediscover her second record. Whitney basically polishes up the sound of her debut album-mixing dance numbers with heavily arranged “big ballads”. There was one song on the album that instantly got my attention-both musically and lyrically. It featured jazz/funk vibraphonist Roy Ayers (a personal favorite of mine) as well. The name of the song in question was “Love Will Save The Day”.

A gated drum opens the song,after which the rhythm turns to a steady dance one accentuated by ringing Latin style bell percussion-along with a thick rhythm guitar held together by a slippery synth bass line and Pitch bent synthesizers.intro. By the refrains, that synth is replaced by one with an Asian type melody to it. On the choruses,the synths begin the match the bell like percussion more. After a few rounds of this, Roy Ayers improvises on the vocal melody right along with Whitney’s vocals on the bridge. The song then climbs up an octave for the final chorus which brings the song to a dead stop.

“Love Will Save The Day” is, to me anyway, where everyone from producer Narada Michael Walden and musical guest Roy Ayers actually seemed to understand what Whitney Houston required in an uptempo song. The base of the song is synthesized Latin freestyle, with that jazzy funk flavor on the solo.. The lyrics set up a serious of emotional situations and emotions. With Whitney offering comforting words not to “panic when you hit the danger zone”. Honestly, if Whitney’s music had forged ahead in this manner consistently? She’d probably be more of a musical icon than a mere celebrity one.

Anatomy Of THE Groove For The Brothers And Sisters Who Aren’t Here: : “Million Dollar Bill” by Whitney Houston

As strange as it may seem, Whitney Houston has been gone for five years as of yesterday. The tragedy of her and Bobby Brown’s only daughter Bobbi Kristina last year kept me away from writing about any of Whitney’s music on this blog. Of course with a good amount of time away from the negativity surrounding both of their passing bought Whitney’s positive musical triumphs back into perspective for me. Known primarily as a balladeer during the bulk of her career,the huge voiced singer continued to make quality comeback albums during the 90’s and early 2000’s whenever her personal situation allowed. By roughly 2004,even I had to admit she seemed to just disappear from the music scene.

In the late summer of 2009,Whitney burst back onto the scene with what turned out to be the final album she released in her lifetime. This album I Look To You was a very happy surprise for me having been recovering from the then recent passing of another 80’s era musical icon Michael Jackson. It was one of neo soul’s shinning stars in Alicia Keys and her then relatively new husband Swizz Beatz who really came through for Whitney on this album in terms of writing. And right at the beginning too because while the couple only appeared once here,it was a very memorable one at that. The result was “Million Dollar Bill”,a song that for me is one of Whitney’s musical triumphs of her latter days.

A fanfaring drum role starts off the songs 4/4 beat and accompanying chordal bass thumps. The refrain of the song features an elaborate drum solo that keeps putting itself in and out on the one with it’s brushing/cymbal work. It goes from subtle to right in your face right along with Whitney’s scaling,climactic vocals. The rhythm is kept going by a phase filtered Fender Rhodes electric piano right out of the Gamble & Huff school of mid 70’s uptempo Philly dance records. That keyboard solo occasionally takes on a higher,chiming tone on those more subtle moments.  The instrumentation takes a total break for Whitney’s final chorus before closing out with a final burst of music and vocal power.

Actually this is one of my very favorite Whitney Houston songs ever. With her huge gospel/soul pipes, I always wondered why she didn’t tend to make uptempo songs a huge priority. Especially since she had so many excellent ones anyway.  This song gave a modern production flavor to a classic disco era Philly uptempo dance groove. Especially with how Whitney’s go from nuanced to soul shouting right along with the drums-which themselves go from a light brushing sound to being heavier and higher up in the mix. It also shares a similar juxtaposition in tempo as Diana Ross’s “Love Hangover” as well. Take n on it’s own,it’s one of Whitney’s finest uptempo numbers.

Anatomy Of THE Groove For The Brothers And Sisters Who Aren’t Here: “Something For Nothing” by Natalie Cole

Several days ago? The new year of 2016 wrung in rather sadly with the news that Natalie Cole had passed away from complications with congestive heart familiar. Having been the daughter of Nat King Cole and growing up in a family she described as “the black Kennedy’s”? Natalie, in a similar manner to the also departed Whitney Houston, has occasionally been viewed as someone whose talents derived largely from genetics. Perhaps this led to the years of drug related self destruction that likely contributed to her death at age 65.

Being inspired by soul and rock  music more than a jazzy approach? It was now iconic Chicago producers Chuck Jackson and Marvin Yancy who really helped to beef up Cole’s career. After some unsuccessful label shopping,the team ended up at her fathers old label Capitol. There they all began polishing up work on Cole’s debut album Inseparable. While as a whole it’s gospel/soul ballads and uptempo numbers would define much of Cole’s musical output? The funk got turned up high on numbers such as one of my favorites here entitled “Something For Nothing”.

The groove kicks off with an ascending,classic funk riff from a bassy Clavinet. It’s assisted by a tickling soul stride type honky tonk piano. On each of these phrases? A high pitched,bluesy rhythm guitar riff rings into the next part of the song-all orchestrated by minor chorded strings. Assisted by stop/start funky drumming all the way? The Clavinet buoys the song until the strings and piano spin off into a bright,major chord 70’s Chi Town soul melody on the bridge before it all fades out on it’s original theme.

Listening to this makes me wonder why Natalie Cole,with her gospel heavy soul pipes,didn’t prioritize the evolution of funk as her career pushed forward. Considering how much this particular number has in common with Rufus’s “Tell Me Something Good”? It’s a song very much in the spirit of the “who says a rock band can’t play funk” ethic of taking the blues base,and smoothing it out for a more soulful and danceable groove. It’s still one of the finest examples of Natalie Cole with a strong groove and a strong tribute to her as a potential funky diva.