Herbie Hancock-‘Thrust’ & The Continuing Musical Mission Of The Headhunters 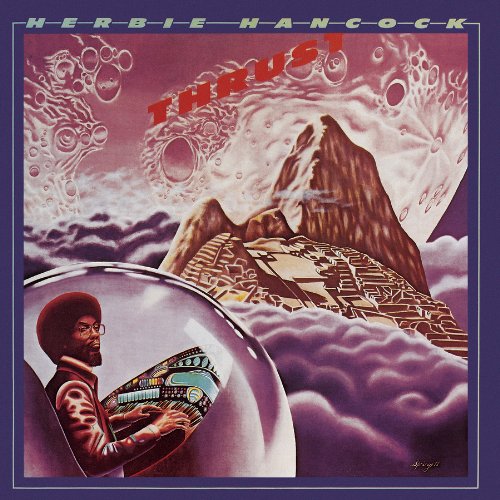 Herbie Hancock’s turned career heavily toward funk with the Head Hunters album. Its a style he’s never fully abandoned to this day. True, he never stopped playing acoustic jazz either. There’s a quality of “oneness” he sees in regard to the two musics,which he’d later extend into the hip-hop era. By this point he’s dealt with a lineup change. Harvey Mason has left for a solo career in 1974. So Herbie brought in the worthy, and very talented, successor Mike Clark. This not only made the Headhunters a biracial unit.  But it also represented another musically funky stride ahead.

While it was every bit the success of it’s predecessor, it was out of print on CD until the late 90’s and even still tends to be slightly overlooked. But if your familiar with Herbie’s albums before this you’d know his sound for the rest of the 70’s would’ve been completely different without the presence of this album. While it’s not fundamentally different than Head Hunters there are vital changes in approach that make the difference. With it’s use of breaks “Palm Grease” this funk groove is the closest thing to what was heard on the previous album.

“Palm Grease” also augments the pulsing synthesizers ,as it does on most of this album, with Herbie’s processed Clavinet. Also the synthesizers are more of an orchestral sort-using the newly employed ARP strings which Herbie himself would later lament he too often tried to use to simulate actual strings. This created a dreamier effect than perhaps intended. “Actual Proof”, a title based on a certain type of Buddhist chanting is an extremely fast past, repetitive yet musically crowded piece with lightening fast Clavinet riffs until again, towards the middle it’s back towards more of a jazzy keyboard groove.

“Butterfly” is a wonderful composition, one of Herbie’s finest and features a smoother Rhodes solo showcasing more use of space than the rest of this album tends to,focusing on inventing new melodies from the reeds and keyboards. “Spank-A-Lee” on the other hand is very straight ahead jazz-funk, NOTHING like what you’d hear on the previous album with its in the pocket rhythms and Clavinet riffs. With  striking cover art depicting Herbie in a musical space pod descending upon some lunar base, this has a place as one of my favorite Headhunters era releases.

For me, Thrust contains the most well realized fusion of jazz, funk and soul of any of Herbie in this period. And expands on the sound  forged on Head Hunters. It also show show funk wasn’t merely a 70’s R&B/soul style. But that it represented a creative way of using rhythm in music to expand it towards its most creative end. One can easily dance to this, it contains more than enough musical breadth to enjoy it on the instrumental level. And one can even hum or sing the melody of tunes like “Butterfly”. Whatever else Herbie Hancock has done and continues to do, he can be proud of music of this caliber