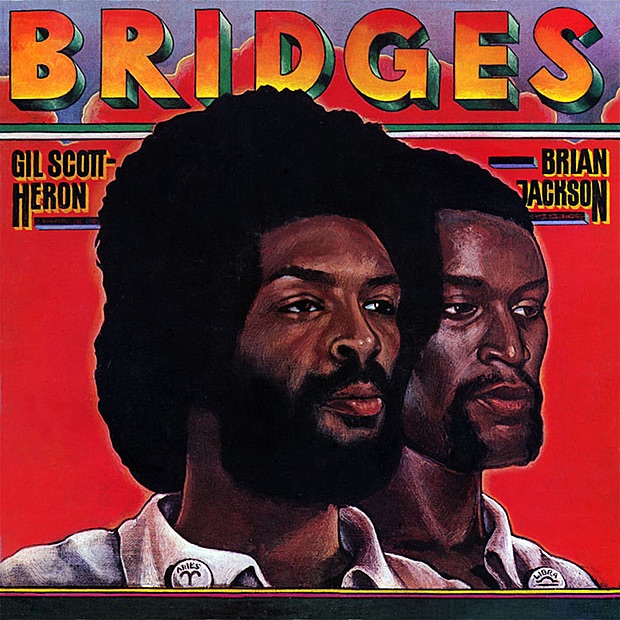 Gil Scott-Heron released this album at a very key time for his particular creative bent. This came out during the beginning of the disco era and for many, outside the influence of the Philly sound, there just didn’t seem to be too much room for complex sociological dialog in the music. There were songs with MESSAGES, yes. But in terms of the deep poetic insights you’d find from someone such as Gil Scott? It all seemed to be getting away from us at a time when it was needed most.

Heron was intensely aware of these changes in music. And had every intention of maintaining his vision and style. Even in the face of so many uncertain changes in the music industry. This album was recorded using TONTO, the massive synthesizer complex that had worked miracles for Stevie Wonder and the Isley Brothers during their early/mid 70’s height. Even at this point,  it was all too easy for this huge instrumental complex to create a sound that was both very much in the now and futuristic.

And musically, Bridges is indeed futuristic sounding funk for the people . Aside from Brian Jackson’s multi instrumental talents, the Fender Rhodes as well as the sound of the massive TONTO weaves it’s electronic, bubbling chords and bass lines into the musical tapestry to create unique sounds. Just as much as what Stevie and the Isley’s had done with the same instrument. The mood it sets goes right along with the emotional accompaniment of Gil Scott’s vocal style. The bass oriented sounds in the production is pushed up front. And the improvised jazz-funk element gets the same effect.

Song wise the album ranges from uptempo, positive spirited melodic funk such as “Hello Sunday! Hello Road”, the amazing “Racetrack In France” and “Under The Hammer” to slower and richly varied in texture and melody type tunes such as “Vildgolia (Deaf,Dumb & Blind,”We Almost Lost Detroit” and “Delta Man”. The range of subject matter of these songs (as usual with Gil Scott) is densely layered-ranging from enlightening muses both the concept of prejudice itself to the escape from it. Along with the usual historical contexts.

Songs such as the acapella “Tuskegee #626” tackle a well known historical atrocity (in this case the Tuskegee Experiments) but does so with a very bright and almost sunny melody. This showcases Heron’s understand of the very sharp contrasts in the lifestyles of not only the African American culture. But how it also extends those contrasts into other aspects of life for Americans of other nationalities. This welcoming, humanistic album would be followed the more darkly reflective Secrets- also using TONTO for that as well.

Gil Scott-Heron and Brian Jackson had certainly proved their meddle in terms of how they were able to continue adapting their art their own way during an era. An era when artists were losing more and more control of what they did. And when you listen to this, and realize the influence it’s had on so much musical poetry and the hip-hop world today, (and Gil Scott is for all intents and purposes a hip-hop artist anyway) than you know your in for something very special and meaningful.

Anatomy of THE Groove: “Show Bizness” by Gil Scott-Heron and Brian Jackson

Gil Scott Heron described himself as a “bluesologist” in his 1982 concert film  Black Wax. In a lot of ways,that pretty much describes the entire lexicon of black American music. From jazz up to funk. In the beginning of his recording career in the late 60’s/early 70’s,Heron was recording primarily spoken word poetry over Afro-Latin percussion. Gradually the arrangements swelled to included jazzier electric pianos and bass lines. By the time he began collaborating with keyboardist Brian Jackson in the mid 70’s,Heron was singing. And his music was on the forefront of socially conscious,poetic jazz-funk music.

After having been signed to Arista since 1975,Gil and Brian eventually reduced the participation of their instrumental ensemble The Midnight Band and began working more with Malcolm Cecil on his TONTO synthesizer complex. Their 1977 album Bridges began the pairs focus on creating new synthesized musical worlds for Heron’s songs to live in. Their follow up album was 1978’s Secrets. This album garnered Heron a Top 20 R&B hit in the funky groove of “Angel Dust”. This was an album chocked full of funky grooves. But the one that’s standing out for me right now is called “Show Bizness”.

The song starts off with a high pitched synthesizer playing “There’s No Business Like Show Business” in the minor key. This is done over a brittle electric piano and a thick layer of synth bass and steady drumming. The remainder of the song lays that grooving, percussive synth bass down-and locks it right in tightly. From the chorus to the refrain, higher pitched synth lines play melodic call and response support to Heron’s vocal leads. And to that of the upfront backup singers as well.  That lead synth that started out the sng brings it on home with a very jazzy blues style melody.

Instrumentally speaking,this album was presented to me by friend Henrique as being an example of Stevie Wonder’s sonic influence on musicians. And this song in particular does have a similar musical vibe to Stevie’s “Jesus Christ Children Of America”. With the decedent wealth of Donald Trump making this current US presidential election such a high stakes,yet almost farcical mess this song has deep resonance now. And with the future election of President Reagan.  It takes of ignoring social decline when gaining fame. And that makes it a strong synth funk process number aimed at the idea of celebrity itself.

The late Gil Scott Heron,self proclaimed “bluesologist” evoked a three prong musical transition in the 1970’s. He began by primarily performing raps over percussion and flutes to a melodic small group jazz/funk sound. During the late 70’s,he and his keyboard playing musical partner Brian Jackson began utilizing synthesizer abstractions in their music,based on the sounds created by Stevie Wonder at the same synthesizer facility Brian was using-TONTO. In 1980,Gil and Brian elected to put their collaboration on pause to pursue separate interests with their album 1980 at the very start of the new decade with it’s lead off song “Shut ‘Um Down”.

Beginning with a low rumbling piano that ascends into an explosive up-scaling after which Gil declares “hey what’s that rumble/did you hear that sound/know it wasn’t no earthquake,but it shook the ground”. The musical accompaniment has instantly swelled by this time into a slow,stomping and incredibly funky dance beat with very grits and gravy style juke joint piano accompanied by a medium pitched,rocking amplified guitar. On the choruses Gil is accompanied vocally by gospel drenched female backup singers along with a horn section blowing and wailing the changes. On the refrain,Brian Jackson takes over on a deep synth bass accompanying himself on a higher pitched ARP-sounding melodic synth line.

Musically speaking this song evokes the clean,concise production of a song such as Herb Alpert’s “Rise” with a get down and funky attitude-full of psychedelic soul flourishes,female choral vocals that take it back to Church as the saying going and most importantly? It all emphasizes Gil’s consistent emphasis in his vocal/song structured music on the usefulness of the very basic blues form in just about every aspect of black American music of the 60’s,70’s and even the beginning of the new decade. The song has a disco era four on the floor beat. But it really brings out George Clinton’s musical idea that anytime the rhythms and beats are slowed down? The music get’s incredibly funky.

Lyrically this song took on a theme one might not expect from Gil Scott-Heron. Long a champion of black power with his combination of razor sharp wit and homespun wisdom,this song deals with the massive environmental “no nukes” movement that arose enormously after the near meltdown at the Three Mile Island nuclear power plant in 1979. Gil calls for the immediate shutdown of all such power plants in America. Having been “thinking about power” on a literal and figurative level? He’s concluded that we’ve “gotta work for Earth,for all it’s worth ’cause it’s the only one we’ve got”. As one of the very few black musical spokespeople for environmentalism during the early 1980’s? This song is a strong thematic continuation of Marvin Gaye’s “What’s Going On” from a decade earlier. And as such being strong “people music” represents one of Gil and Brian’s very funkiest jams ever!