A Blow For Me,A Happy 40 Years For You: The Album Where Fred, Maceo And P-Funk Officially Met At Their Crossroads 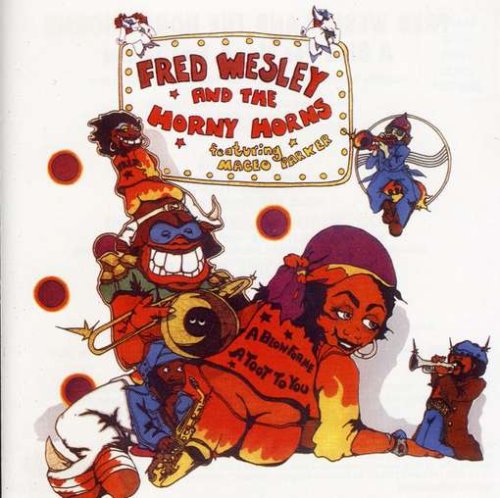 The clean transition from James Brown to George Clinton’s P-Funk all comes down to Fred Wesley and Maceo Parker. These were two totally different approaches to funk. JB laid down the groundwork. P-Funk, while more psychedelic in the beginning, took over where Sly Stone left off by the mid 70’s in terms of embellishing JB’s basic structure for the music. It was the horns that really did a lot of this of course. And George Clinton knew that. And in 1977 he gave that end of P-Funk its own identity with A Blow For Me,A Toot For You. Here’s my Amazon.com review that goes further into what it was musically.

As probably the most significant horn section in all of funk? The band that Maceo Parker and Fred Wesley led had a lot of different names. They were the JB’s,they were All The King’s Men,they were The Macks and eventually a part of the funky heartbeat in the nervous system of George Clinton’s P-Funk during the mid 70’s. After working as part of Bootsy’s Rubber Band,George decided that the already iconic Maceo and Fred needed a P-Funk era album of their own. And in 1977 they got their chance.

“Up From The Downstroke” is presented here as an extended stripped down variation of Parliament’s original where the collective horn charts interact call and response style to the horn solos. The title song slows the tempo right into the groove with the horns responding directly to Bernie Worrell’s orchestral synthesizer. “When In Doubt,Vamp” finds the horns all playing rhythmically in classic James Brown style.

“Between The Sheets” finds the horns intertwined into a thick mixture of reverbed, liquefied bounding bass and rhythm guitar/keyboard interaction while “Four Play” begins with a singled out funky drum before going into a jazzy rhythm guitar led jam. “Peace Fugue” ends the album with the electric piano tinged ballad that closes it all out with a more melodic style of trumpet solo.

During the time I first listened to this on vinyl? Something about the album lacked some of the rhythmic sauciness and vigor that I was used to hearing out of P-Funk at that particular time. Listening to the vinyl again over a decade later? I realize just how important this album had been in showcasing how musically clean,spit and polished the P-Funk sound actually was during the peak of it’s powers.

Maceo and Fred’s expert horn solos and interactions are explored in ultra sleek productions where time was taken in the studio rather than the often hit and run recording sessions James Brown had often done. This became a model for some of the later studio works of these musicians after they departed from P-Funk. And is a superb example of George Clinton and Bootsy Collins’ prowess as studio producers.

Back when I was first getting into P-Funk,it was during a crate digging experience that I located this album on vinyl In all honesty, it is not as powerfully innovative as Mothership Connection or Ahh The Name Is Bootsy Baby. In a way, that was kind of the point. P-Funk began as a somewhat instrumentally undisciplined psychedelic rock and soul outfit. And the discipline that JB alumni such as Fred,Maceo and Bootsy (mainstays of the Horny Horns) brought their blend of controlled chaos to make sense of P-Funk’s intent. On that level, this album is a crucial stepping stone for P-Funk’s late 70’s peak.

2 responses to “A Blow For Me,A Happy 40 Years For You: The Album Where Fred, Maceo And P-Funk Officially Met At Their Crossroads”